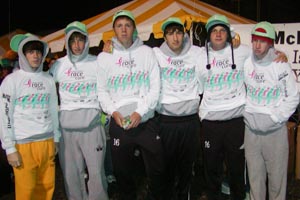 The requirement was implemented by previous Principal Paul Barker following feedback from parents that their student-athletes were unable to fulfill service hour requirements, according to Athletic Director Larry Dukes.  “We thought it’d be helpful to give them a six- to eight-hour opportunity to do it [service] as part of being a team,” Dukes said.

Senior Mackenzie Reese, a member of the women’s varsity basketball team, views participating in team service as a link in connecting the team.  “I love doing service as a team because it is a great bonding experience. We all get to hang out outside of basketball practice and games, which really helps us bond and is one of the reasons we are so close as a team,” Reese said.

Shooting Santas, an event that raises money for poor families at Christmastime, has functioned as the women’s basketball team’s service project for four years, according to head coach Mike Blizzard.

In addition to aiding students, the service requirement was also intended to assist the community.  “I think the requirement for a team to do service as a team helps reinforce the school’s core values as a Catholic school.  It promotes attention to and care for others, especially the poor and marginalized.  And, as an associated benefit, the service experience can be effective in bringing a team together in new ways,” Barker said.

Although the service is labeled as “mandatory,” “there have been exceptions to the rule,” according to Dukes.  “It is only a requirement in the sense that I want the coaches to be active in helping students have service as a priority,” he said.

The team experience is one of the exceptions to the rule.  According to Dukes, if the entire team doesn’t complete service together, it still accomplishes their requirement.  Members of the men’s soccer team running the Susan G. Komen Race for the Cure is an instance of this exception if not all members participate.

According to men’s varsity soccer coach Rodney Johnson, they don’t participate in the race as a team anymore because “getting everyone to the race go to be too much.”

Although “it’s a hope that each team will have the opportunity to do a service project together during the season,” projects do not have to occur in the same season as teams’ sports, according to Dukes.

The men’s wrestling team is an example of this exception, as they have adopted a highway and clean it up throughout the year, rather than just in their season.

Swimming falls under this category as well.  According to Dukes, the team hasn’t completed a project yet this year, but plans to do one later in the year.  Although sophomore Billy Jump, a member of the team, has not participated in service as a team, he thinks that it “would not only benefit those being served, but also the team. Doing service would probably bring the team a lot closer together. I don’t think I would mind the swim team doing any service in the future,” Jump said.

Due to the reasoning that this requirement was put into place for students’ benefit, no one keeps track of the service, and there is no penalty for teams that fail to complete service.  “The whole impetus for it was to make it easier on the students, not to mandate that you have to do service,” Dukes said.  That being said, both Barker and Dukes endorse giving back.

“Put simply, participation in athletics is a privilege.  Yes, students work hard to get on teams and devote many, many hours to training and playing.  They get perks and to do things that non-athletes do not.  So, my view has always been that from those to whom much is given, much is expected.  In a Catholic high school, where we always strive for athletic excellence, it is important that we don’t make wins and losses the be all and end all,” Barker said.

“Service ought to be something you want to do,” Dukes said.

For the men’s basketball team, it appears this statement holds true, as they hold annual service outings.  Along with hosting children from Anna’s House last year, the team volunteered at Our Daily Bread this year, according to men’s varsity basketball coach Tony Martin.  Both this year and last year they teamed up with the Baltimore Catholic League, supporting “the mission of Catholic schools.”  They also helped out on a project for Habitat for Humanity a few years ago with some athletes from the soccer program.

This year, the women’s soccer team hosted Kicks Against Cancer, an event at their game against Spalding which raised over $500 for cancer research, according to head coach Gary Lynch.  The team also aided in cleaning Annie’s Playground, and helped a local recreational team raise money by working at their carwash.  “None of these are looked on as being ‘mandatory,’ but instead an opportunity to give back to the community and thanks for all the gifts and health we have,” Lynch said.

As teams keep the “spirit” of service in mind, Dukes hopes that “participation will get back to 100 percent where it was at one point.  If [teams] don’t have anything in mind, we have lots of things they could do.”

Kailey Tracy is the Copy Chief for The Patriot and jcpatriot.com.