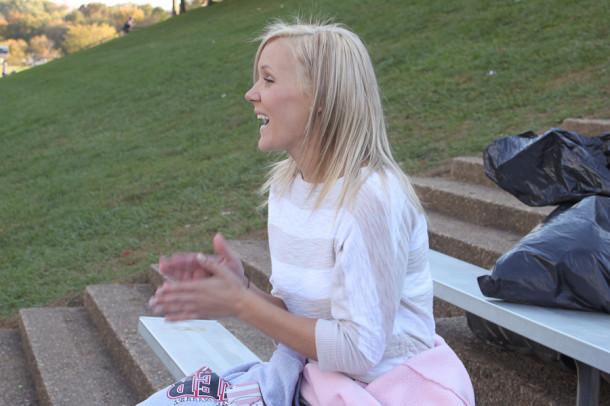 Cheerleading coach Kari Patchak, class of '07, claps for the JV girls during a football game on Oct. 24. Patchak was a cheerleader for four years at JC.

“We are not only improving skill wise but we are improving as a team,” JC cheerleading coach Kari Patchak said. Patchak has been able to advance the team in several ways.

“We are working nonstop on motions, and we are doing more fundraisers,” Patchak said.

Patchak has organized fundraisers throughout the year, including a car wash and a bake sale, through which the cheer team has raised over $800.

“When we had the bake sale, some students didn’t want to buy anything but just wanted to give money to support us,” Patchak said.

One of Patchak’s goals is to gain more respect for the cheerleaders from their classmates, and so far, she believes that she has succeeded. She is also looking to strengthen the girls not only as a team, but also as individuals.

“I try to be their friend but their coach first. I am looking out for their best interests,” Patchak said.

“She is a great coach, and she does her job really well. She has really helped me define who I am as a cheerleader and as a person,” junior Taylor Fitzgerald, a varsity cheerleader, said.

After years of being a cheerleader herself, Patchak knows many things about the sport, which enriches how she coaches.

“It gives me a different point of view because I was always on the other side of things,” Patchak said.

This is Patchak’s first full year of coaching with 36 girls to train. With practice multiple times each week, the cheerleaders prepare for games and competitions.

“She works us hard and takes the time to help us practice. We are going to have an awesome season with her,” freshman Bella Huffman said. She is on the JV football cheer team and the varsity competition team.

“It is very time consuming to be a coach because I am the head coach for all three teams,” Patchak said. The three separate teams Patchak is referring to are the JV and varsity cheerleading sideline teams and the one varsity competition team.

In anticipation of their first competition on Nov. 3, the girls have memorized their routine, and Patchak is now working with them on perfecting it. Patchak sees their routine as unique and ready to challenge other competitors. “We will be ready to compete.”