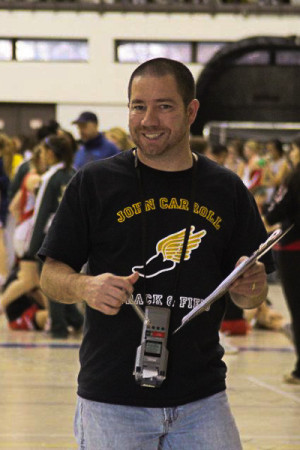 Cross country and indoor track coach Robert Torres finishes timing runners at the Essex meet in 2011. Torres has been coaching at JC for 12 years.

Even with nine other JC championships under his belt, according to Torres, this year’s team is “definitely one of the best teams I’ve ever coached at JC.”

When it comes down to practicing and preparing, “it’s a matter of keeping the team focused on the goal,” Torres said. In the beginning of the season, Torres and his runners focus on building strength. As the season progresses and moves closer to the championships, they begin to focus on improving their speed.

Torres has been coaching, as well as teaching mathematics, at JC for 12 years. He coaches the women’s cross country team with the help of assistant coaches Kayla Stoots and math teacher Courtney Hugo. He also coaches indoor and outdoor track and field in the winter and in the spring, along with Mike Monaghan.

Torres decided to coach because it offered him a chance to continue being a part of the sport he participated in throughout high school and college.

Torres’s first experience coaching was at Archbishop Curley High School, where he was the assistant coach for two years. According to Torres, he went “right out of college to help [his] old coach.” Then, Torres coached for eight years at The Catholic High School of Baltimore, where he won one championship for indoor track.

“I think he’s a great coach, he’s very motivational when we run.  I feel like he makes me run faster when he encourages us during races,” senior runner Emma Imbierowicz said.

Junior runner Erin Cadden agrees. “I think Mr. Torres is a very inspiring coach and he really pushes everyone to try their best, and we wouldn’t have won the championships without him,” she said.

According to Torres, “when you’ve got awesome kids, it makes your job easier.”