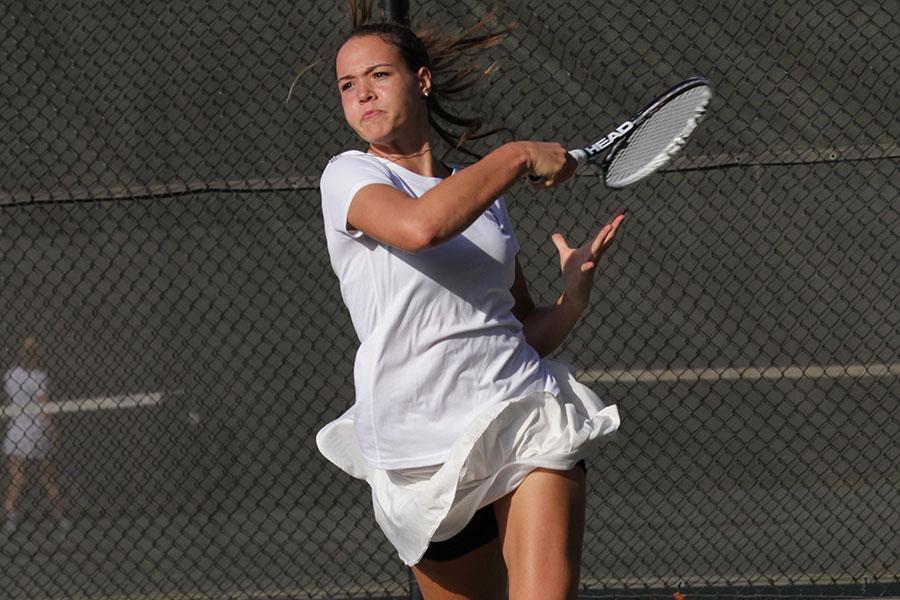 Junior singles player Luisa Schulte hits the ball on her way to victory. Schulte finished undefeated in her first and last season for JC.

The women’s tennis team won the IAAM B conference championship on Oct. 24. Defending IAAM number one singles champion sophomore Alexa Martinez and junior German international student Luisa Schulte live together. Martinez and Schulte both won individual championship titles in their respective positions, but both will not be playing tennis for JC next year. Schulte lives with Martinez and her family for the duration of her stay in America. Schulte came from Germany this year to advance her tennis career and help improve her English.

“It doesn’t matter by how much you’re losing, you can always win the match. That’s why I love tennis so much,” varsity singles player and junior Luisa Schulte said.

Schulte came to the United States from Germany with hopes of increasing her national rank. Tennis is a passion for Schulte that involves rigorous training or tournaments.

She has been to Italy and all over Germany to compete.

“I have learned through tennis that I [should] move on [from] whatever happens [in life] and I must always stay calm and try to make the best out of the situation,” Schulte said.

Schulte has been playing tennis since the age of six after routinely attending her brother’s practices. “I [watched] him play and I just picked it up by [playing] against a wall,” Schulte said. “Eventually I started practicing with a coach.”

According to Schulte, her father has been her greatest help in her career. “He’s always finding new things for me like new techniques or training tips, and his opinion is very important,” she said.

Using an agency, Schulte found a list of American schools based on her wants: a good school with a strong tennis program and a host family who would be welcoming and encouraging.

“I heard that there was a host family whose daughter played tennis very well, so I made the decision [to come to JC],” Schulte said. She was unaware this was the home of sophomore Alexa Martinez, reigning IAAM B conference No. 1 singles champion.

Schulte enjoys staying with Martinez, another highly competitive tennis player. They both sacrifice free time on weekends to travel for national tennis tournaments and have to skip luxuries like sleepovers with friends.

“Sometimes I don’t have enough time to hang out with my friends [because of tennis], but they understand,” Schulte said. “So when I have free time I like to spend most of it with them.”

Despite her acclimation to life at JC, Schulte will not be returning next year. “I really wish I could stay, but I have to go back,” Schulte said. She will most likely return to Germany and will still play competitive tennis during her senior year.

Martinez has been competing for the past eight years and plans to continue playing throughout college.

She will not be playing tennis at school next year so that she can train more and participate in national tennis tournaments. Martinez will still attend JC for her junior year.

“I love [tennis]. It builds character. You always have room to improve and you can always make yourself better,” Martinez said.

During a match, Martinez’s favorite tennis moment occurred when she was 12 years old.

“I won the first set and was losing 0-5 in the second set, but I was able to pull through and win 7-5. It made me realize that you can accomplish a lot of things, even if they don’t seem to be in your favor at that moment,” Martinez said.

Martinez shows gratitude toward her father for getting her into tennis. “He has been the most influential person for me,” she said.

In the past two years, Martinez has defeated all her opponents in her JC tennis matches. She has played against both A and B conference teams in the IAAM. She has made sacrifices to some extracurricular activities in high school such as giving up soccer once she entered high school.

“I usually don’t get to hang out with all my friends during weekends because I’m usually at tournaments,” Martinez said.

She hopes to go on to play at the collegiate level, which is why she will now participate in just tournaments. “I want to focus on getting a higher national rank for colleges,” Martinez said.

The tournaments Martinez competes in range from Virginia for the Mid-Atlantic to Michigan and California for the National tournaments.

According to her teammates, Martinez was an important asset, because of both her talent and character.

“[Martinez] was willing to help the other people on the team who didn’t know how to play, and she never got frustrated with them,” senior varsity doubles player Molly Exter said. “Every time you walked off the court she was the first to congratulate you.”

Although she is leaving the team, Martinez will miss playing for JC. According to Martinez, “I’ll miss spending time with the girls on the team and having fun with the team.”