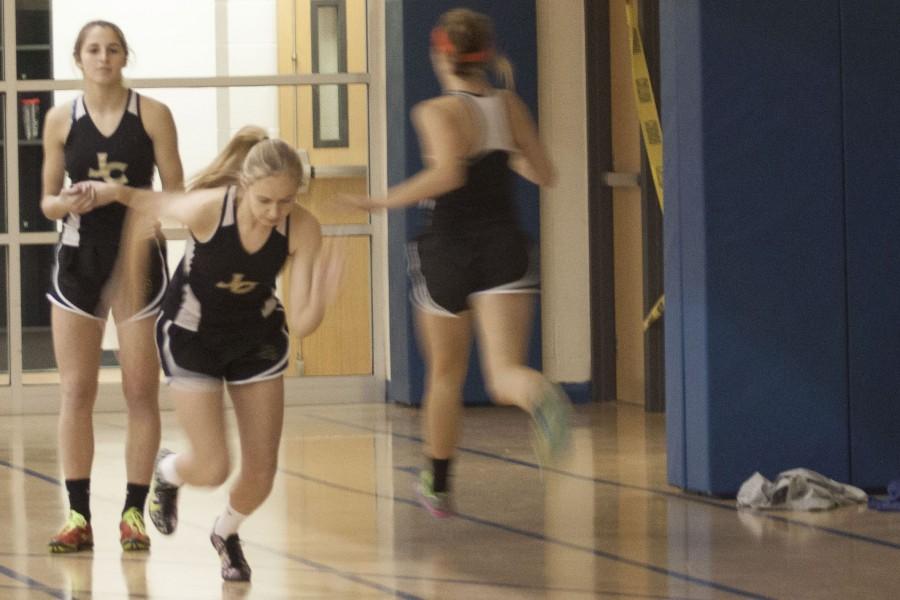 Junior Kristen Isoldi takes off into her leg of the 55 meter shuttle sprint as fellow junior Sam Carey finishes. The other two members of the record breaking team were junior Holly Driver and sophomore Charlotte Haggerty. The team scored a record overall time of 33.3 seconds.

Arms pumping, junior Holly Driver leaps over the final hurdle and blazes across the finish line of the 55 meter shuttle sprint. Her teammates give her high fives as she catches her breath and heads over to indoor track head coach Robert Torres.

Driver, along with juniors Sam Carey and Kristen Isoldi, and sophomore Charlotte Haggerty, had just beaten the school record for the fastest 55 meter shuttle sprint, at 33.3 seconds, at the Loyola Relays meet on Jan. 22.

“Holly went over and asked [what our time was] and was jumping up and down, so I went over to see what happened,” Carey said.

According to Haggerty, the girls do not have much experience with the 55 meter shuttle sprint.

“It was our first time doing it, and it was kind of on the fly,” Haggerty said.

The 55 meter shuttle sprint consists of four parts, two sprinting and two hurdling, each performed by a different runner. Carey, who ran the first leg, said her coaches were “very proud.”

“This is the best combination of four [athletes] in those events,” Torres said. “Holly and Kristen are the two best hurdlers we’ve had, along with Jessica [O’Brien, class of ’06], and Sam and Charlotte are the two best sprinters we have. They’ve tied the school record [for the 55 meter sprint].”

Carey and Haggerty have each tied the school record of 7.4 seconds for the 55 meter sprint, and Driver set a record of 9.1 seconds in the 55 meter hurdle at a Prince George’s County meet in December. According to Torres, Isoldi is “just behind her.”

“We just have a good group, and hopefully next year we can beat our record,” Haggerty said.

Sydney Kirwan in an In-Depth Editor for The Patriot and jcpatriot.com.