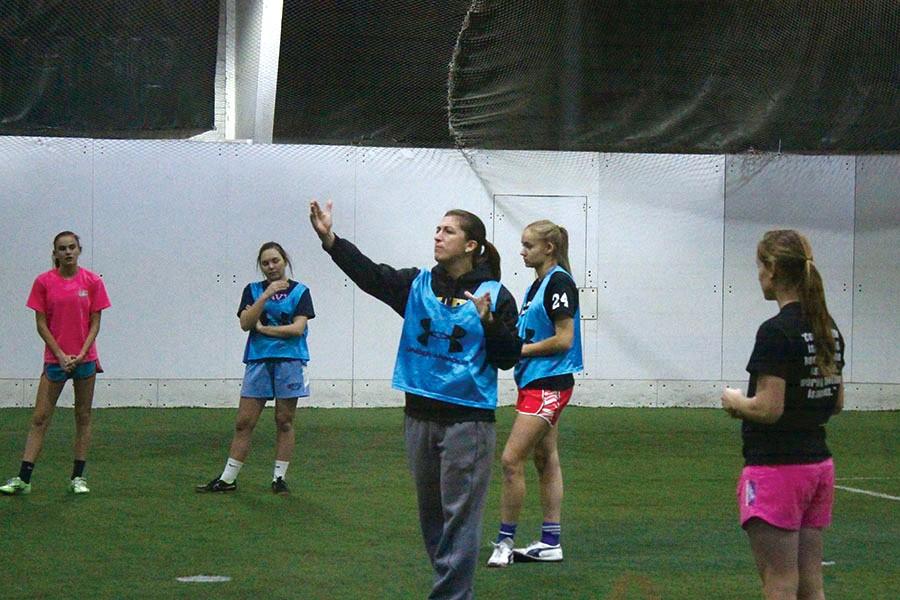 During practice at Maryland Sports Arena, indoor soccer coach Hayley Howe instructs her players on how to effectively pass through opposing defenses. The team lost to Garrison Forest 1-0 at championships Feb. 7.

Indoor soccer coach Hayley Howe has led a strong team all year. The team finished the season with an 8-2 regular season record.

Unfortunately, the women finished their season in a disappointing 0-1 loss to Garrison Forest in the championship on Feb. 7. However, Howe has high hopes for next season.

“Our skill level and soccer intelligence has grown in just two seasons,” Howe said. “More time together building our style of play will only help our program and the individual players.”

Howe has coached indoor and outdoor women’s soccer for two years. Howe sees the indoor season as a continuation of the outdoor season. This year, the outdoor team went 5-7, ending the season with a quarterfinals loss to Severn. According to Howe, the losses were all close games, and the team’s biggest challenge was generating goals.

Previously, she had coached at Catoctin High School, first as assistant coach and then as head coach. According to Howe, Catoctin’s small student base limited its team.

“It’s such a breath of fresh air to be at JC and have girls who are athletes and girls who just play soccer,” Howe said. According to her, the school pulls from a “bigger talent area” than Catoctin.

“Coach Howe really observes our strengths and weaknesses. She does everything she can to improve our way [in] the game,” freshman midfielder Molly Lynch said.

Last year, the indoor team was 7-3 overall, losing 1-2 to Friends School in the championship game. Between last year and this year, the team lost many of its older players. Howe, however, sees her team’s youth as both good and bad, citing nerves as a reason for the championship loss to Garrison Forest but also saying that the girls are “like sponges” and always eager to learn new skills.

“[Howe’s] strengths are realizing what we are doing wrong and things we need to do better,” sophomore striker Caroline Barwick said. “If there is something we need to work on, she will plan a drill for us to do next practice.”

Over the summer, Howe started optional workout sessions for the women’s soccer players, both new and returning. Besides increasing their comfort with each other and the program, the sessions were also meant to get players in shape and ready for the season.

“I saw a difference even in their training and their conditioning,” Howe said. She hopes to continue doing the summer workouts long-term.

“She doesn’t give up on you, and she will work with you on things until you get them right,” Barwick said.

“These young ladies work so hard. Trophies and medals are not the only reasons we play, but I ask a lot of them physically and mentally as JC soccer players,” Howe said. “A championship win is icing on the cake.”