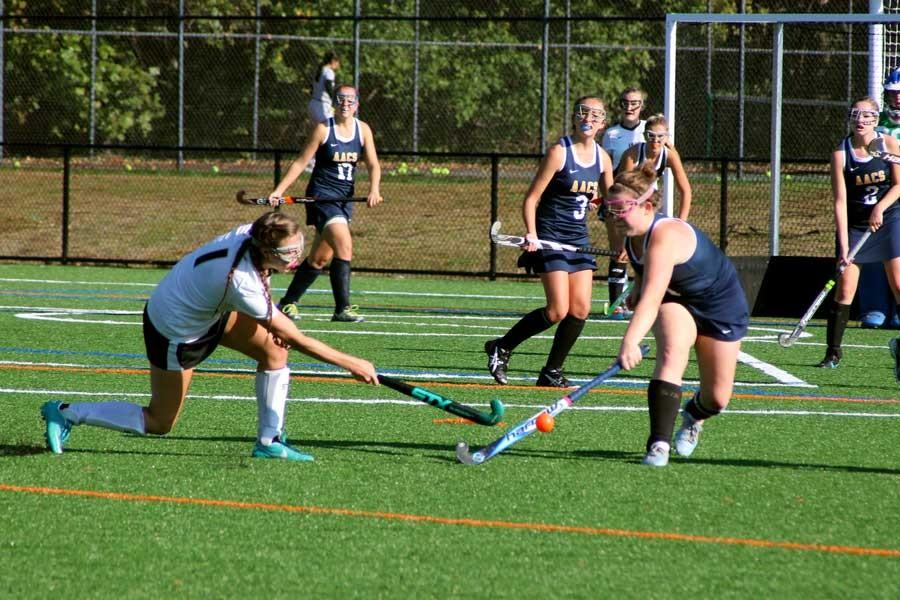 Senior right midfielder and team captain Carly Lyon flicks the ball to the left of the defender to carry the ball into the circle. The varsity field hockey team played against Annapolis Area Christian School on Wednesday and won 5-1 to maintain their undefeated record.

Trying to hold back a rush of tears from flowing down her face, she fails. Legs and back aching, she’s clueless as to why she’s sobbing so much. Confused, senior right midfielder Carly Lyon decides to let the tears flow after the varsity field hockey team’s IAAM B conference championship double overtime victory against Maryvale.

A three year varsity player, and tournament pull up, Lyon believes winning the championship is her most notable honor and accomplishment in field hockey.

The freshman year varsity call-up meant a lot to Lyon’s progress, as she only started playing field hockey in eighth grade. “I played soccer all before and Claire [Grunewald], who was one of my best friends, introduced it to me, and I got bored of soccer. Field hockey was just more fun because of the stick work and skill involved, so I stuck with it,” Lyon said.

Lyon has many memorable moments on the field during her years on the varsity team. One of her coolest stories was during a game in which she was sick. She was locked in, in a battle against a cold, and suddenly Lyon was laid out by a strike to her neck from an Indian Creek player’s field hockey stick. Mucus oozed out of Lyon’s mouth as she prepared to get back up and, to her astonishment, realized she was no longer feeling sick.

That story is especially memorable because it involves her main sport. However, that was not always the case. “Initially, it was just Claire [Grunewald] and me hanging out, chilling, and goofing off. I didn’t take it seriously. But when I got to high school, I immediately knew it was different and started working harder than before,” Lyon said.

Working hard has translated to success and leadership on the field, according to varsity field hockey head coach Gary Scholl. “She provides good leadership through her hard work,” Scholl said.

Lyon prides herself for her hard work. “You want to get better at anything and even after you have, you must push yourself even more, not just for sports,” Lyon said. Her hard work earned her the honor of a team captain this year.

“She is always being positive and getting us ready for the game. She is always ready to take on anything,” senior right defender Sam Carey said. “She is unique through her personality. She has a way to get to you and really make you think you can do something,” Carey said.

Scholl also commented on Lyon’s personality. “She’s funny. Her personality is just charismatic. During practice in a 1 vs. 1 drill, she jumped on Claire [Grunewald],” Scholl said.

While leading the team, Lyon has also learned important lessons from the sport. “[Because of field hockey] I have less time for homework, but that just means I have to manage my time better,” Lyon said. According to Lyon, her GPA is over 4.0.

Along with helping her, field hockey is also a chance to have fun in between schoolwork and school. Her favorite part is hitting the ball. “When you wind up, and you hit it, and it goes all the way down the field, the after-shock that hits you of you doing that, it’s my favorite part,” Lyon said. Immediately after, with a chuckle, Lyon added, “Oh, and the fact my legs are really toned, and I think I also look great in that skirt.”

Lyon practices field hockey year-round, but she also is a member of the varsity swim and outdoor track teams. Alongside those athletic teams, Lyon participates in over a dozen after-school activities.

You’ll also find Lyon at Brooms Bloom Dairy in Bel Air on Sunday afternoons. “I really like Brooms Bloom. I get away from stress of school and homework, and I get to eat ice cream,” Lyon said.

Lyon has seen her on-field characteristics transfer off the field, too. She recently got into throwing tomahawks when she has the chance. “I am definitely aggressive on the field and very unique off the field,” Lyon said.

Looking ahead, Lyon does not plan to play field hockey in college. She plans to major in material science or chemical engineering. Lyon said, “I would [play field hockey] in college, but the major I choose will be too labor and work intensive, and when I go to college, I’m making sure I get all the schoolwork done first.”

In what is most likely her final year playing, Lyon has high hopes for the team. “My goal is not only to win the championship [again], but to have a huge team heart. Skill and endurance won’t win championships, only heart will do that,” Lyon said.