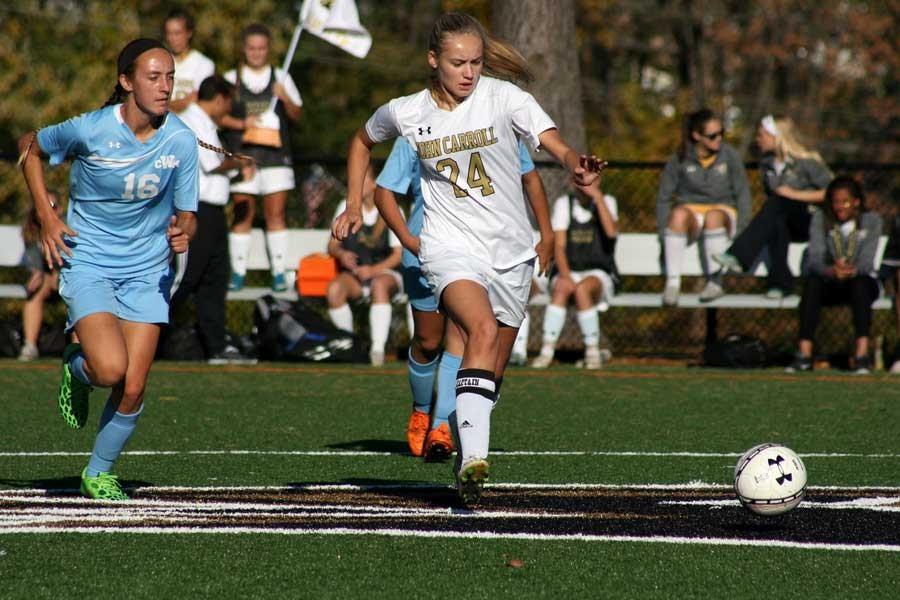 Mary Kate Gerety, Julianna Butta and Kristen Isoldi are three senior captains on the women’s varsity soccer team who, according to coach Hayley Howe, “have brought experience and skill” to the team.”

Four years on varsity is an accomplishment on its own, but creating such a motivating attitude and a family mentality on
the team is what set these players apart from others.

They are the only seniors on the women’s varsity soccer team this year, and are all captains as well.

Gerety plays both forward and outside wing. She has been playing soccer since she was four and enjoys playing the game. According to Gerety, in college she will focus on lacrosse at Hofstra University, but will “miss playing soccer.”

“Mary Kate has a self-motivation motor inside her that makes her work so hard at practice and in games. She’s so focused, that when she cracks a smile, you know it’s genuine,” Howe said.

Howe came to JC two years ago and these three senior captains have helped her become not only welcomed to JC, but also make the soccer team more of a family.

“A favorite memory is of my first day at John Carroll. I was unloading my car with boxes for my classroom and Kristen Isoldi was sitting on the brick wall at the front of the building, ran up ahead of me to open the door. At this point, Kristen   didn’t know who I was, and I didn’t know she was a soccer player. It was just Kristen, being Kristen,” Howe said.

Isoldi’s kind and helpful nature translates onto the pitch. She plays any position she is asked to play, but mostly forward. On the field she, “tries to be the best leader possible,” and help her teammates improve, Isoldi said.
Being a leader isn’t always about being serious, but bringing the team together. Butta is a great example of this.

“Julianna has such a relaxed personality. Her sense of humor and love for her teammates can turn negative scenarios right around. On the field, she has excellent vision of the field. Off the field, she does a great Will.I.Am impersonation,” Howe said.

The captains also help keep the younger players under control and confident with their relaxed attitudes.

“Even though we have had some downfalls and setbacks, the season was the best one I’ve had in all of my four years at JC,” Butta said.

Mike Moxley is a Sports Editor for The Patriot and jcpatriot.com.