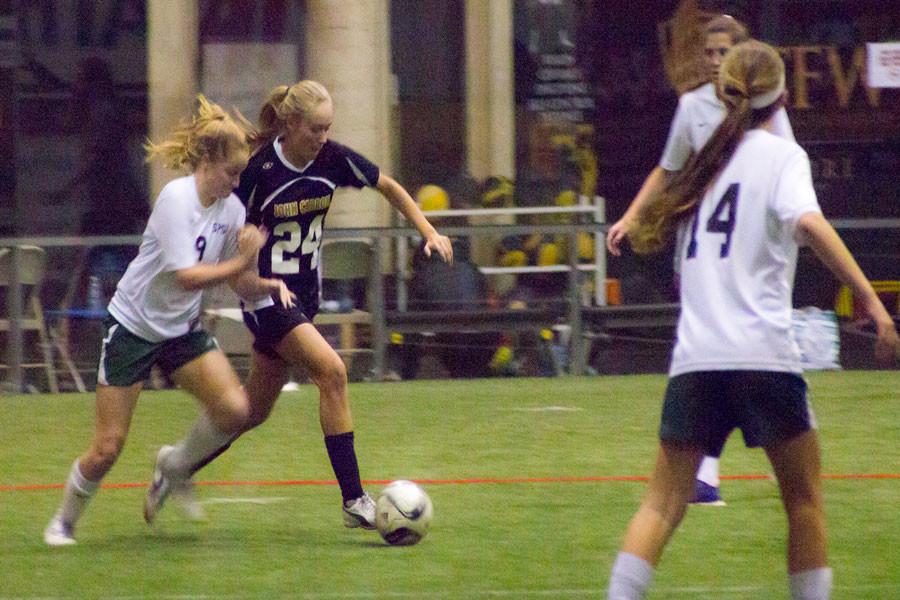 Senior center defenseman Kristen Isoldi dribbles the ball past a St. Paul's player in an indoor soccer game on Dec. 2, that ended in a 8-0 win for the Patriots. The team hopes to repeat their success and make it to the championship.

A run to the IAAM A Conference championship game, only leading to an unfortunate loss to Garrison Forrest, senior defenseman Kristen Isoldi stood in disappointment.

This year, she expects better for her team. “Our expectation is to win the championship and try to let in as few goals as possible,” Isoldi said.

While there weren’t any graduating seniors from the indoor soccer team, the young team built on their skill and gained players, embracing new talent. “We have basically the same team as last year with the help from some freshmen,” junior center back Gabby Centi said.

With the team that was so close to winning the championship last year still intact, the players embraced the three freshmen that were added to their 10-person team: Erin Scannell, Madelyn Cumpston, and Alysa Ross.

“We gained a few great freshmen, so I think we will be just as good as last year, probably even better. The freshmen have great skill and add a lot of talent to our team,” Isoldi said. Indoor soccer is very much different from outdoor soccer according to the players.

Indoor soccer brings an additional element of enjoyment for some players because it is more involved. “Indoor soccer is a fun type of soccer and everyone gets to play because we rotate around a lot unlike in outdoor,” Isoldi said.

Still, practices are just as serious as with outdoor soccer. “Coach Howe runs practices with the same attitude as outdoor, but she has more of a focus on small-sided play, since the field is smaller. We work hard at practice everyday so that we can finally win the championship we’ve been so close to,” Centi said.

The indoor soccer team practices at Maryland Sports Arena each weekday and competes on Mondays and Wednesdays in Du Burns Arena at the Coppermine Fieldhouse in Baltimore from late November to February.

Coach Hayley Howe has high expectations for the season, due to their championship run last season. “With consistent impact players, like Kristen Isoldi, Gabby Centi, and Abby Hormes mixed in with current scoring leaders Stephanie Imbierowicz, Erin Scannell and Caroline Barwick, the team is ready to dominate the league,” Howe said.

Joe Kyburz is a Copy Editor for The Patriot and jcpatriot.com.