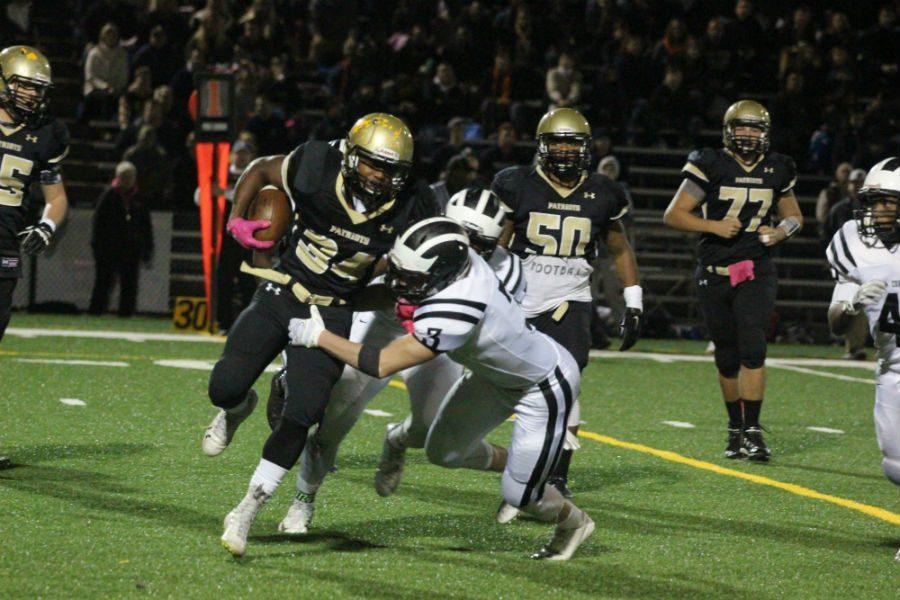 Varsity running back junior Devin Darrington shakes off a tackle during a game against Curley on Oct. 30. Darrington has received 19 Division I offers as a junior and was recently ranked the top running back in Maryland.

Taking notes in math class, junior Devin Darrington anxiously awaits a phone call from the school calling him down to head football coach Keith Rawlings’s office. His mind is fixated on the possibility of receiving a football offer from another well-known Division I college. Over the past few months, receiving scholarship offers, meeting coaches, and visiting colleges have consumed Darrington’s life.

Darrington, a 5’9, 200 lb running back, is currently the top-ranked running back in Maryland, and he is the number eight ranked player overall in Maryland. These rankings have attracted the interest of many top tier programs.

“It feels great to know all of the hard work and dedication has paid off. But the grind doesn’t stop just because a bunch of colleges like me,” Darrington said.

Darrington says his father, Rico Darrington, and his running back coach, Jamal Johnson, have had the most influence on his football journey. “They train with me, but they help me out with things outside of football. When I don’t know what to do or say, I just go to them and they always help,” Darrington said.

Johnson has been working with Darrington for the past year now. He says that Darrington’s versatility as both a running back and as a player overall has changed the most. “When [Darrington] was first here, he was more of a power back. Now, he has developed into an every-down back,” Johnson said.

Through hard work, Darrington has become a faster, better receiver out of the backfield and can run up the middle or to the outside, according to Johnson. “He has become a student of the game, too,” Johnson said.

Darrington’s father has been a big part of his success, too. Darrington says he helps him train, helps with his diet, and puts all his time into his son’s journey to be great. “I’m glad he is willing to help because I know there are other people’s dads who aren’t as involved [as he is],” Darrington said.

Johnson and Darrington’s teammates believe that Darrington has blossomed into a leader. “He cares about everyone on the team on and off the field,” sophomore Dorian Woody said. Both Woody and Johnson agreed that Darrington has the gift to motivate teammates and encourage them. “He has a leadership quality that most people don’t have,” Johnson said.

Although Darrington is ranked very high in the state for both running backs and players, he is still working to get his ranking higher. His current goal is to reach the number one overall ranking in the state, but if that doesn’t work out, he wants to at least be in the top three.

Darrington says he will be attending many prospect camps this summer, although he doesn’t know exactly where yet. Nevertheless, Darrington is primed for another dominant season after recording 1,314 yards and 16 total touchdowns last season. “I don’t just work for the offers, I work to be the best athlete that I can be,” Darrington said.