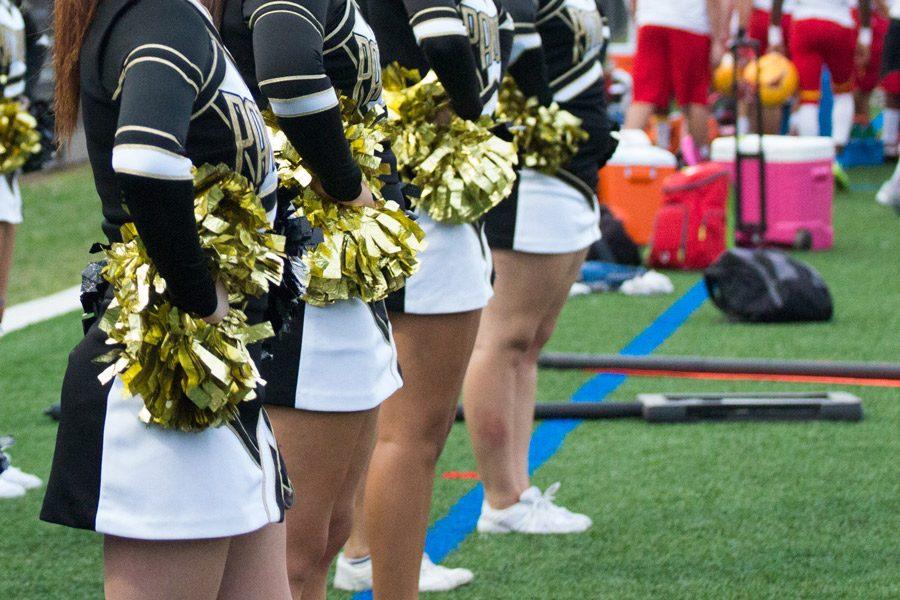 With a new coach in place, the cheerleading program has experienced massive changes this year including the remodeling of the team's structure and the addition of conditioning to the weekly practices. There will no longer be separate JV and varsity cheer squads, but rather one team called "The John Carroll Cheerleaders."

The cheerleading program will face multiple changes in hopes of improving for the upcoming season as a result of Lisa Czwalyco becoming the new head coach.

Rather than having separate JV and varsity cheer squads, Czwalyco is combining the 22 girls into one team and calling them “The John Carroll Cheerleaders.” Although this is uncommon amongst high school teams, it will ultimately benefit the team by making them louder and more unified during games.

“I hope she doesn’t do away with other traditions though, like the senior [night], but otherwise, I think it’s great we get to actually be a team,” senior cheerleader Heather Lanphar said.

Unlike last year where practices were held every day, the team will practice every Tuesday and Thursday from 3:30 to 5:30 and will follow a strict schedule. According to Czwalyco, even though they will be practicing less, the team will be “intensifying the skills and learning process within those practice hours.”

“When we begin practice, I expect the girls to be here and the mats rolled out before I even arrive. Whatever time our [practice] start time is, we start on the dot, no ifs, ands, or buts,” Czwalyco said. The girls then go through a rigorous schedule that consists of conditioning, motion work, stunt training, jump training, and basket toss training.

Every practice the cheerleaders run the perimeter of the fields, hills, and steps as well as practice push-ups, core exercises, and do an organized stretch program. Czwalyco’s purpose for introducing intense conditioning is to help the cheerleaders get into better shape and have enough endurance to perform competitively for a two and half minute routine.

Senior Payton Taylor, who has been on the team for four years, thinks that the conditioning and harder training is a big change for the team and leaves the girls tired and sore after practice. “Last year we would be sitting around for half the practice and now we are constantly moving,” Taylor said.

As of right now, the team is still unsure if they will compete, but a decision will be reached at a later date based on the team’s athletic ability.

While Czwalyco will have a big role in choreographing the team’s routine, she will also hire a professional choreographer to give more insight and add a different perspective in order to put together the most creative routine. According to Czwalyco, all of the funds from parents and the school will be spent on skill advancement and choreography.

“I’d rather spend my money on construction and skill advancement rather than bows, uniforms, matching shoes, and matching socks. I’m not that type of coach,” Czwalyco said. The team will continue to use the old uniforms for another year in order to save money and use it to hire another skills coach.

So far, the reaction to the new head coach has been positive. Lanphar is happy that the program will have more structure and be more organized this year. “The past years everything has kind of been lazy and not done well, but this year everything is direct and on point and intensified to make us better,” Lanphar said.

Taylor agrees and acknowledges the positive impact Czwalyco has had on the team. “She’s a really good coach and knows what she’s doing and has taught us a lot,” Taylor said.

Czwalyco, a former Ravens cheerleader and former dance team head coach at Towson University, hopes that her extensive background in successful programs will allow her to “pass on that knowledge and expertise to the John Carroll cheerleaders.”

Caroline Cooney is the Editor in Chief and Anna Sullivan is an Entertainment Editor for The Patriot and jcpatriot.com.