Senior soccer player looks to the next level 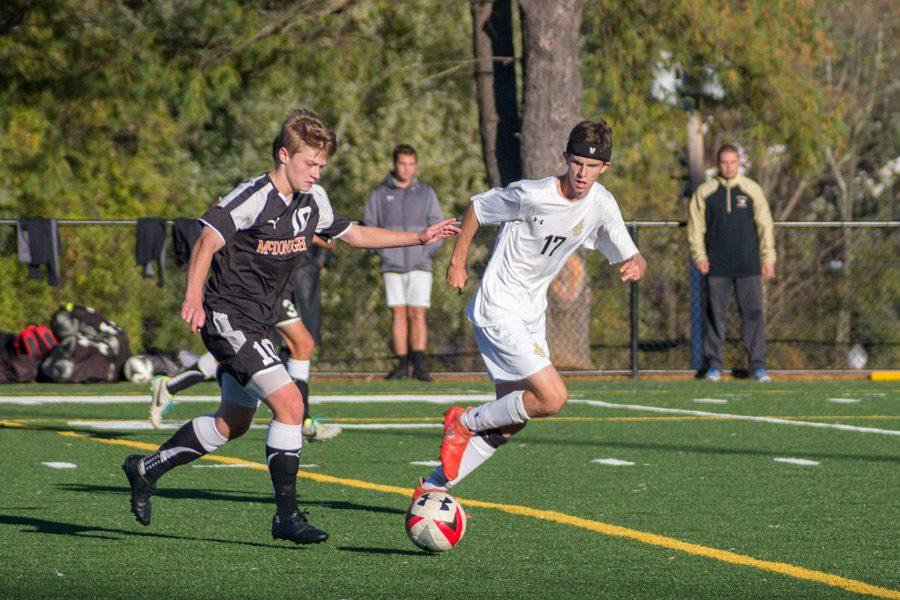 Senior midfielder Andrew Kappel chases down an opponent looking to play the ball to the corner during a game against McDonogh on Oct. 28. Kappel has been on varsity soccer for four years.

Sprinting back on defense, senior varsity men’s soccer midfielder Andrew Kappel runs down an opposing striker. Within a yard of his opponent, Kappel goes to ground and slide tackles the ball out of bounds. His knee is stinging, and he looks down to see blood running over his kneecap. He pulls his sock and covers up the wound, and jogs back on defense. Kappel has suffered multiple injuries throughout his four years, but none have deterred him from getting back onto the field.

Kappel has spent the past four years as a member of the men’s varsity soccer team. Through his junior year, he played right back, but he changed positions to a center midfielder for his senior season. “Kappel established his presence in the middle of the field with timely tackles and recovery runs,” varsity men’s soccer assistant coach Rodney Johnson said.

Kappel didn’t start often during his freshman year, and he suffered a knee injury at the beginning of his sophomore year. However, in the second half of that season, he solidified himself as a starter, a position he kept throughout the next two years. “He’s a strong defensive-minded player who does well with reading gaps in the midfield,” senior center back Jevan Leyh said.

Kappel says spending time with his teammates, especially during practices, was his favorite part of playing soccer the last four years, particularly when the team played a game called “horseshoes,” a popular game played at practice where your partner plays a ball across the field and you have one touch to place the ball as closely as possibly to the cone. “[Nick] Hinke and I were the best horseshoes team ever assembled,” Kappel said, “We went undefeated the whole time.”

After he graduates, Kappel plans to continue playing soccer in college. While he has not officially committed or signed at any college yet, he has options. He lists the University of North Florida, Berry College, Shenandoah University, Randolph-Macon College, and Florida Southern College as colleges he is looking to play at. “I want to play [soccer] another four years at least,” Kappel said.

Overall, Kappel is thankful for his experience with the JC soccer program, and has enjoyed it. “John Carroll has helped me become a smarter player. I’ve gotten better skill-wise and playing alongside some of my teammates has helped me in so many ways,” Kappel said.

In addition to being a four year varsity letterman, Kappel was named to the All-Harford County soccer second team his junior year. The awards for this year have not been announced yet.

“His effort and consistency will be missed,” Johnson said.

Daniel Robinson is a Copy Editor for The Patriot and jcpatriot.org.