Game of the Week: Men’s basketball dominates with a 33-point win over Calvert Hall 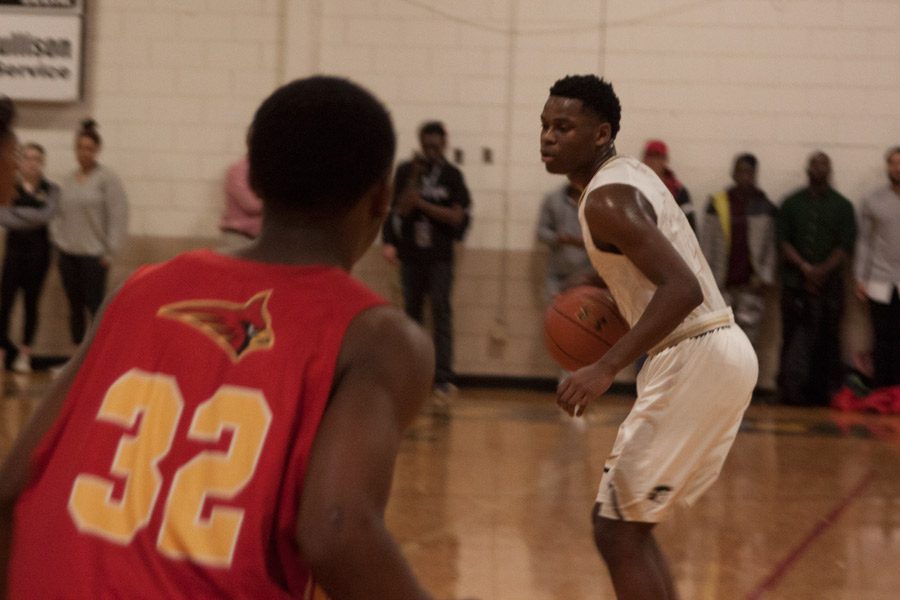 Junior Montez Mathis dribbles away from a defender during a game against Calvert Hall on Jan. 6. JC defeated their rivals with a score of 76-43.

After stealing the ball from his opponent, junior Montez Mathis makes a run towards the opposite basket, flying by each member of Calvert Hall’s team, and jumps into the air, dunking the ball into the basket. The student section in the stands goes crazy, jumping up and down, as Calvert Hall’s fans become more and more quiet, with shocked expressions on their faces.

On Jan. 6, the men’s basketball team faced Calvert Hall College, one of their biggest rivals, in the final game of Friday’s quadruple basketball header. The team won this highly anticipated match with a score of 76-43.

“I thought that they [JC] played very well and it was one of the more complete games we have played,” men’s basketball head coach John Zito said.

Even though this was a key game for the team, the players did not let the pressure go to their heads. “We treat each game the same, and it’s always about us and what we do, so I think they did a good job of focusing,” Zito said.

The audience chanted when Zheng made a 3-point shot shortly after walking onto the court in the fourth quarter, scoring his first points of the season. “At first I played it off, but after I made the three I had to celebrate,” Zheng said.

Late in the third quarter, a majority of the Calvert Hall student section got up and left because of the deficit they faced. “We kind of saw it coming towards the end of the game so it wasn’t that heartbreaking. It was just a tough loss for us,” Calvert Hall senior Ben Alexander said.

Before their early departure, Calvert Hall’s student section was large and engaged in combative chants against the JC student section. “We just had to blow them out and even though they were talking trash we handled business,” freshman forward/center Cam Byers said.

According to freshman Angela Kahoe, “[This game] was amazing and even though I went to other games it was nothing like this.” Kahoe was a member of the JC student section, which contributed to the team’s ability to come out on top.

“Home court advantage is always good and everybody came out to watch and the student section was great,” junior point guard Immanuel Quickley said. “It’s good to beat Calvert Hall, and we really wanted to do this for the school community.”

One reason that that the team feels as though they were able to secure this win is because  of their unity on the court. “We are starting to gel as a team, and together nobody can beat us,” Byers said.

“We had a rough patch at the beginning of the season, but things are starting to click and we’re getting better and better and the tempo is picking up, so it will be a good win for us moving forward,” senior forward Nick Rosaschi said.

“It’s the family mentality. We all have each other’s backs and look out for one another and take care of each other on and off the field,” Rosaschi said.

The team will play Calvert Hall again on Feb. 10.

Elizabeth Harmison is an In-Focus editor for The Patriot and jcpatriot.com.