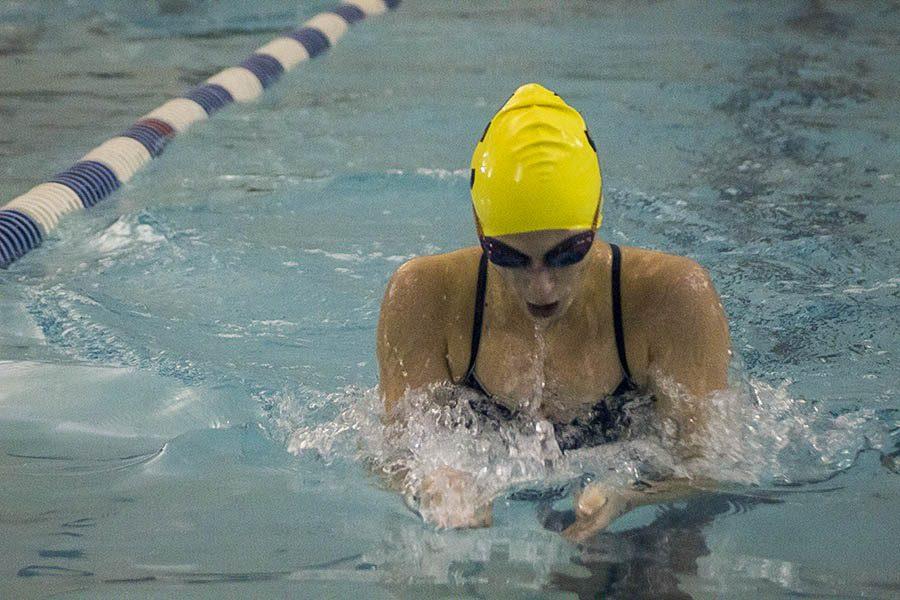 Junior Amelia Wickham leads the women's 200m Individual Medley as she approaches the wall during the breaststroke leg of the race. Wickham finished in first place in the 200m IM and second place in the 100m breaststroke.

Adjusting her goggles, junior swimmer Amelia Wickham prepares for the 200 meter individual medley. She steps up on the block, takes her mark, and dives in. Wickham pulls ahead in the butterfly and maintains her lead throughout the backstroke and breaststroke. She pushes through the final 50 meters of freestyle and finishes first in her first meet as a Patriot.

As a homeschool transfer, Wickham may be new to JC, but she isn’t new to the pool. She swims year-round for the Bel Air Athletic Club, which she has been doing for three years now. “I used to play soccer, but that didn’t work out too well,” Wickham said.

For JC, she swims in many events, including the 200 meter individual medley, 100 meter breastroke, the 200 meter medley relay, and the 200 meter freestyle relay. “She’s a very versatile swimmer willing to swim whatever [event] we ask her to,” swimming head coach Larry Dukes said.

Wickham has already been successful on the high school swim level, winning first place in the 200 meter individual medley and coming in second in the 100 meter breastroke in the team’s first meet on Wednesday, Nov. 3. In the team’s next meet, Wickham finished first in the 100 meter breastroke and second in the 200 meter individual medley.

Lately, however, Wickham has not been able to swim as many events as she is used to due to injury. “I’m having back and shoulder problems and they have been hurting really badly lately,” Wickham said.

So far, Wickham’s favorite part of the season has been the interaction with her teammates. “Everyone was very welcoming [to me]. They were all cheering for me at my first race,” Wickham said.

Her teammates have noticed her work and swimming talent. “I’ve been swimming with her for a couple years,” junior swimmer Mallory Smith. “She’s talented, very talented. Swimming comes naturally to her. You can tell that as soon as she gets into the water.”

This is the first high school team that Wickham has ever been on, and she has enjoyed it immensely. She hopes the rest of the season goes just as well as it started. “I’m having a ton of fun and am building good relationships,” Wickham said.

Daniel Robinson is the General Staff Member for The Patriot and jcpatriot.com.