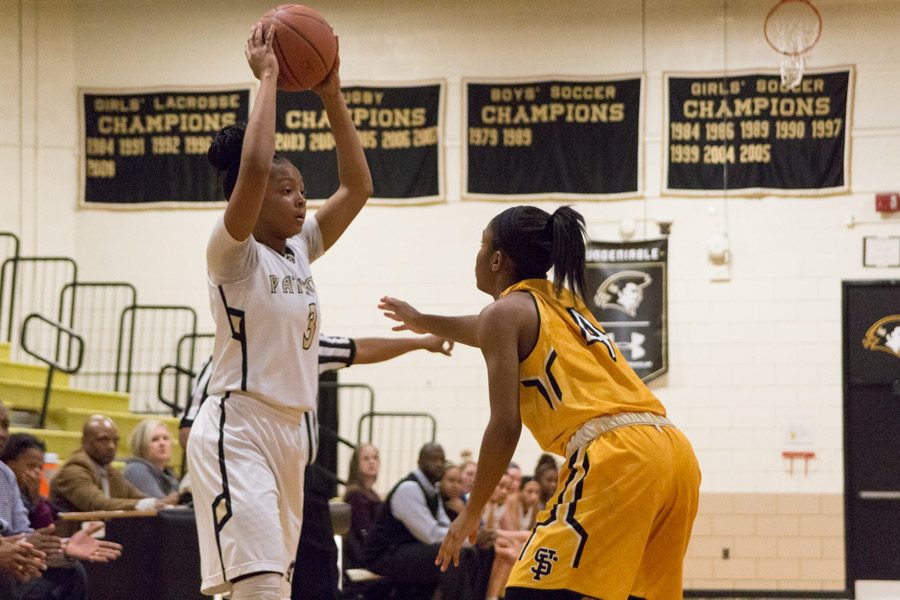 Junior Branyelle Carillo searches for an open teammate to pass the ball to while being closely guarded by an opponent. The women's varsity basketball team was defeated by St. Frances 42-60 on Jan.19.

On Friday, Jan. 20, the women’s indoor soccer team travelled to Du Burns Arena in Canton, Md. for their final game before playoffs. They played Friends School and tied with a final score of 2-2. The team’s final record for their regular season is 6-1-3.

The women’s basketball team played two difficult games this week, playing the teams currently ranked number one and two in their conference. The first game was at home against St. Frances on Wednesday, Jan. 18. They lost with a score of 42-60. Then, on Friday, Jan. 20, they travelled to McDonogh School, but lost 46-68.

The women’s swimming team competed in their final meet of the regular season on Thursday, Jan. 19. They travelled to McDonogh School, and lost 63-90. Sophomore Kaelyn James thinks this meet, along with the rest of the season, went well considering the circumstances. “Thursday’s meet was very hard because of how strong the other team was, but I think we did the best we could,” James said. “I think the team performed very well considering we had a lot of first year swimmers and everyone improved throughout the season.” The women’s swimming team will travel to McDonogh School once again for their championship meet on Sunday, Feb. 5.

The equestrian team had a busy weekend, competing in two horse shows back-to-back. The team travelled to Autumn Grove Stables in Berlin, Md. on Saturday, Jan. 14, to compete in an Interscholastic Equestrian Association Show and won first place. The team travelled to another IEA Show the next day at Garrison Forest School, where they won first place once again. Key members of the team who helped secure these victories include senior Selina Petronelli, junior Haley Ferguson, and sophomore Erin Mirabile. “We have gotten some good draws for horses and our coaches have picked wise point riders for each show,” senior Ally Whitehead said. “We plan to keep it up by a lot of practice and studying the horses.”

The men’s basketball team had a busy schedule this week, playing three games. They played Loyola at home on Tuesday, Jan. 17, and won 69-55. On Friday, Jan. 20, they travelled to play the top team in their conference, Mount Saint Joseph High School, and  lost 45-74. The team came in on the weekend to play a home game on Sunday, Jan. 22. They played against St. Maria Goretti High School and lost 70-73.

The men’s swimming team travelled to McDonogh School on Thursday, Jan. 19. They lost with a final score of 50-81.

The men’s wrestling team hosted a tri-meet on Wednesday, Jan. 18. They lost to Archbishop Spalding High School 24-54, but won against Havre de Grace High School 58-24. On Saturday, Jan. 21, they hosted the Patriot Duals Tournament. As the team’s last home wrestling match of the season, Saturday was considered to be the team’s Senior Night. Five teams travelled to participate in the tournament. The wrestling team beat Friends School 57-12 and Archbishop Curley High School 45-36. They lost to St. Paul’s School 18-61, Sparrows Point High School 16-59, and Chantilly High School 27-34.
Christina Giovanazi is a Sports Editor for The Patriot and jcpatriot.com.