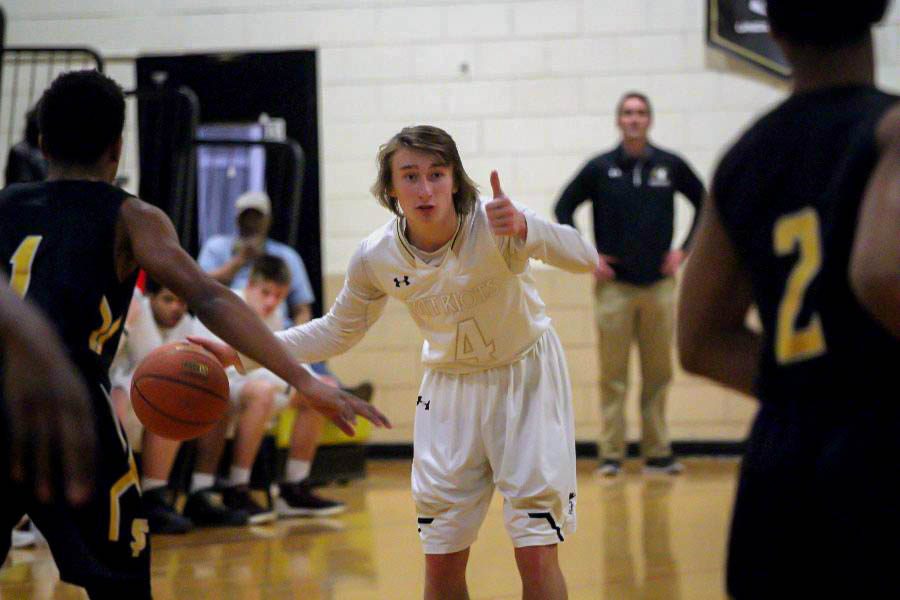 Senior guard Alex Wroe calls a play while dribbling the ball during the senior game on Feb. 17 against St. Frances High School. The Patriots were defeated 55-73 by St. Frances, making their record 14-9.

On Tuesday, Feb. 14, the women’s basketball team competed in the IAAM Quarterfinals. They faced Roland Park Country School away, and lost 38-62. This game marked the end of the team’s season, but junior shooting guard Cassidy Kupchinskas is optimistic about next season’s playoffs. “One area that our team could improve on is just our skill work,” she said. “I know that some of my teammates are already in the gym getting better and I have no doubt that next year we will be putting ourselves in a very good position to go far in playoffs.”

The equestrian team won first place in the IEA Zone 3 Regional Finals on Saturday, Feb. 18, and Sunday, Feb. 19, at McDonogh School. The team beat Full Moon Farm by one point. Seven riders placed in events to support the team’s win, including first place winners senior Selina Petronelli in jump and sophomore Erin Mirabile in flat. The team qualified to compete in the IEA Zone Finals on Mar. 5 and 6, where they will face individual riders and teams from Maryland, Delaware, Virginia, West Virginia, and North Carolina.

The men’s basketball team played three games last week. On Monday, Feb. 13, the team traveled to St. Vincent Pallotti High School, where they won 79-76 in overtime. Then, on Wednesday, Feb. 15, the team traveled again to face Loyola Blakefield School and won 71-65. They finished the week with a home game against St. Frances Academy on Friday, Feb. 17, which they lost 55-73.

The wrestling team competed in a state tournament at Harford Community College on Friday, Feb. 17, and Saturday, Feb. 18. The team placed 11th out of 17 teams. Three wrestlers placed in the top six of their weight classes: junior Adam Berg placed fourth, senior Eric Ashton placed sixth, and freshman Matt Mitrega placed sixth. These three wrestlers will compete in the National Prep Wrestling Tournament at Lehigh University this weekend. Mitrega is excited to advance to the National Preps. “Its one of the best feelings in the world because I have worked so hard for it,” he said. “The team did good overall even though we were missing three starters,” he said.

Christina Giovanazi is a Sports Editor for The Patriot and jcpatriot.com.