Playing with a purpose

After facing the loss of a teammate, the men’s baseball team rallies for their “10th man” Josh Hamer, class of '19, pushing themselves past their limits in his honor 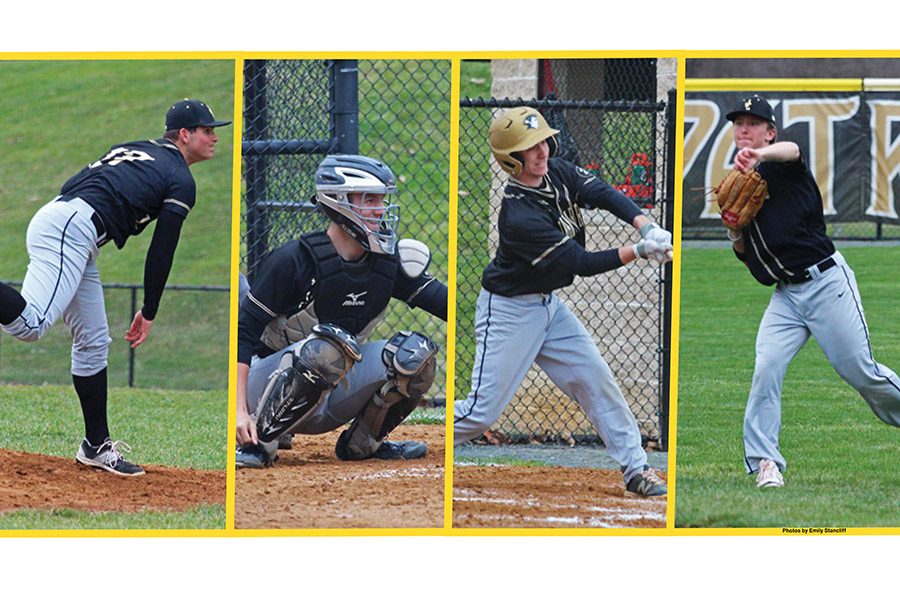 Last pitch. Make it good. Let it fly. Junior Ryan Archibald stares down to home plate, hunched over, looking for his catcher’s call. It’s a fastball, and Archibald straightens up with a nod, adjusting his hand positioning in his glove. “Fly high,” he mutters. He draws his leg up and the ball is away, tumbling through the air with a spray of dust. It’s a strike.

In the wake of the startling, tragic death of star pitcher Josh Hamer, class of ’19, the baseball team has taken their grief and turned it on its edge. They started the season strong in their spring trip to Emerson, GA, where they won three games and lost one. Currently, the team’s in-conference record is 2-3, with their most notable win coming against McDonough School 10-0 on Saturday, March 25.

Varsity head coach Darrion Siler attributes his team’s strength to their dedication and unity in the face of hardships. “We have a lot of people that have shown a tremendous work ethic and have shown dedication to the team. Anyone out there on the field at any time when given the opportunity can impact the team in a positive way,” he said.

According to senior Arri Stakias, the team has a great level of depth and skill this year that has contributed to the team’s success.
“The team so far is looking really good. We have strong pitching, strong defense, strong offense. If we play together and stick together as a team, play like the brothers that we are, play for Hamer, then I think we have a very good chance of winning it all,” he said.
Archibald concurred with Stakias, and noted the team’s strong bond, which has helped them to play even harder. “Hamer’s passing has really brought the team together and closer. It gave us something to bond over and it’s something to play for, for him and his mom. It’s a big deal because we want to represent him, and he’s always the 10th man on the field,” he said.

All of the members of the team feel equally empowered to honor Hamer in everything that they do. The team has even come up with new tributes to their fallen teammate. “Before we go out on the field, we say ‘1, 2, 3, Hamer.’ I think Coach Siler is working on getting a sign on the fence that has a circle, his number, and his name. His mom, on Monday, [April 3, threw] the first pitch,” Archibald said.

The JC community has also helped out tremendously to support the team as they hope to make their run to the playoffs. “[The community] has supported us very well due to everything. They’ve been more supportive now than in the past. Their support makes us want to play together because we don’t want to let them down. We want to show them we are a force to be reckoned with,” senior Ryan Waugh said.

Not only has the JC community reached out, but many schools have also shown their support through several different mediums. “Just about everybody in the MIAA has reached out in some way, even all of the local public schools. Dulaney [High School] made us these amazing wristbands that say ‘JH’ on them. I’ve gotten cards from pretty much all of the public school programs. Coaches have reached out, called, and texted me,” Siler said.

The team was extremely touched by these gestures, and according to Siler, the support is appreciated now more than ever. “Any time there is a tragedy like this, it certainly gives you perspective to what’s important and you just never know from one moment to the next when your time to go is. The baseball community has been really great in showing us the care and support that we’ve received. So we’re extraordinarily grateful for all of that,” he said.

Overall, the team is excited for the season and more motivated now than ever before. “There’s not more pressure but more of an incentive to succeed. We have so many more people watching us, and we want to do well for them,” Waugh said.

Although the team is excited, they also noted that they have to stay focused and just play the game. “We just go out there and play to the best of our abilities as much as we can. You can’t go out and think too much because that’s when you get yourself in trouble,” Archibald said.

The team will continue to hold Hamer in their memory as they make their run to the playoffs, hoping to win the championship in his honor. “He’s our number 10 player on the field at all times, that’s for sure. Number 25 is always with us,” Siler said.