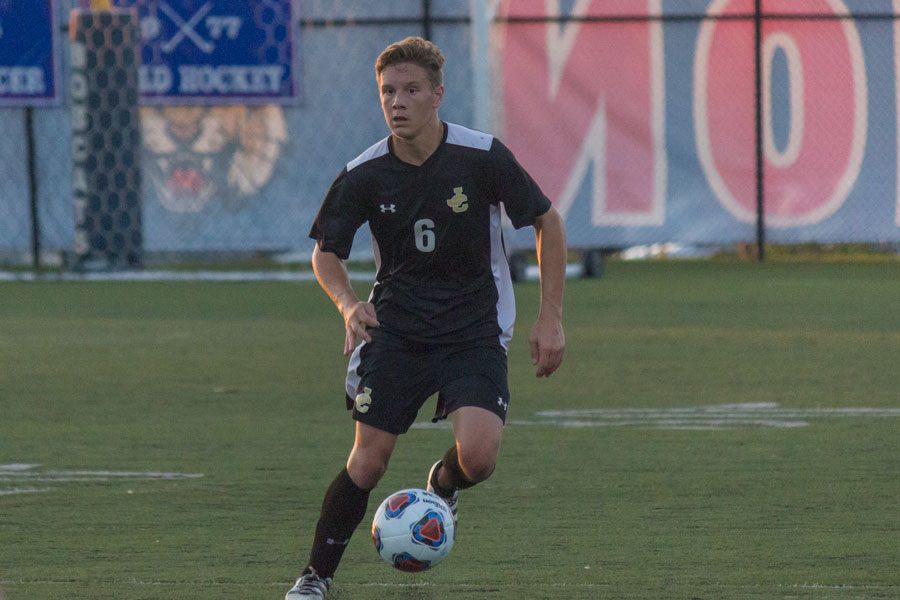 On Oct. 6, Calvert Hall hosted both the men’s and women’s varsity soccer teams for a Friday night doubleheader. The women’s team faced Mercy High School at 5 p.m., and the men’s team played Calvert Hall at 7 p.m. JC won both games with a score of 2-1.

The most recent high school sports rankings by The Baltimore Sun on Oct. 3 placed Calvert Hall at number 12 and Mercy at number 14. Both JC soccer teams were not ranked.

For the women’s team, Friday night’s game was an opportunity to regroup from their 3-1 loss at home to Mercy on Sept. 28. However, Mercy came ready to send the women’s team home with a loss on Friday night at Calvert Hall. Less than 20 seconds into the game, Mercy forward Ada Claire Tempert scored.

JC outside midfielder senior Molly Lynch also scored with 28 minutes left in the first half. This was the first goal of Lynch’s high school career. Senior Callie Courtalis scored the team’s second goal midway through the second half.

According to Lynch, junior defensive back Lexi Burch was a key player and helped shut down Tempert, Mercy’s top goal scorer.

The doubleheader produced a large crowd at Calvert Hall’s soccer field, but Lynch said that it only helped motivate the team to win. “[Our energy] was almost like a quiet storm. We were all excited, but you couldn’t really tell because we just wanted to win,” Lynch said.

Women’s soccer head coach Hayley Howe believed Mercy’s early goal was the turning point in the game. “Our team plays best with our back against the wall and under pressure. We dominated afterward and really came together as a team,” Howe said.

As playoffs approach, Howe wants her team to “continue to play better soccer and to hit their stride at the end of the season,” she said. The women’s team currently sits in a three way tie for third with Notre Dame Preparatory and Mercy.

After the women’s game concluded, Calvert Hall and JC men’s varsity team took the field. The men’s team looked to bounce back from a 3-2 loss in double overtime against Calvert Hall on Sept. 13.

“I think it’s more of a big deal for [the team] than it is for me. I spent four years at Calvert Hall. I’ve been here for 12 and the head coach for eight,” head coach James Fendryk said. However, Fendryk also said it was good to see friends and former teammates, but on the soccer field, “it’s all business, and my allegiance is here [at JC].”

Calvert Hall’s team, like Mercy, had a fast start to the game when Calvert Hall junior Camden Ohrin scored in the first two minutes of the game. JC junior forward Hayden Gaeng scored an equalizer a few minutes later to tie the game, and the score remained 1-1 until the end of regulation.

With four minutes left in the first sudden death overtime, JC junior Jordan Remeto passed the ball inside the 18 yard line to Gaeng. Gaeng shot and scored low near the right goal post for the game winner.

Gaeng believes the team played well, especially the midfielders, due to the atmosphere. “We knew there were going to be a lot of people there, which was exciting because usually around John Carroll there aren’t that many people that show up,” Gaeng said. Fendryk believes close to 1,000 fans were in attendance at the men’s game.

“It means a lot. We really needed that win going forward because that gives us a good opportunity to make the playoffs,” Gaeng said. The Patriots are in the hunt for sixth place in the “A” conference standings, which is the last position in the playoffs.

“Once we make it [to the playoffs] anything can happen. Any team can beat each other, and that’s what we are trying to do,” Gaeng said.

Sarah Spaeth is a Copy Editor and Chris Roberts is a Sports Editor for The Patriot and jcpatriot.com.