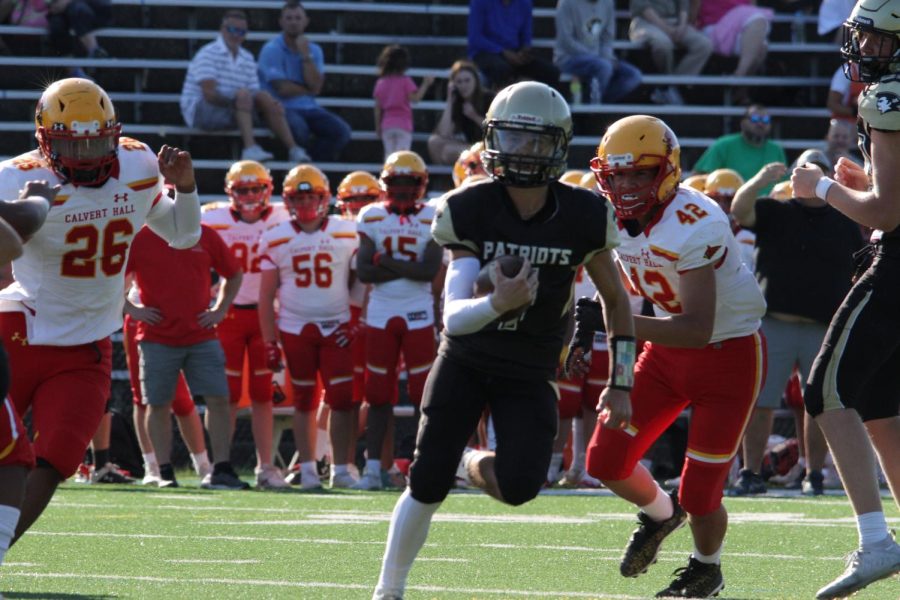 JC is filled with students from dusk to dawn, several of whom can be seen participating in athletics all over campus.

As you walk passed Field One, you see the varsity football team. The team is under the leadership of Coach Ken Brinkman.
He said, “It has been such a great feeling to be back out on the field this year.  Last year was so hard, only playing one game.  I am truly excited for our players and families to be able to see us play this year.”
Both the cheerleading squad and football team celebrated their senior nights September 17.
Senior Jensen Perkovich said, “Celebrating Senior Night was one of the highlights of my time at JC.”
Somewhere outside, the varsity cheerleading team is practicing. Mrs. Carrie Siemsen the head coach for cheerleading commented, “Our cheer season has been very productive so far.  We’ve been able to accomplish a great deal of previous and new skills, even though we only practice twice a week.”
Also on Field One you can see the varsity boys’ soccer team.
Senior Eric Schultz is a captain of the boys team. Regarding the season, he said, “There’s always going to be ups and downs with soccer, but I’m impressed with how we have done up to this point, especially with such a young team.”
Boys Soccer’s Senior Night will be on Friday, October 1.
As you pass Field Two, you can see varsity girls field hockey coached by Ms. Caroline Haggerty.
Senior Kamyrn Rittmeyer said, “There isn’t a day of field hockey that the team isn’t having fun while playing on the field.”
Also, on Field Two you can see varsity girls’ soccer coached by Ms. Hayley Howe.
Senior Sophia Sotirakos said, “This season has been so fun so far.”
Passing by the tennis courts you can see girls varsity tennis practicing. Mrs. Angela Ward the head girls tennis coach said, “The season is going very well. The girls are excited to be having a normal season.”
On the way to the Upper Gym, the boys and girls cross country teams race passed the oval.
The varsity boys cross country team is hard at work preparing for their meet. Mr. Michael Monaghan is the head coach.
Mr. Monaghan said, “Our season is going well. Training has been productive, and we have won our first two competitions of the season. Getting back to a normal routine has been terrific. ”
Senior Jackson Holschuh said, “The season is going well. Everybody ran a personal best at our first meet and then at our second meet, we won by a lot.”
The varsity girls cross country team coached by Mr. Robert Torres is also hard at work preparing for their meet. Junior Victoria Novak said, “The team is excited to finally be back competing. We all didn’t realize how much we missed racing and training together. We are super excited to show off our hard work throughout this season.”
In the Upper Gym, boys volleyball practices their hits and bumps coached by Mr. Tucker Snow and Mr. Matt Blair. Volleyball Team Manager Colin Westermeyer said, “The boys look really good this year. We have a strong team.”
Finally, as you enter the Lower Gym the girls volleyball team is preparing for their season. Mr. Joe Scheide has returned as the head coach.
Senior Mia Rosso said, “Mr. Scheide is a great coach who has helped the team improve during a rebuilding season.”