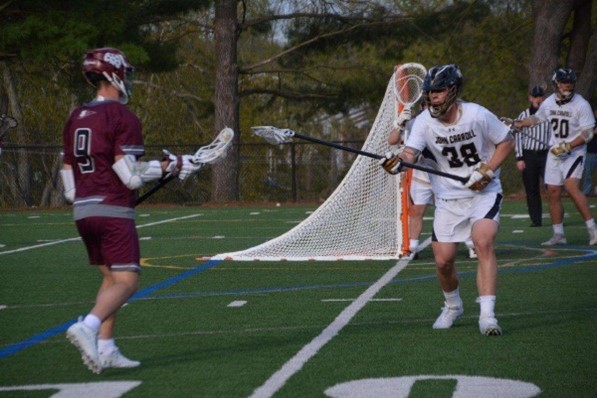 With the spring season beginning, junior Josh Schrader puts down the football for a lacrosse stick.

Playing on both the varsity football team and varsity lacrosse team, Josh keeps busy all year round. He began playing lacrosse in the second grade and football not long after that.
While lacrosse is his main sport, football is also a major part of his life. Josh said one of his favorite sports memories was in eighth grade when “my football team just won our second state championship in a row and had gone undefeated.”
For Josh, the balance between football and lacrosse season comes naturally. “As soon as football ends, I start training for lacrosse and vice versa,” he said. The switch between sports allows him to stay active and improve year-round.
Once the fall season had ended, Josh began preseason workouts with the lacrosse team as they all use the same facility. He said, “I have been doing weight training, speed and agility work, and conditioning all off-season with everyone else on the team.”
One of Josh’s main goals for this lacrosse season is to be a part of the MIAA All Conference team. He said, “I want to be someone that all the teams in the league respect.” As a starter on varsity, Josh hopes to be a role model to his teammates and those who come after him.
Josh’s biggest piece of advice to younger lacrosse players is simple: “Work on your stick,” he said. “Expand your arsenal as much as possible.” Having this strong work ethic and putting in countless hours have allowed him to succeed both on and off the field.
Along with being a two-sport athlete, Josh is also a part of the STEAM program. Though balancing schoolwork with sports can be “difficult sometimes,” he recommends “taking advantage of off mods” and focusing on “time management.”
Looking into the future, Josh hopes to commit to a Division One college for lacrosse and major in engineering.