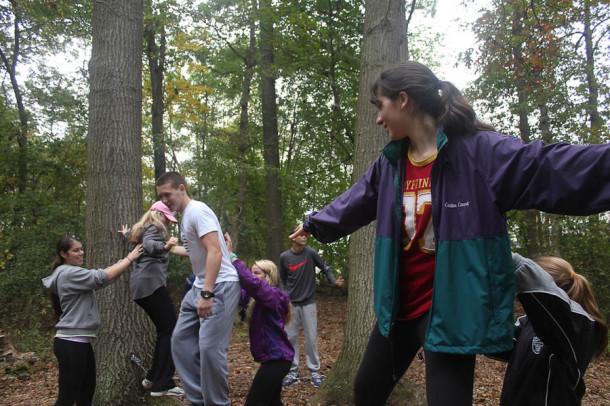 On the bus ride back from the senior class trip to Genesee Valley, I sat drenched and cold from the rain, as well as tired and hungry from the day’s activities. All I could do was think about the nice, warm shower I would take when I got home and what I would have for dinner. Despite how uncomfortable I and everyone else may have been, no one on the bus was really complaining. Everyone was just happy to have enjoyed a trip together as a class for bonding and building teamwork skills.

On Oct. 7, the senior class took a class trip to the Genesee Outdoor Learning Center in Parkton, Md. to promote class bonding. Because senior retreat is generally the main bonding experience for seniors, many alumni have complained that spring is too late to start getting closer to your classmates. They wished there was an earlier opportunity to help the class become more unified. This trip was an attempt to jump-start the senior class bonding process by coordinating an event earlier in the year.

As much as I agree that it is awesome that we were given this opportunity to bond before senior retreat, I feel like the timing was a bit off. The day chosen was in the middle of quarter one, a very busy academic and athletic time for students.

It would have been better if the day was right in the beginning of the school year. There is no need to put off something that will have only a positive and unifying effect on the senior class. Even the first week of school would be a good option. Scheduling an earlier trip would involve less school work and activities to work around,  which would avoid added stress and pressure to students’ already hectic lives. It would also help the senior class, as leaders of the school, to come into the school year unified as a class ready to set a good example for the underclassmen.

As for the date, the only other downside was the unpredictable weather conditions. While the trip was rain or shine, shine would have certainly helped make the experience more enjoyable. Possibly making the trip earlier in the year would decrease the possibility for a rainy day next year because rain is less common then.

Genesee Valley itself is an incredible facility with rope challenge courses and many other outdoor learning games. While it is hard to explain fully what it is like, Genesee Valley has a variety of activities that work to promote everything from teamwork and bonding to individual challenges and personal growth. Whether it’s climbing 30 feet in the air or tossing around tennis balls, every activity has a lesson to be learned.

The activities were extremely well geared towards bonding and teamwork, which was exactly what seniors hoped to accomplish. However, there were some downsides.

Split into small groups of about ten students with one JC teacher and one Genesee Valley leader, students went separate ways and did different activities. This became upsetting for some students who did not get to do as much as others. In some ways, this was partially due to the weather conditions that forced some groups inside, but changes could be made in the future.

One possible solution is that all students could do one similar activity, like a rope course, periodically throughout the day and take turns as it is available. Meanwhile, everyone else can alternate around a few of the same activities, and then, every once and a while, teams could pick the activities that their group wanted.

The final aspect of the trip was lunch. All of the seniors were given McDonald’s for lunch, but the lunch was late arriving and many groups had to lose time waiting for their lunch to arrive.

Additionally, Genesee Valley is a “pack-in pack-out” facility where all the trash you bring in you must take out. At the end of the day, teachers were carrying around ridiculously large garbage bags full of trash from lunch.

As nice as the hot lunch was, it was impractical. If students pack lunches, they can be responsible for their own trash and no one needs to carry around big trash bags. Also, no one would need to wait around for lunch and students would have a healthier lunch for a day outside doing physical activity.

Even though there are many things that can be improved about the trip, it was in no way a failure. In fact, I think it was a huge success, and if improved upon, it can be even better for the future senior classes. This year’s seniors were just the guinea pigs, and yet the trip accomplished its goal to the best of its ability of getting people out of their comfort zones by building bonds, unity, and teamwork. Genesee Valley has me excited for senior retreat.

Hope Kelly is the Editor in Chief of The Patriot and jcpatriot.com.