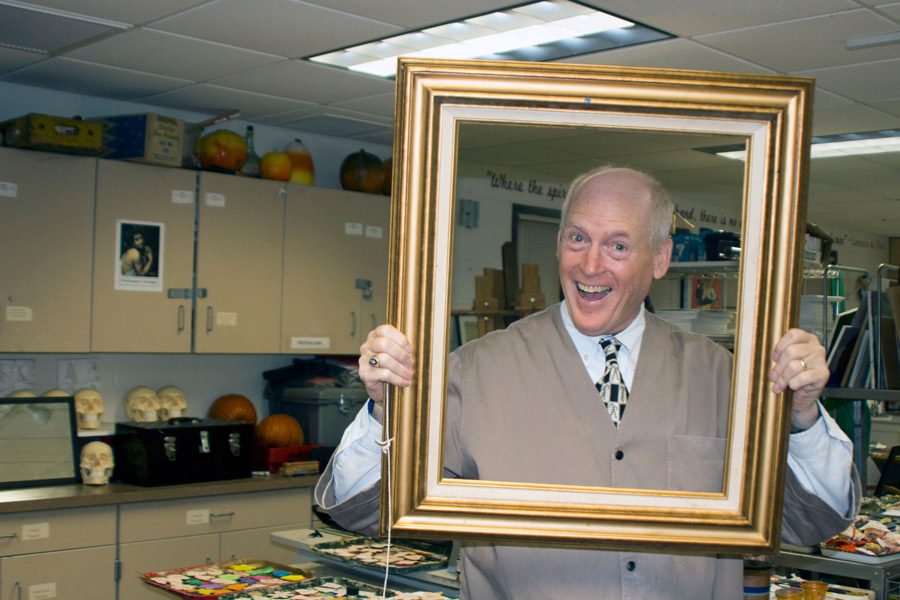 In his usual creative style, Fine Arts teacher Michael Gaudreau, class of '70, poses for a fun picture. After teaching at JC for 43 years, Gaudreau knows how to put a put a smile on anyone's face.

Fine Arts teacher Michael Gaudreau, class of ‘70, sits in his classroom among various student drawings and sculptures. Despite the thin layer of clay that seems to cover everything, Gaudreau seems to be right at home: he is sharing his passion and inspiring others with art.

Before Gaudreau began teaching at JC in 1974, he worked several jobs that he credits with building a foundation in art. For example, he worked in the psychiatric ward at Johns Hopkins University for two years as a child life worker. “I would come up with games for kids ages five to 15 who had all sorts of problems. Some were runaways, anorexic, abused, had suicide attempts, and they were all in this one area of the hospital,” Gaudreau said.

The challenges that those children dealt with opened Gaudreau’s eyes to a side of life that he had not previously thought about. “I realized there was a whole world that I never expected. It was emotionally draining, but it was a wonderful experience,” Gaudreau said.

Gaudreau’s time working in the psychiatric ward at Hopkins taught him lessons that he has carried with him throughout his life. “I learned that it was really hard work, and I could do it. I learned that even with all their problems, kids are still kids,” Gaudreau said.

He also established a basis in working with children at a summer camp throughout high school and college, where Gaudreau helped students with arts and crafts for four years. It was his first experience guiding people younger than him with art projects.

After graduating from JC in 1970, Gaudreau went to Towson University so that he could eventually both teach and create art. Gaudreau explained his passion for teaching, saying, “I always liked showing people how to do things. Whenever I learned things, I liked to show others.”

When Gaudreau was a senior in college, he received a call from the principal at JC, who offered him a job interview. Frank Kelly, Gaudreau’s former art teacher and one of the people that encouraged Gaudreau’s pursuit of art, recommended him as a potential candidate. Though Gaudreau was not specifically looking for a job at his alma mater, he accepted the position and has since been working as a Fine Arts teacher here for 43 years.

According to Gaudreau, the transition to full-time teaching was not difficult. “After my experience at Hopkins, teaching kids that I was only four years older than was easy,” Gaudreau said.

While Gaudreau has formed many memories over his tenure at JC, some of his favorite memories are of seeing his own students’ achievements. For example, Gaudreau thinks fondly about opening night for the plays, where he led set creation for over 30 productions, and about the annual Fine Arts Show.

In addition to pursuing art through a school setting, Gaudreau also actively displays his passion by producing his own artwork as a practicing landscape painter. He has been competing in art shows since 2010 and posts his work on a personal website.

Gaudreau regularly updates his website to reflect his latest accomplishments and paintings. In September, Gaudreau won the Art du Pastel en France Award from the Pastel Society of America for his work “Spring Thaw.” Gaudreau also received second place in the Maryland Federation of Art Show at the Annapolis Maritime Museum in October for his work “Waterworks.”

Though his primary artistic passion is painting, Gaudreau appreciates many other art forms. He collects antiques and children’s board games, reads mystery novels, and watches action movies.

Gaudreau wants his dedication to art to be evident to everyone he meets. “I want people to know that I paint as much as possible,” Gaudreau said.

His favorite spot to paint and create meaningful pieces of art is the outdoors. “I love being outdoors in God’s creation. When I’m working outdoors, I am not just seeing nature, but I am trying to figure it out. I am experiencing nature,” Gaudreau said. “When it works, it is almost like praying, but not that serious. I feel like I have a spiritual connection to the land.”