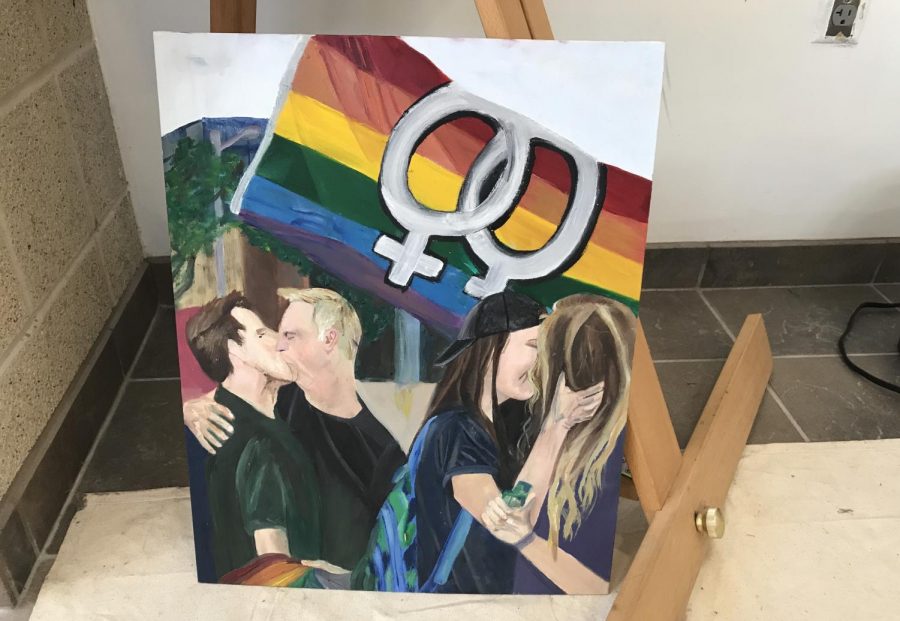 On Thursday, Oct. 26, a painting of a rainbow flag and two gay couples was removed from the Art Wing display in preparation for Open House. According to Principal Tom Durkin, the painting was removed because "We have policies about public displays of affection ... We don't want to make people uncomfortable," he said.

On Thursday, Oct. 26, the administration removed a student’s artwork from display in the Art Wing. The painting, created by senior Nicole Kanaras for her AP Studio portfolio, depicted a rainbow flag and two gay couples in support of gay pride. The painting was taken down two days before Open House, which was held on Saturday, Oct. 28. It was placed back on display on Monday, Oct. 30, two days after Open House.

“I was told it needed to be taken down and not prominently displayed at Open House,” Kanaras said. “It was one of those ‘It’s not the time or place,’ kind of things.”

According to Principal Tom Durkin, the painting was removed because it could make prospective students and families uncomfortable. “At Open House, we invite people into our home. We want to make sure things are clean and straightened up. We didn’t want things out that may bother someone,” he said.

Kanaras says she designed the painting to promote love and peace. She didn’t intend for her work to be interpreted as bothersome. Instead, her purpose was to spread equality among varying sexualities. “I’m just trying to give them a voice. I’m a straight woman, and I have a voice in society. I’m trying to stand up for the ones that don’t,” she said.

In the early stages of the decision, Durkin was uninformed on the subject. “I didn’t see the pictures myself, but we have policies about public displays of affection. It doesn’t matter what gender they are, we just wouldn’t display that whatsoever,” he said.

However, art teacher Erin Stellmon did not report public displays of affection as the Art Department’s reasoning behind the removal of the painting. It was all about, “Keeping a clear vision of what our mission was that day … but I didn’t talk about it as a public display of affection,” Stellmon said.

Open House is mainly run by the Office of Enrollment and the Marketing Office, so according to Durkin, the decision to remove the painting began there. “Enrollment informed me [of the painting], and I simply supported their decision. [They] saw a picture that might disturb some people, and obviously Open House is one of the times we don’t want to do that … We don’t want to make people uncomfortable,” Durkin said.

Removing the painting was done to avoid creating “any unwanted controversy,” Director of Enrollment Edward Maynard said. “My take on it is that there could be families that could be offended by it, and we are a Catholic school, and we should put our best foot forward,” he said.

According to Maynard, he was unaware of any other paintings taken down other than Kanaras’. However, Fine Arts Department Chair Lisa Collins reported one other painting that was censored at Open House this year. The art by senior Christina He showcased a person being choked.

This is not the first year the school has removed paintings. A painting by Conrad Gagnon, class of ‘16, was taken down in 2016 because it included nudity. “As an art student, you have to know the code of conduct of what you can paint in the school, and nudity isn’t allowed,” Stellmon said.

Despite the controversy of Kanaras’ painting, Collins says it created a good conversation for the Art Department. “It sparked a discussion in our department about ‘Should we have some rules?’ Should we have something, maybe written, or some other mechanism for judging what is appropriate, because it is not only Catholic but also under 18,” Collins said.

Some students who heard about Kanaras’ painting were skeptical about both the administration’s and the Art Department’s reasonings for taking the artwork down. For example, junior Angela Boeren has class in the Art Wing while Kanaras has AP Studio. “I think [the painting] was definitely taken down because it was homosexual. I mean, I know she had to go through a lot of hoops to paint it in the first place,” Boeren said.

Junior Sehrish Shaukat agrees with Boeren that the painting was removed for other reasons. “I definitely feel like it [was taken down] because it’s gay, because we are a Catholic school,” Shaukat said.

Kanaras had hopes her painting would be displayed with the rest of her pieces in her portfolio at Open House, just like it had been for the school year so far. “I don’t understand. The school focuses on loving one another, but the second people show it in a certain way, it isn’t okay,” she said.

Alyssa Kraus is the co-Editor in Chief of The Patriot and jcpatriot.com.