The music department practices for the upcoming Christmas Concert, which will be held on Friday Dec. 8. 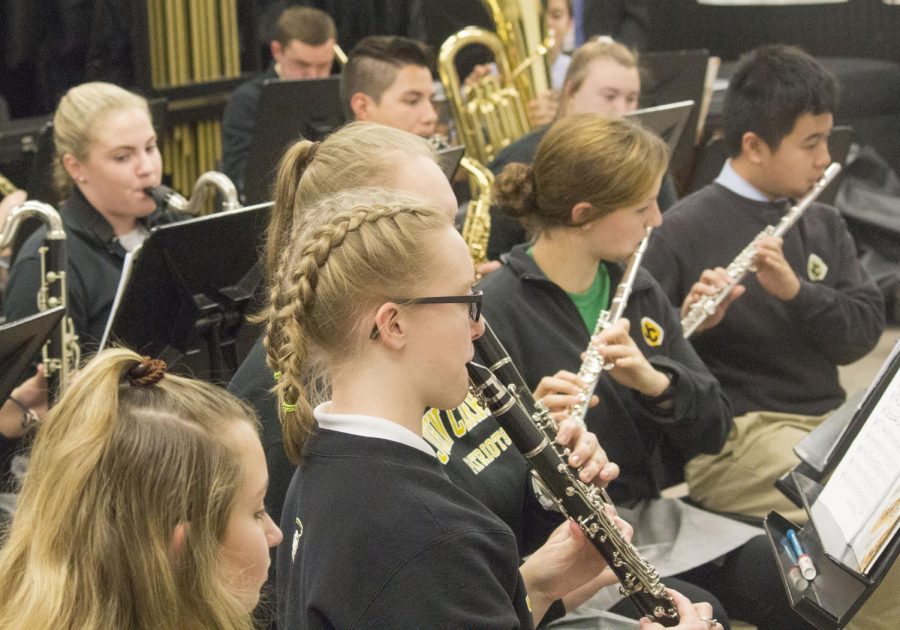 Members of the band practice a piece of music on Nov. 27. The band plays during football games and has a concert on Dec. 8.

Senior chorus member Caitlyn Trent counts the beat and waits for the cue to shout the word “lightning” during the song. She looks into the crowd, scanning faces to see if she knows anyone when suddenly, an unexpected shout arises from the choral group. Trent silently laughs at the mishap – they were not supposed to shout until the next beat.

“We practiced so many times. John [Kyburz] said ‘lightning’ at the wrong time, and that was really funny. Now, we make fun of him for it,” Trent said.

Because Trent’s time in chorus has been filled with memories like these, her final Christmas Concert comes with mixed emotions. “It’s my last Christmas Concert, so I’m bittersweet because I enjoy doing the concerts, but I’m also excited for what’s going to be in store for college since I want to stay involved in that kind of stuff,” she said.

This Christmas Concert on Friday, Dec. 8 will be the last one for seniors in band, chorus, Bella Voce, and orchestra. Both Director of Performing Arts Julie Parrish and Band Instructor Nicholas Franck have been working hard to ensure that the students will be able to showcase their talent.

“The biggest challenge is trying to find things that are suitable for the performers I have. For example, in orchestra I only have five violins and one viola, so I don’t have all the instruments you would find in a typical orchestra. So we’ve had to do a little bit of tweaking here and there to find things that work for the instrumentation I have, but are still challenging for them to play and to feel like they are getting something out of the performance,” Parrish said.

Similar to Parrish, Franck also has to learn all the music and make sure he knows what it’s supposed to sound like. “My job is to be as prepared as I can. To study the score, know all of the music, all of the parts. Know exactly how it should sound in order for my students to meet me there. In order to convey that idea to them, I have to know exactly what I am doing,” Franck said.

Although this is Franck’s first year as the Band Instructor, he does not feel the pressure to make a good first impression.

“Honestly, from where I stand, we are in a really good spot. So it should not be an issue of making a good change or good first impression with me as the director. I just want to put on a good performance for not only our friends and family, but anyone else that decides to come to our concert. It’s not a matter of me, it’s about us as a band,” Franck said.

In order to properly showcase their music, Franck and Parrish expect all performing students to come to rehearsals and classes prepared. Trent, who is in both chorus and Bella Voce, has to review the rehearsal tracks that Parrish sends out for Bella Voce on her own time. “Chorus doesn’t require too much work outside of class, but Bella Voce is requiring a lot of outside work. We have to go over the rehearsal tracks and everything. That one’s a little bit harder because there is no music,” Trent said.

According to Parrish, this has to do with the fact that chorus is a class in the schedule that meets the standard six out of eight days, while Bella Voce only meets twice a week.

For both groups, classes prove to be a valuable rehearsal time in order to prepare for the Christmas Concert.

“We work really hard on both our concert repertoire and getting the music all together, ready for the performance as well as our instrumental fundamentals [which is] how good we sound on the instruments. We do a number of exercises to build those skills all while moving forth with our repertoire,” Franck said.

According to Parrish, in chorus classes they rehearse every day. They begin with picking the repertoire and then work on perfecting the notes. After learning all the notes, it’s about “making it change from just notes on a page to making it music,” she said.

All of these rehearsals throughout the first semester culminate in the Christmas Concert on Friday, Dec. 8, beginning at 6:15 p.m. Both the students and their teachers hope to see students and their families come out and enjoy free entertainment to get in the Christmas spirit. According to Parrish, seeing people watching and enjoying the music that they have worked on for the whole semester is one of the best parts.

Like Parrish, both Hopkins and Carson hope others will enjoy their music at the concert. “The Music Department doesn’t get as much attention as the Athletics Department so if we do really well, it encourages more people to come and see the concerts,” Carson said.

Lauren Becker is the Media Chief for The Patriot and jcpatriot.com.