Haughton and Mathis step up despite injuries 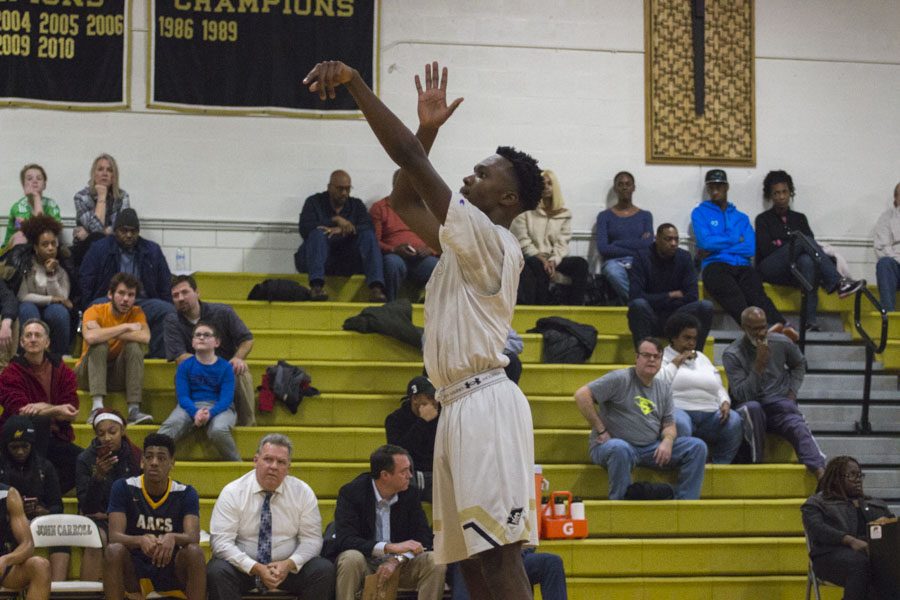 Senior Nigel Haughton shoots a free throw during a game against Annapolis Area Christian School. Haughton is one of the seniors that stepped up for the team after senior Immanuel Quickley got injured.

By the time senior Immanuel Quickley got into foul trouble against a strong Baltimore Polytechnic Institute team, the JC men’s varsity basketball team had already become accustomed to playing, and even winning, without him. As the time cut down to 5:16 left, senior Nigel Haughton stole the ball, and scored a layup. When a Poly player cut the lead by hitting a two-point shot, making the score 65-61, Haughton answered with a clutch three-point shot.

While Poly’s head coach may have expected an advantage and easy win when Quickley got into foul trouble, JC was ready to win with or without him. “At the beginning of the season he wasn’t there [because of illness], so we weren’t as stressed as people might have thought we were,” Haughton said. Haughton was ready to lead the team to victory, “I was looking to everybody like give me the ball and I’m gonna take us home,” he said. In the final minutes of the game, Quickley hit four free throws to finish his 20 point game, defeating Poly 75-67.

Poly wasn’t the only game the Patriots played without Quickley’s leadership. When Quickley was benched due to an injury, the team faced a strong Mount Saint Joseph team, which includes Maryland commit and 5-star recruit Jalen Smith. According to Haughton, the team was well aware of their expected loss. “Without Immanuel people were saying we were gonna lose. We showed everybody we were still a good team,” he said. The team ended up defeating MSJ by 21 points.

While losing a leader of your team can cause stress, it pushed players such as Haughton, senior Montez Mathis, and junior Yavuz Gultekin to step up for the team. “It definitely pushed me to be a better player,” Haughton said, “because we would just rely on Immanuel a lot, so him not being there forced other people to step up.” Mathis also took over and led the team to victory many times, with a 30 point performance against MSJ, 25 points over Calvert Hall, and 31 points over McDonogh.

With Quickley back, the team now works to balance between many players with strong play-making and scoring abilities. “It’s definitely a challenge to play with everybody…we’re still learning to balance between everybody in their roles,” Haughton said.

Though the team lost some of their final regular-season games, Quickley will return for playoffs from a knee injury that kept him from playing in their last few games of the season, including senior night. Haughton is not worried by their loses and is confident in their team’s abilities for playoffs. “We have a positive outlook on things,” he said. “Because we know, with every team, we can beat them.” In February, Haughton’s words rung true when the team did in fact end up beating every team, and winning the MIAA “A” conference championship.

Madison Dailey is a Community Editor for The Patriot and jcpatriot.com.