Seniors reflect upon heroes, victims, and survivors on trip and on Remembrance Day 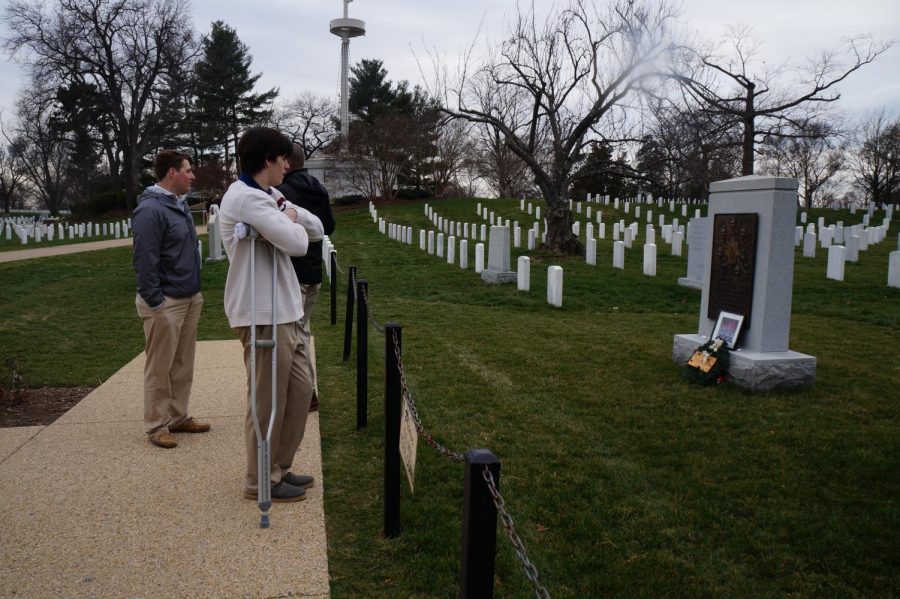 The members of the senior class went on a field trip to Washington, D.C. on Friday, March 6 as a part of their graduation requirement and as a tradition at JC.

Students have been studying the Holocaust in their English classes.  In preparation for the trip, seniors read Night by Elie Wiesel which details his own time in a concentration camp as a teenager.

The students started their day early with a visit to the Arlington National Cemetery to tour the grounds and to watch the Changing of the Guard at the Tomb of the Unknown Soldier. Along with the guard change at the tomb, the ceremony also included the laying of a wreath by a local D.C. school.

Many students elected to go into the area of the final resting place of President John F. Kennedy and his wife Jacqueline Kennedy Onassis. There they saw the eternal flame that burns near the gravesite.

“The most moving part about the trip was when I stepped into one of the cattle cars used in the Holocaust,” senior Evan Exter said. “It was so sad to imagine what all the victims went through in that car.”

For other students, the trip made everything more real.

“We know the history and we’ve learned about it before,” senior Emily Smith said. “But being there changes your entire perspective of things. You see the horrors of what people went through right in front of you.  It’s something I will truly never forget.”
Senior C.J. Polesovsky said, “The trip to the museum changed the way I view this subject.  It became much more real after seeing the artifacts from an atrocity so horrible.”

On Wednesday the 11th, the senior and junior classes, along with the Carroll Scholars participated in the Holocaust Remembrance Day held at JC.

While past Remembrance Days featured Holocaust survivors, the children of survivors, and other witnesses talking about the terrible events of the Holocaust and telling their stories to the students, this year was a bit different.  The guests were unable to attend due to the ongoing threat of the coronavirus.

The day was abbreviated with videos of past presentations, a performance by senior Mikey Shock, and a scene from Brenna Patzer’s senior project performance of The Diary of Anne Frank.

“My hope for Holocaust Remembrance Day is that everyone comes to realize every event in history did not happen the same way,” Holocaust Program Coordinator Mrs. Geczy said.

“The Holocaust is more than an historical event. It’s a life story and students need to realize that it’s not what happens to them but it is how they respond to what happenes to them,” Mrs. Geczy added.