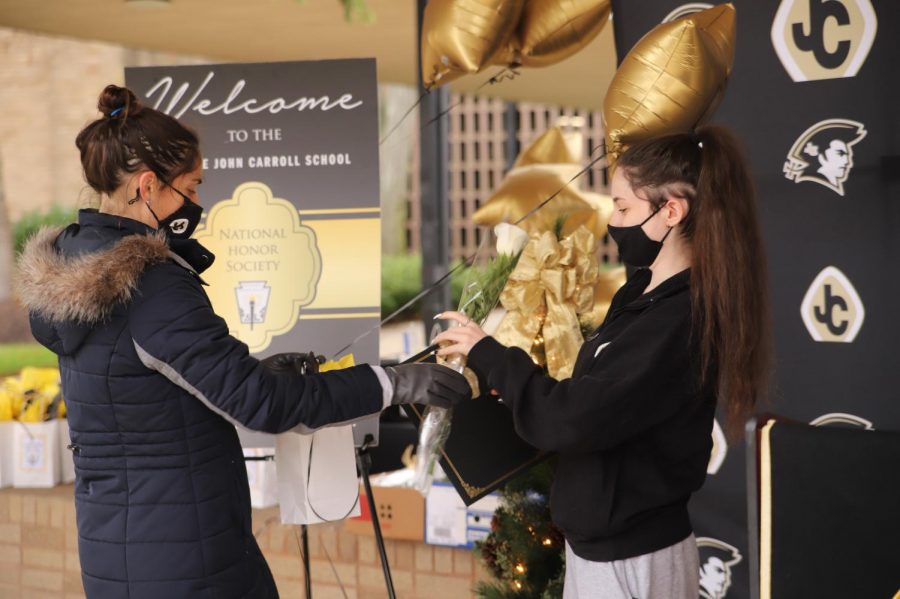 With pandemic numbers soaring in previous weeks, the co-moderators of the National Honor Society decided to host a virtual induction ceremony.

An online ceremony is not what NHS Moderators Mrs. Courtney Von Lange and Mrs. Hope Hemphill had hoped for, but they were still able to honor most of the traditions despite restrictions.
One tradition that wasn’t done this year was the “lighting of [the] candles, which is usually a traditional part of NHS,” said Co-Moderator Hope Hemphill. Mrs. Hemphill is English teacher in her third year of teaching at JC and her twenty-third year of teaching.
This year there were 78 new inductees for NHS, a number much larger than in past years. 12 senior inductees, 63 junior inductees, and three transfer student inductees are in the group. At least five of those inductees are children of faculty or staff.
The requirements this year to be eligible for induction have changed from years past. For example, the moderators waived the service requirement. Mrs. Hemphill said, “[We] were worried about students not being able to get out in the spring and summer.”
NHS Co-Moderator Courtney Von Lange, a math teacher in her ninth year of teaching at JC said, “We aren’t counting service by hours this year…We require one act of service per quarter.”
With the pandemic and restrictions staying longer than originally anticipated, students did not have the same service opportunities as years past.
Some requirements to be eligible for NHS have stayed the same such as having a cumulative GPA of 4.1 or higher for two years in a row. Students were asked to have two teacher recommendation letters.
Also, all of the candidates were reviewed by Dean of Students Sean Ireton, and he signed off on all members this year.
Along with an induction ceremony, there was an event on an asynchronous Friday that allowed all members to sign up for five-minute slots.
Students came to school and circled around the oval and stopped at the front of the school to sign the Book of Members in which every member of the National Honor Society has signed since 1968. This was a tradition that could still be practiced this year.
Mrs. Hemphill said, “They can pick up their certificate contactless and a “Swag bag. They get their own pen to sign the book, and they get to keep the pen.”
Additionally, students invited parents to join them in taking photos and celebrating the event together.
Students in NHS embody the four pillars that are expected out of the members. These pillars are Scholarship, Character, Leadership and Service.
Sydney Burns and Elizabeth Marlow of NHS have continued with a peer mentoring program this year as their Senior Project, first started by Kate Gromacki ‘20 as her Senior Project last year. Once inducted “[students] are eligible to participate in a tutoring program,” Mrs. Hemphill said. “NHS is a service program.”
NHS worked through obstacles to find a way to celebrate their new members through a virtual induction ceremony and in-person event that recognized their dedication and hard work.