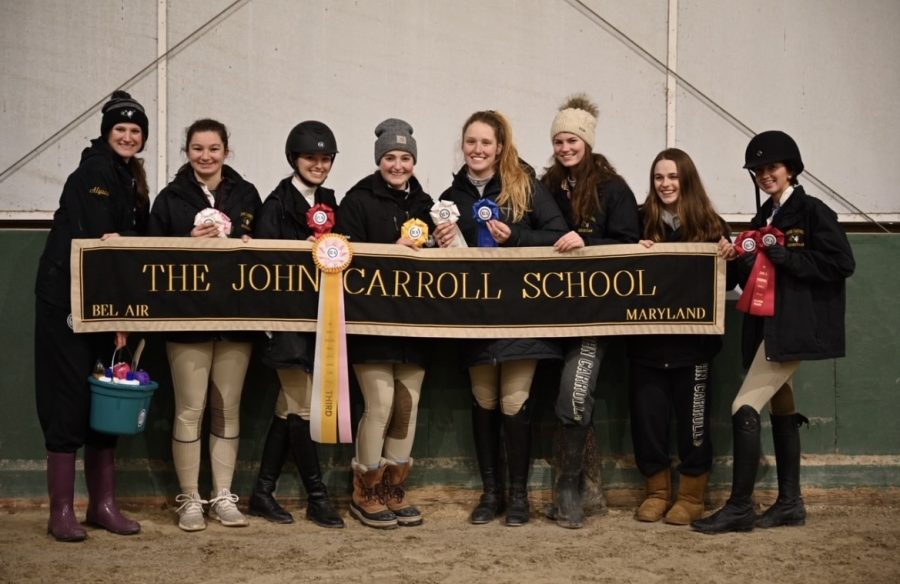 The JC Equestrian team ended their season in third, one point below the second-place title out of six other teams during the Interscholastic Equestrian Association (IEA) on February 20 at the Garrison Forest School.

At each show, the team rides with a “point rider” in each division. The point rider acts as the person representing their school in each division. An example would be first place being worth seven points, second place being worth five points, third place being with four points, and so on.
To qualify for Regionals a team must achieve 21 points while an individual must get at least 18 points.
This season, both JC as a team qualified for Regionals and a few riders qualified individually. Juniors Charlene Braddy, Madison Elliott, Margaret Tamberino, and Anne-Katrin Uryznicok qualified individually.
Before traveling to the show, the team spent lots of time preparing.
“Everyone was taking lessons to make sure we were riding our best even if we were not riding, pitched in during the week before to get both horses and the trailer ready,” Anne said.
From there, the entire team went out to show in order to support those who were riding.
Charlene was able to qualify herself for Zones which is the next advancement within IEA with a second-place ribbon in her class. “I’m really excited about Zones. I am anxious about competing, but happy to have a supportive team and great coaches by my side,” Charlene said.
To prepare for Zones, Charlene has been “practicing up to days a week and looking back on previous competitions to help be a stronger rider.”
Senior and team captain Kendall Ball offered some advice she would give towards the team. “Remember it’s supposed to be fun. One bad show is not the end of the world. Work on bettering yourself every time you enter the ring.”
Not every show will be perfect, nor will someone place every single time, but it is important to keep working towards each goal set in place.
By the end, the show was considered a success. “The points were very close at the end, and even though we did not make it to Zones, I could not be happier with this team and how our season ended,” Kendall said. The team worked together to take care of the horses and stay organized.
The best part of this show was said to be the team “supporting and helping each other.” The team spent at least 14 hours together that day arriving to their home barn of Claddagh Manor at 5:45 am to get the horses and not making it home until around 8:00 pm.
“Everyone has grown a lot this year, and I keep encouraging everyone to keep putting the work in this summer,” Kendall said.
In order to get ready for next season, the team will continue to train over the spring and summer months to “continue learning” to better face the upcoming season.