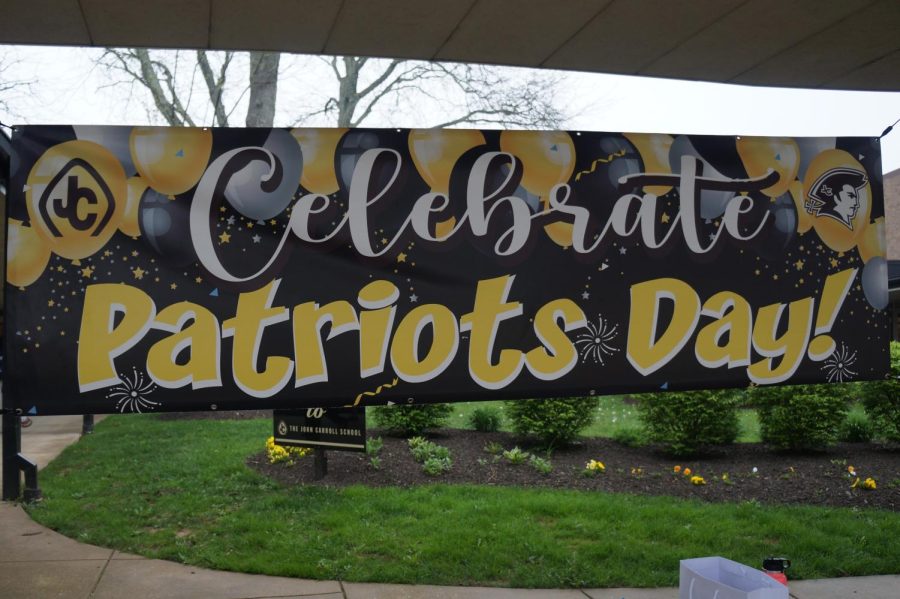 The week kicked off with a JC talent show featuring performances from Al Riska ’24, Paul Huynh ’22, Gianna Houck ’22, Jillian Connolly ’22, Brooke Hoskins ’24, Maya Millsape ’24, Connie Fritz ’24, Gabby Spencer ’22, The JC Rock Band, math teacher Kimberly Cadle, religion teacher Mike Kimble, and a faculty/staff flash mob.
Tuesday was Patriots Day when a total of $71,038 in donations came in from 426 donors, making it a record-breaking Patriots Day.
To begin the day, students were given a special welcome as they arrived on campus and received their Patriot Grams in advisory. They were also able to play cornhole and spike ball in the courtyard.
On Wednesday, the JC community took part in a special wellness day which featured yoga, Creative Coping, Boot Camp, a Food and Nutrition Seminar, and Zumba classes. After school on Wednesday, students were encouraged to participate in a two-mile wellness walk around the school campus.
Thursday featured a Throwback Thursday, where students in advisory participated in a Kahoot that centered around a “Who’s Who: Baby Edition” at JC. Students were challenged to guess the faculty member based on a baby picture of that person.
Friday wrapped up the very successful Patriots Week and featured a Patriots Week Mass and alumni award ceremony. At the end of the day, students were invited to Miller Way for a complimentary Kona Ice.
During the week, faculty and students were encouraged to participate in a service project, which incorporated writing cards to the Sisters of Saint Joseph, wishing them a happy Patriots Week.
Freshman Kathryn Murray said that her favorite part of Patriots Week was the talent show because “it was very fun to watch. I like how people had the confidence to go up and share their talents, and the fact that they convinced the teachers to dance at the end was impressive.”
Junior Sam Dlugokenski said that her favorite part of Patriots Week was also the talent show because “it was cool to see the talent that our fellow Patriots had that I don’t know about.”
Director of the Fund for JC Alyson Shiflett worked with the Philanthropy Club to put together events for Patriots Week. She said, “I hope it will bring a sense of fun, community, and tradition. Patriots Week will be what students look forward to now and ten years from now.”
Mrs. Shiflett added, “Patriots Day still stands as our Day of Giving to the Fund for John Carroll. The week itself serves as a Spring Spirit Week full of fun activities and events for the whole school to participate in and to celebrate what it means to be a Patriot.”
Patriots Week also allows for “our 10,000+ alumni to be engaged and connect back with John Carroll during the week, as well,” Mrs. Shiflett said.