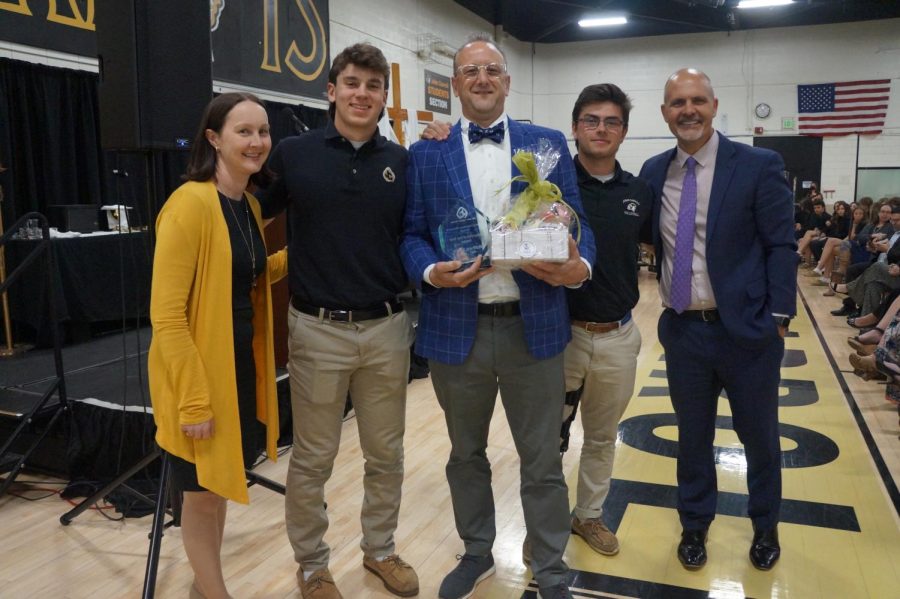 This year’s 2022 Educator of the Year award recipient was announced at the End-of-Year Mass Celebration during Patriots Week on April 29.

The winner of this year’s award is the current English Department Chairman, Matthew Blair.
Mr. Blair has worked at John Carroll for 23 years and has fulfilled roles as a club moderator, a lacrosse and volleyball coach, an executive faculty member, and the first-ever host of JC’s Got Talent.
Through his time at JC, he has watched the evolution of technology in the classroom and has experienced JC becoming more diverse. He has also been a continuous advocate for students, which he addressed in his acceptance speech.
He began his speech by thanking the students for voting for him. He continued by thanking his family, specifically his mother, grandmother, and wife.
He commented, “When [SGA Co-Moderator] Mrs. Hall first told me that I had won the award, I was taken aback, but at the same time, I was proud and excited that so many students had voted for me.”
“This award means a lot because there are so many great coaches and teachers at John Carroll. It feels good to be singled out in the larger community,” he added.
In his early life, he himself did not love school, but the support and motivation led him to find a career in which he felt he belonged the best. In a family of five lawyers, stepping out of the family norm required that support. Now it is his wife who also has helped and continues to help, pushing him to “want to become a better person.”
Mr. Blair also highlighted his fellow colleagues as he said, “JC is filled with great teachers and coaches.”
Some of the staff members he mentioned included Mr. Larry Dukes, Mrs. Teresa Gauthier, Mrs. Christine Zurkowski, Mrs. Danica Attanasio, Mr. Jake Hollin, and Mr. Gary Scholl.
His favorite part of being a teacher is “seeing former students and what they’re doing.” Mr. Blair mentioned some of these students, specifically Immanuel Quickley and Meghan Ferrell.
In his speech, Mr. Blair referenced a quote by Bob Dylan: “I remember every face of everyone who got me here,” and continued to reference his gratitude for the community by adding, “No one gets to where they want to go by themselves.”
Mr. Blair wrapped up his speech by giving some insight about his teaching during the pandemic shutdown. He explained that he recorded videos for his sophomores and joked about having to re-record every time his dog started barking. He also noted how those then-sophomores are now the 2022 senior class.
This award is presented to an educator who has been employed at JC for at least three years. The award is sponsored by the Student Government Association and is voted upon by the student body.