The Patriot In-Depth: Through the Years

In celebration of the 50th anniversary of JC, The Patriot asks faculty, alumni, and students how the school has evolved in its journey through the decades 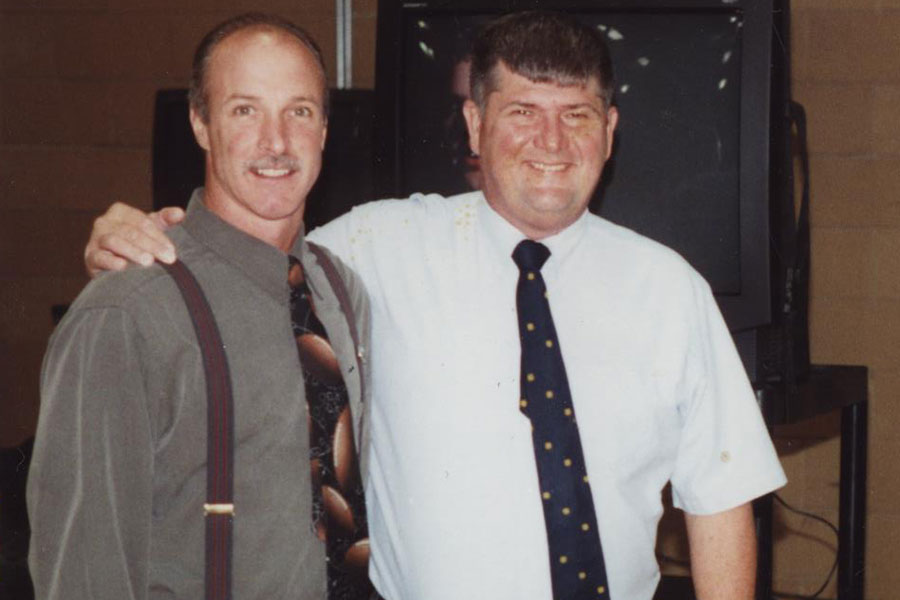 Today technology defines JC. It is used in every class, in different ways. A teacher on The Patriot survey on April 28 said, “students are learning useful real-world skills [with the technology].”

The one-to-one laptop program was first introduced in 2006. The students leased Gateway personal tablets from the school.

Science Department Chair Julie Baker, who taught for 11 years at JC, remembers when the laptops were first used, “they really made an impact on what you can do in the classroom,” Baker said.

Math teacher of 37 years and class of ‘70 Al Ward remembers when the only technology in the classroom was “the overhead and filmstrip projectors. Around 1990, we started using graphing calculators.”

Then in the fall of 2009, JC switched to using Lenovo tablets that allow students to handwrite their notes digitally.

A teacher who answered the survey said that technology has, “improved the speed of communication, reduced paper use, but has also increased social media bullying.” Math teacher of 43 years George Appleby believes the laptops can be both helpful and problematic. “There are pluses and minuses for the use of technology,” he said.

Another teacher said on the survey that students now have “the world at their fingertips,” when asked about changes in technology.

Although the mission and heart of JC has not changed, its identity has.

“[The dorms have] created a more racially and ethnically diverse student population,” an alumna said in the survey.

Dean of Students Brian Powell who has been teaching at JC for 11 years said, “We no longer view ourselves as Harford County’s Catholic high school. We still have a strong Catholic identity, but we attract students from outside the county.”

Also, a teacher response to the survey mentioned a change in the school motto. In 2009, the old motto, “Tradition, Pride, Excellence” was replaced with “Considerate, Compelling, Uncompromising.”

A teacher answer to the survey said that, “the identity of the school has not changed, only the way we go about fulfilling the Mission Statement has changed.” Ward agrees saying that, “mission is still a primary word.”

“A strong sense of belonging,” was how one alumnus described JC.

The dress code and uniform requirements have changed throughout the five decades.

“Back in the beginning it was the brown skirt and white shirt in the spring and fall. In the winter it was the herringbone skirt and brown shirt for the girls,” Ward remembers.

Jessica Limmer, class of ‘00 and science teacher, wore “a navy blue and forest green kilt with tucked in polos” during her time as a student. “We had to wear nylons, now it’s more relaxed. But the guys could wear more colorful shirts than now. I had friends who would wear bright pink and purple shirts.”

“It is [currently] a lot more relaxed. It was more strict when I was here,” English teacher and class of ‘00 Alison Amato said.

Ward said, “the guys had to wear sports coats all the time, Mr. Barker introduced the polo shirts in the early 2000s.”

Most recently the uniforms have changed to allow JC sweatshirts to be worn in class.

One of the alumna answering the survey said, “I miss the herringbone skirts. Bring back the old uniform!”

Limmer noticed how many more classes are offered today. “I wish we had so many different sciences like Robotics or Anatomy and Physiology. I wish we had the ability to take as many electives as students can today.” A teacher in the survey noted the “honors and AP expansion.”

Amato said the major change in classes was that “[students] didn’t use computer labs and technology classes weren’t here.”

The Science, Technology, Engineering, and Math Academy was started in Sept. 2012. The program gives students a chance to go on STEM-centered field trips and listen to speakers. When the students graduate, they earn a distinction on their diploma.

Teachers come and go, and there are no longer any nuns teaching at JC after last school year. Ward says, “absent are the Sisters of St. Joseph.”

A response to The Patriot survey said that classes have been affected because, “the qualifications of the faculty and staff hires has increased.”

Most recently, Cyber Days have been implemented in place of snow days.

According to art teacher and class of ‘70 Michael Gaudreau, “this is not possible for other schools, because not all of their students have computers. Cyber Days make sure we don’t lose time.”

One answer to the survey said, “I’m impressed with the academic growth, with the STEM program, extensive fine arts programs, variety of classes at many academic levels. I’m an alum and a parent, and my children liked choices of classes and felt very prepared for college.”

What many know as the Academic Wing was a part of the original building, along with the Main Office, Upper Gym, Cafeteria, Auditorium, and Library.
In the seventies, there was even a smoking lounge for students until smoking on campus was banned in 1975.

Powell cited “the Brown Room, weight room, and Lower Gym,” as being added onto the original building.

Amato said that “When I was here, they didn’t have the Fine Arts Wing. The other art rooms were in the first floor hallway.”

Additionally, “There was no Lower Gym or lights on the field,” Amato said. History teacher of 19 years Rodney Johnson said, “the other addition was on the end of the Academic Wing where the language classrooms are.”

The most recent building addition was the Fine Arts Wing in 1999.

“The adding of the new Fine Arts Wing was a very big step to making the Fine Arts a primary interest,” art teacher Michael Gaudreau said.

Other renovations include St. Joseph’s Hall becoming international student dorms for this school year. Also, some of the space was dedicated to the Academy of the Performing Arts, “The convent being a dance studio–how cool is that?” Gaudreau said.

Now JC is looking to make many changes in the future with the Master Plan. The Plan will include turf fields and air conditioning in the auditorium and cafeteria.

Madison Meyer is an In-Depth editor for The Patriot and jcpatriot.com.