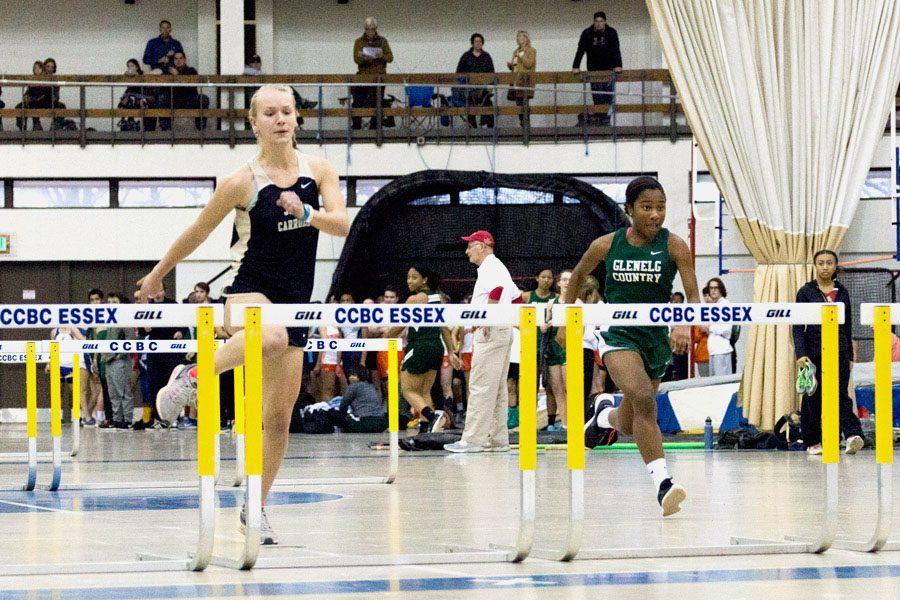 Junior hurdler Ashlee Kothenbeutel approaches the final hurdle to her 50 meter hurdle dash in an IAAM Meet at CCBC on Jan. 13. The women's indoor track and field team finished fourth out of 15 teams in the IAAM A Conference Championships and set several school records.

The women’s track and field team had a successful season this year, placing fourth out of 17 teams in the IAAM/MIAA Track and Field Championships on Jan. 27. The team broke several school records and became an IAAM All-Conference team in the 400 meter relay.

The team was able to find success due to several key runners, especially junior sprinter Chika Chuku who beat several personal records as well as helping the team break several school records. She set three new school records in the 300 meter dash, 200 meter relay, and the 400 meter relay at this year’s championships. “I think I did well, I PR’d [beat personal records] throughout the season with my times, but also was able to set school records during championships,” said Chuku.

In addition, Chuku noted that her fellow teammates also improved to help contribute to their record-setting runs. “[At championships], everyone improved, and it was like we were all one big happy family,” Chuku said.

Junior distance runner Hadley Leishman enjoyed her second year on track and liked beating her times during meets. “Keeping good endurance was hard, but I like distance better than sprinting because it keeps me in shape, but overall I think we did really well as a team,” Leishman said.

Indoor track and field coach Robert Torres thought that the women’s team did well overall and performed well this season. “[At championships] we had a good performance and the team did not disappoint,” Torres said.