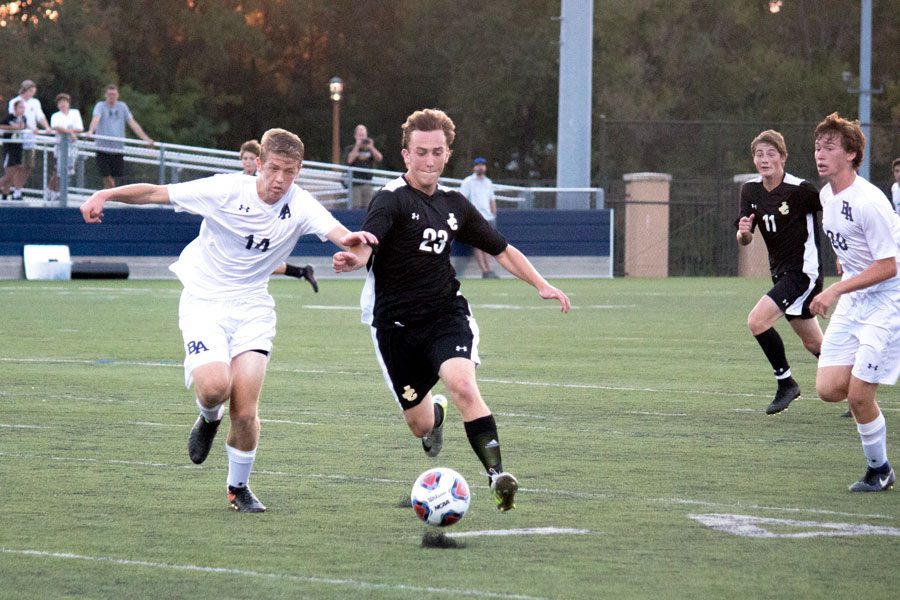 Senior striker Auggie Van Dalsam defends the ball from an opponent during a game against Bel Air on Sept. 16. JC lost 0-3.

The men’s varsity soccer team finished their season with a 5-11 record in the MIAA “A” Conference. JV’s conference record was 3-10-3.

The varsity team had a tough 2-1 double-overtime loss to Calvert Hall on Wednesday, Sept. 13, but rebounded on Friday, Oct. 6 with a 2-1 overtime win versus Calvert Hall. “We did everything together, win or lose. We never gave up even though we had some tough games like Curley,” senior left guard Luke Strappelli said.

Varsity men’s soccer head coach James Fendryk felt it was a successful season, despite some difficulties. “We were fairly good at working the ball and keeping possession. We did struggle through the middle of the season due to some injuries and suspensions, and we conceded too many goals. We ended up missing playoffs by one point,” Fendryk said.

Strappelli believed that senior center midfielder Jake Krieger was influential to the team’s perseverance. “Krieger is a great dribbler and created a lot of opportunities,” Strappelli said.

Fendryk agrees that Krieger helped to lead the team this year. “Krieger was the season MVP. He was involved in almost every goal we scored. He scored 19 goals [this season],” Fendryk said.

Fendryk is already looking forward to next season. “I expect [next year] to go fairly well. We had a young team and are only losing six seniors. We had four sophomore starters and getting more experience will help out,” Fendryk said.

Matthew Foulk is a Sports Editor for The Patriot and jcpatriot.com.