Senior cheerleader reflects on the past, looks toward future 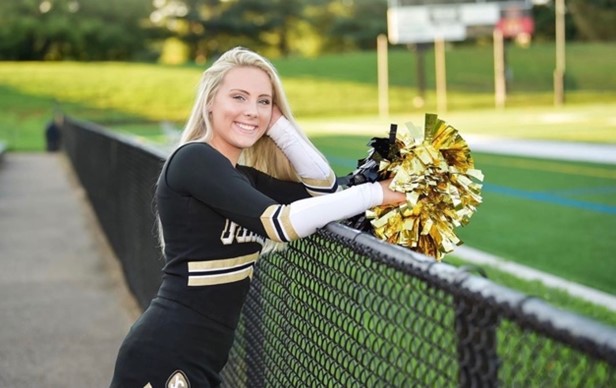 Senior Shelby Clayton is a four-year varsity cheerleader and a four-year badminton player with great success in her sports. Combining both all-star and high school cheer, she has been involved in the sport for a total of 14 years. She is gearing up for both her last fall season as a JC cheerleader and her senior season of badminton.

Not deterred from the physical and mental challenges of cheerleading, Shelby has had continued success within the sport. During her all-star career, her team qualified and receive a bid to Summit. Summit is a “Worlds” type cheerleading championship for Levels 1-4 who are in non-world competing divisions.
A bid in cheerleading is an invitation to compete at a competition and must be won through another competition. For team reasons, the team was unable to go to the competition and had to defer the bid to the Summit competition.
Shelby and her team at Maryland Twisters earned this bid in her last season of All-Star, in 2016. Not deterred from not being able to go to Summit, she continued her cheer career at JC where she has been on varsity for all her four high school years.
Regarding the greatest coach Shelby has ever had, she had a praising response.
“The greatest coach I ever had was Coach Mike at Maryland Twisters, and he coached me for eight years…he really cared about you individually, inside and outside of cheer. He was there next to you backing you up; he pushed you to your limits because he knew what you were capable of.”
Shelby’s greatest role model is her mother, her “greatest fan and biggest supporter,” who is always there to back her up with a “big smile on her face.” Shelby’s mom Erin is her biggest inspiration for her to do well and always push to be better.
One of the hardest challenges Shelby faced was when she broke her fifth vertebrae in her back when she was 10 years old. That setback, however, did not deter her from continuing cheerleading.
Continuing with cheer despite her injury she went on to say, “The sport is very hard on your mental health.”
Shelby believes that mental blocks are harder to get through than having a physical block. She said, “Your mind is your biggest enemy.”
To get through these challenges, Shelby goes to either her coach or her mom for advice, and they would tell her that she is better. Shelby goes on to tell herself that “I’m better than what I put myself out to be.”
She also goes as far as to say she looks, “at myself in third person…to overcome my obstacles and challenges.”
Shelby said that the cheer program at John Carroll hasn’t been taken very seriously in years past. Shelby responds to that with “It was never the cheerleaders’ fault; they were always so eager to be better;” however, the problem was “a lack of coaching, but the cheerleaders work so hard.”
She went on to say that it is “very disappointing; it makes the cheerleaders feel not wanted.”
Last year with a different coach, the cheer program was starting to look better again. With the new coach from last year moving away and a new coach taking her place for this season, Shelby is ready to go for her senior cheer season this year.
Shelby is hoping to go to college, for academics. She would love to attend Duke, but given the opportunity, her dream school would be able to cheer at the University of Maryland College Park.