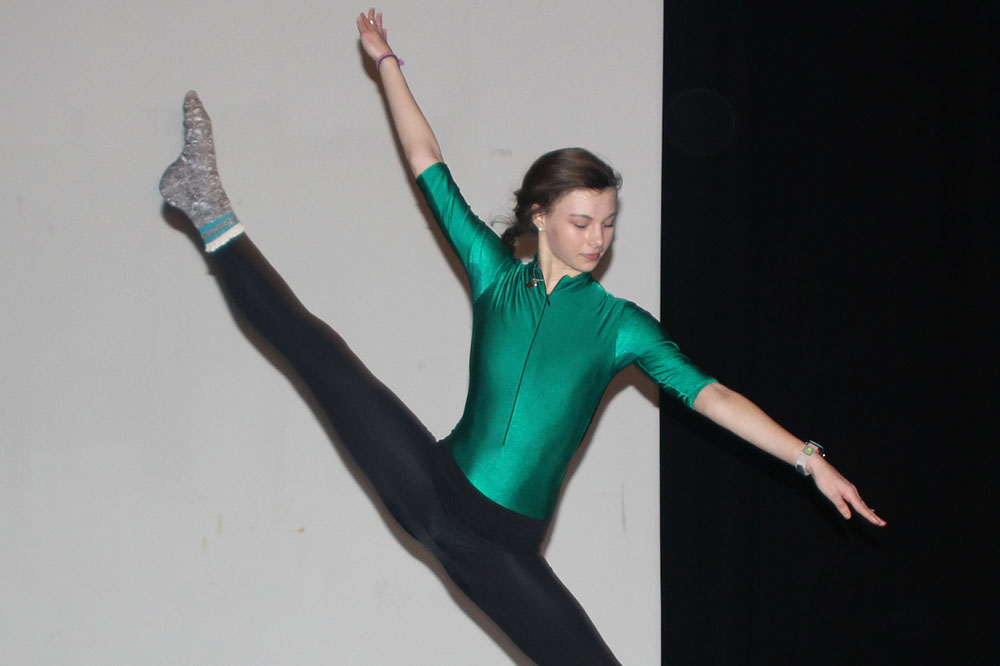 Student dancers share their experiences and why dancing is important to them. Senior Morgan Johnson, freshmen Caitlin Kerrigan and Alexander Kirkland give their stories about how dance impacted their lives.

With butterflies in his stomach, freshman Alexander Kirkland stands with his team preparing to glide out onto the ice to begin their routine. The ice glistens before him and Kirkland has mixed feelings of apprehension and anticipation. His team sails in complete synchronization and strikes their beginning poses.

Kirkland started ice-skating in 2008 when he was seven- years- old. “My mom was an ice skater so I tried it out and liked it,” Kirkland said. Since then, Kirkland has spent countless hours on the ice refining his skills.

Kirkland competes for the Chesapeake Sailors synchronized skating team with 12 other skaters. His team recently performed in the eastern sectional competition in Richmond, Virginia, placing in third and earning a spot in the national competition. The theme of their performance is iconic songs from NBC’s hit show “Saturday Night Live.”

Synchronized skating, or “synchro”, is a form of competitive, team figure skating. According to the US Figure Skating website, each team consists of between 8-20 ice skaters who perform a program consisting of various formations and step sequences.

Kirkland enjoys synchronized skating the most, because “you’re with a team of people and you have to do moves you wouldn’t normally do skating by yourself,” Kirkland said. Skating gives him an opportunity to feel free and a sense of joy. “The best part of skating is the ability to go so fast on a certain surface, and it’s just fun,” Kirkland said.

Since nationals are coming up, Kirkland and his team will have an all-day practice in preparation for nationals at their skating rink in Reisterstown.

Nationals are on Feb. 23, and take place Kalamazoo, Michigan. This is the first time that they are going to nationals since 2013, where they placed 12, and they hope to impress the judges with their imaginative routine. Kirkland spends roughly two hours a week on the ice working with his team to prepare for nationals.

Elizabeth Harmison is a Media Editor for the Patriot and jcpatriot.com.

10 a.m. on a Saturday morning, mentally drained, senior Morgan Johnson bawls her eyes out in the midst of embarrassment. Standing in front of three fellow dancers, her dance instructor forces Johnson to Fouetté turn for the first time. Fearful of judgement, Johnson wishes she never danced competitively.
“It was when I realized dancing [competitively] became an issue for my [mental] health,” Johnson said. Two years later, she quit dancing competitively due to the stress.
Johnson first learned to dance when she was two years old. Initially watching older dancers, she found a passion in the ballet, modern, and jazz styles. For 13 years, Johnson dedicated her life to dance and, eventually, competitive dancing.
“I stopped because the studio I practiced at closed down and I needed to focus on school,” Johnson said. “It was just stressful and caused anxiety.”
However, not everything about competitive dance was bad to Johnson. “I miss being in the dance world and all the costumes and make up,” she said.
Through experiences, dancing has made a major impact on Johnson’s life. Dance taught her how to be tough and deal with stress.
Even though she quit dancing, Johnson still enjoys dancing in her room. According to Johnson, competitive dancing and having people judge her was too much for her mentally, and she couldn’t handle the anxiety.
“I love to dance, I just didn’t like being judged by other people,” Johnson said. “I don’t think dancing was for me because I don’t like other people watching me.”
Johnson loves to dance because of the chance she has to express herself. According to Johnson, dancing is a fun way to lose weight, feel yourself, and feel your freedom.
Though Johnson doesn’t plan on dancing competitively, she will continue to do freestyle. She expresses herself through random moves to songs in her bedroom on random days of the week for fun.
“It [dancing] feels very nice now, I feel better,” Johnson said. “Dancing for fun gives me a chance to express myself in a way that’s not verbal, I love it.”

Kishan Patel is the Online Chief for The Patriot and jcpatriot.com.

Freshman dances to discover herself

Freshman Caitlin Kerrigan has learned a lot from dance and uses the art form as a way to discover herself and to explore her feelings. She says that dance turned her into the person she is today. “I think it defines people who struggle. It escapes a lot of feelings, and gets your mind off things,” she said.
Kerrigan is in the most advanced level at her dance studio, The Rage Box Contemporary Dance Center, in Forest Hill.She has practice on Mondays, Wednesdays, and Thursdays which adds up to about 18 hours a week.
She started dancing as a child. “I wasn’t good at any other sport, so dance was something that I was leaning towards,” Kerrigan said.
“Usually we walk in and warm up, then we do some stuff across the floor and work on technique, maybe we will do a combination, and then we work on our dance,” she said.
Her favorite style of dance is lyrical. “Lyrical is toned down, and more intense. There’s more of a feeling or a scene behind it, and there’s more of a purpose,” Kerrigan said. She will be performing in a lyrical piece titled “Wolves” as well as other dances at every performance that her dance company performs in.
Through dance, Kerrigan has bonded with people who enjoy expressing themselves in similar ways. “I’ve formed lots of friendships, and it was just a good experience because you learn from others too,” Kerrigan said.
Her favorite memories have been on stage. “It feels good sharing your talent with everyone, and just being up there. And I enjoy it, it’s a positive experience,” Kerrigan said. “Just performing and being on stage at competition [is positive]. I enjoy being with everyone and the experience.”
Kerrigan’s journey has been a journey of self-discovery and self-love. “It’s definitely made me find myself and be happier. When you’re sad you can just dance it out, and it all works,” Kerrigan said.
“It’s a different way of letting things go. It changes your perspective, and you find out a lot about yourself in dance,” Kerrigan said.

Adriana Guidi and Nick Miller are Entertainment Editors for The Patriot and jcpatriot.com.