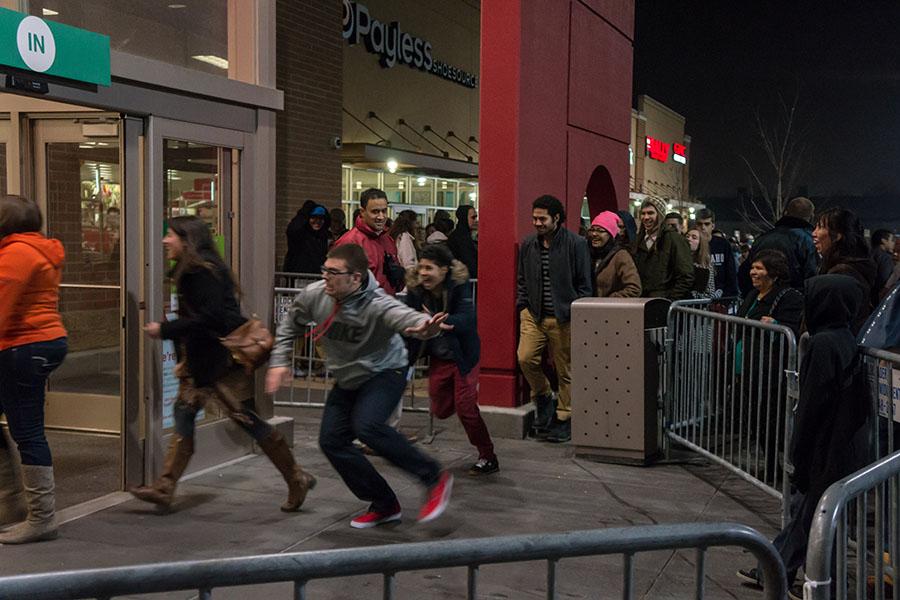 Crowds of eager shoppers storm Target on Black Friday as the doors open. This day has become a phenomena around the world, and kicks off the holiday shopping season. (Photo courtesy Powhusku)

Crowds of eager shoppers storm Target on Black Friday as the doors open. This day has become a phenomena around the world, and kicks off the holiday shopping season.

‘Tis the season … for Christmas shopping.

Waking up before the sun, dragging your family to store after store, pushing through the throngs of people, all to get those deals. But the deals are special deals. They are superb, unimaginable, and magical deals. Is the stress worth it?

Some say yes. And some say no.

“I like all the deals you can get for certain items and the rush you get when you see all the people standing in line,” sophomore Eryn Roach said.

Senior Brendan Wille disagrees. “It is too crazy and I don’t like to get up early. It’s not worth it.”

When and how did this insanity actually begin?

Since 1924, the Macy’s Thanksgiving Parade traditionally kicks off the start of the Christmas season, with red and green splayed all over.

But as everyone knows, the name of the game is “black.” Since the 1960s, Black Friday has also indicated this jolly time of year.

Before accounting records were computerized, red ink meant a loss in money and black ink meant a profit. The day after Thanksgiving began the black ink. Stores were rolling in the dough.

It is also said that police were upset by the amount of people on the streets, and called it “black” because of the surplus of vehicles emitting exhaust.

With all these ideas swirling around, people can choose to believe whichever account they want, because all that matters to any hardcore shopper is that Black Friday officially falls on Nov. 28 this year.

However, over the past few years, Black Friday has been starting earlier and earlier each year. This year, 2014, will be the earliest yet, with Black Friday beginning on … Thursday.

Some stores are drastically changing the rules and are starting the whirlwind of shopping at 6:00 p.m. on Thanksgiving evening.

Whether you like it or hate it, this is the day for some serious Christmas shopping. With Christmas in the air, there is always much to see and to do.

“I like [going to] Starbucks with my friends and walking around because we don’t have any money. I just like looking at everything,” sophomore Elizabeth Harmison said.

If you venture outdoors, make sure to be ready for a day filled with a rush of doorbusters and outrageous sales, all enticing shoppers to buy, buy, buy.

As the crowd storms through the doors at the exact moment the clock strikes midnight after a day of being thankful, it seems the greed and wants of the populace has completely taken over. With the mobs of people crowding the shopping malls and local stores Thursday and Friday nights and the millions who participate in finding deals all day Monday, its easy to forget about the ‘thanks’ in Thanksgiving.

In the midst of all this gratitude and indulgence, where is all the giving?

Many charities, families, students, and clubs across the globe came together on Dec. 2 with one thing in mind: giving back. From dance studios in Buffalo, New York making a difference in girls’ lives to Girl Scout Troops collecting books to build libraries for African schools, this day takes many shapes and forms.

#GivingTuesday is a worldwide day that focusing on organizations and individuals who give back in the community. This event takes place the Tuesday following Thanksgiving, and, according to givingtuesday.org, was founded in 2012 by New York’s 92nd Street Y  in a partnership with the United Nations Foundation. With the help of many founding partners, a global movement was launched that has now engaged over 10,000 organizations.

On givingtuesday.org, anyone interested can read stories of people worldwide practicing generosity and making a difference. They can also find many events and organizations to donate to if they wish to participate in this day.

So next year, after you spend all your money on Christmas presents and mesmerizing online deals, think about the true meaning of Thanksgiving. Maybe next year, rather than buying, giving will be given an even greater emphasis.

Morgan Taylor is a Copy Editor and Claire Grunewald is a Lifestyles Editor for The Patriot and jcpatriot.com