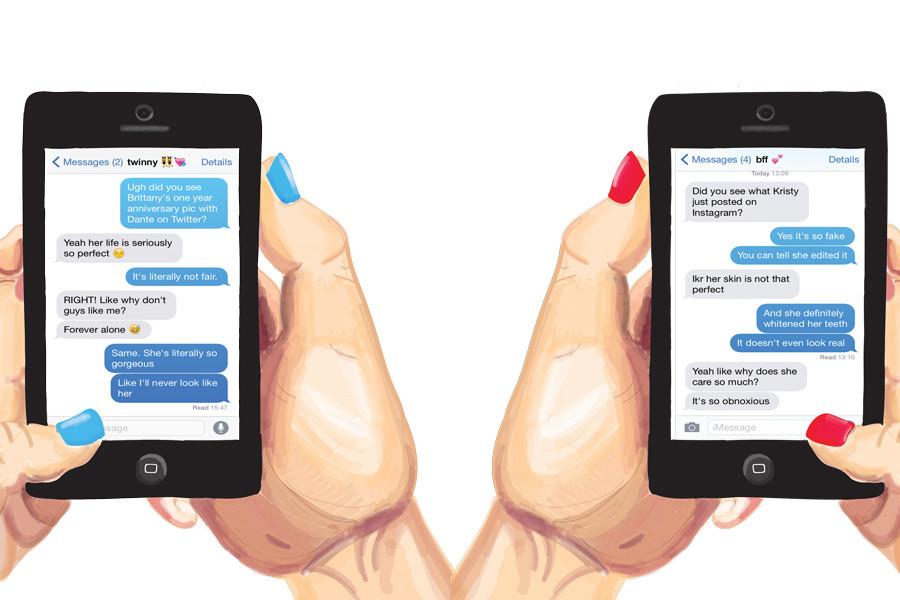 From likes on Instagram pictures to retweets on Twitter, social media has risen in fame and captured the attention of billions all over the world. It’s a beneficial way to share moments and memories with family and friends around the globe.

“Since I move a lot, I’m able to keep in contact with so many people really easily,” senior transfer Lauren Karbler said. The question is: are these moments representative of the life they actually live? 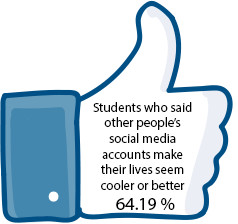 Social media sites and apps allow students to choose an impressive visual and comprehensive filter for their lives, making the boring exceptional and th
e unappealing alluring. They give themselves an image of the person they want to be: someone who is fun, creative,

witty, spontaneous, beautiful, and intriguing. But, is this for the best?

“I think it affects people negatively because people always are looking for likes and try too hard to feel accepted,” junior Sydney Shupe said.

In a survey conducted by The Patriot, 65.99 percent of respondents said that their social media accounts reflect what their life is actually like. Interestingly enough, when asked how they feel  other people’s social media accounts reflect what they are actually like, 64.19 percent of people said that it makes others’ lives seem cooler and better than they actually are.

This virtual renovation can be accomplished in millions of minuscule ways. You can compose a funny twee 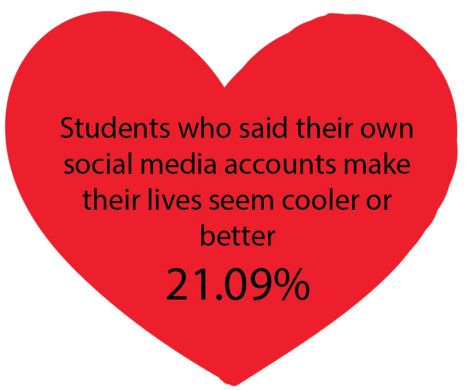 t pondering on it for an hour before posting it to seem witty. You can edit smiles to erase the stains from the cups of coffee you drank to get through the day. You can post pictures hugging dozens of friends when in reality, you’re not even close to them.

“If you go somewhere with a friend, all you do the whole time is try to get a good picture so you can post it and make other people jealous of what you’re doing, when really you’re wasting a moment with them by taking pictures the whole time,” senior Kelley Reilley said.

Many student’s responses proved Reilley’s point true because it seems that they are tuned into social media constantly, no matter what they are doing. “I’m on it literally all the time like 24/7. If I’m not sleeping or dead, then I’m on [social media],” junior Olivia Lang said.

“I don’t like social media because people spend too much time trying to capture moments instead of living in them and embracing their surroundings,” Reilley said. Popular opinion online seems to concur with how students view social media as well.

“The 27 flawless ‘night out’ pictures are more important than the night itself. If a girl purchases a new dress, it’s more likely for a new Facebook profile photo than an actually party,” Miranda Athanasiou said in her article on Elite Daily. If we are too busy spending all of our time creating this virtual

mask for ourselves, we miss out on the opportunity to have real life experiences embracing our surroundings and having face-to-face interactions.

According to the Huffington Post, “We’re living in a world where hours spent on Facebook in the U.S. went up 700 percent between 2008 and 2009. Where 30 percent of people in the U.S. used social media in 2008, and 72 percent do today.” The mask that hides the true identity of people is becoming more of the norm as time goes on.