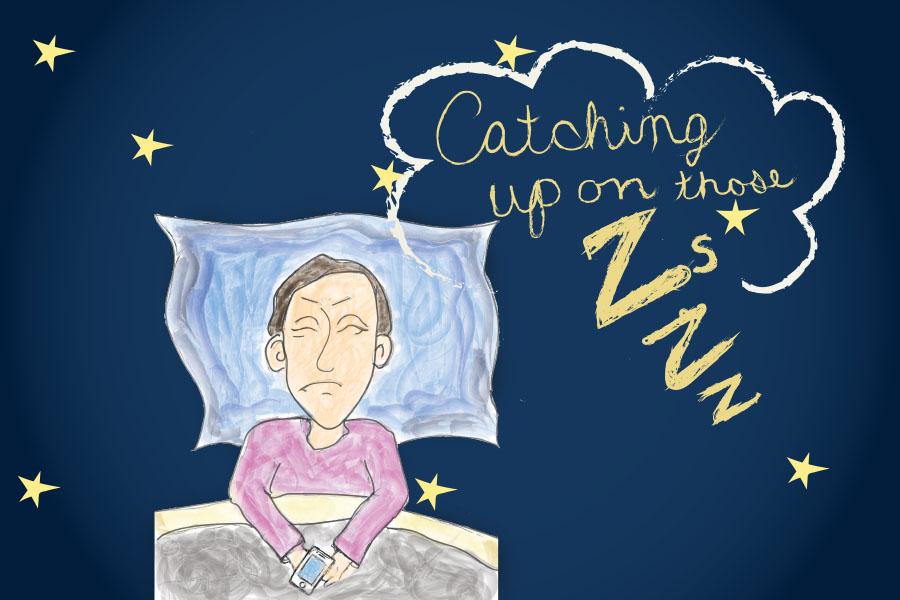 Catching up on those Zs

A pounding headache throbs painfully as freshman Alexis Loder tries to concentrate on her school work. It’s toward the end of the day, and her biology teacher’s lecture buzzes in the background as her concentration falters. The headache, she says, is a normal consequence of sleep deprivation. Many students, like Loder, find themselves tired or debilitated throughout the day because they lose sleep due to a combination of technological distractions, homework, and extracurricular activities.

Social Studies teacher and clinical psychologist Dr. Paul Lazor believes that most students do not get enough sleep and that technology could play a large part in this deficiency.

According to Lazor, the brain goes through distinct cycles of sleep and wakefulness. In the morning, the body produces adrenaline and other hormones that effectively give a person the energy to stay awake. As it gets closer to nighttime, a different part of the brain will increase melatonin levels in order to induce sleep.

However, the rapidly expanding availability of mobile devices has also increased the amount of blue light that students are exposed to from their phones, televisions, laptops, and other devices. “If you spend a lot of time looking at a screen before you go to sleep, it actually interferes with your sleep,” Lazor said. “The blue light activates your suprachiasmatic nuclei, which is what gets you into your circadian rhythms. In other words, it gets you awake, so I think technology has to do with sleeping less.”

In order to combat this growing problem, technology companies like Apple have developed features for their phones that reduce the blue light by changing  the the colors of your phone to warmer hues in a mode called Night Shift. 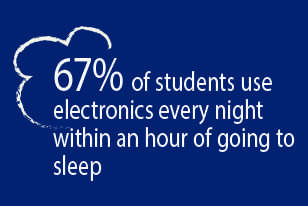 Many students use this feature, such as sophomore Jack Stannard. “I think it’s easier, because it’s not as bright and doesn’t irritate my eyes,” Stannard said.

However, in an interview with Live Science, Dr. Alon Avidan, a professor of neurology and director of the Sleep Disorders Center at the University of California, Los Angeles, said that while Night Shift should theoretically improve sleep, “We don’t have good data to show that that’s in fact what’s going to take place.” Consequently, it has not been proven to effectively diminish negative impacts of blue light to a person’s health.

In addition to negatively impacting biological health cycles, technology often provides a distraction for students, prompting them to stay up later to finish homework. In a survey conducted by the Patriot, 78 percent of students who answered say that homework delays their sleep.

According to guidance counselor Carol Heflin-Shupe, homework takes longer than it should because students are not actively working the whole time. Instead, they become distracted by spending time online or on social media. “In that three or four hours time span [for homework,] they spent two hours checking Snapchat or Skyping with somebody or using FaceTime with somebody,” Heflin-Shupe said.

Junior Jared Vogel agrees with Heflin-Shupe that homework does not provide too much of an impediment if he manages his time well. “I think homework sometimes affects the amount of sleep I get a lot, but if I stay on top of it, it’s not too bad,” Vogel said.

As this cycle continues throughout the week, some students become more tired and then proceed to sleep much later on days when they do not have school.

Junior Matthew Runyeon, for example, makes up for lost sleep during the week by “binge sleeping” on weekends and breaks. He admits that the different amounts of sleep he gets can impact his disposition and conduct in school. “Sometimes when I don’t sleep as much, I can get a little grouchy, and sometimes when I sleep a little more, I do a little better, and I’m more attentive in school,” Runyeon said. 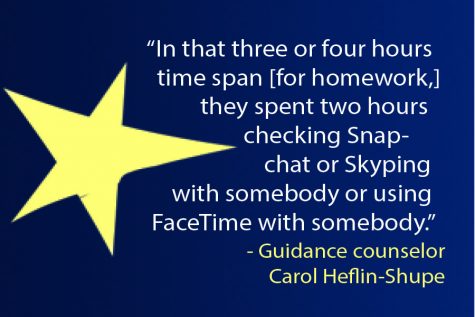 Although students like Runyeon use the weekends to catch up on sleep, binge sleeping negatively affects the body. According to the Charles Czeisler, a Harvard Medical School Senior Physician, in an interview with a CNN, this can lead to confusion and displacement in the body when the person returns to their normal sleep patterns. He goes so far as to call it a form of “chronic bingeing” and notes that it can evolve into a very inconsistent sleep schedule.

This crash-and-burn cycle makes students prone to falling asleep during school. Freshman and Sophomore Dean of Students Sean Ireton notes that it is rare for him to be sent a student
who has fallen asleep in class. When it does happen, though, he talks to them about their sleep habits. “When you have a lot of stuff going on, lots of pressure can make sleeping tougher,” Ireton said.

According to Senior Project Coordinator Louise Géczy, students sleeping during school hours became a big enough problem that administration had the couches in the Senior Classroom removed for this year.

“I took naps because I never got enough sleep senior year,” Holly Driver, class of ‘16, said.  Now that she is in college, she sleeps more often but at less consistent times of the day. “I take naps like my life depends on it,” Driver said.

While students lose sleep for a variety of reasons, they realize its importance in helping them to succeed throughout the day. Loder believes that a little extra sleep would help them to face challenges during school. “When I’m well rested, I can focus more. I pay more attention, and I’m wide awake. I try to be more interested in my classes,” Loder said.

Still wide-awake as the night creeps closer and closer to morning, junior Abigail Stepanian reaches for melatonin supplements in a desperate attempt to fall asleep. Stepanian’s insomnia has made falling asleep a struggle since she was young, but the stress of high school has only exacerbated the problem. Students like Stepanian who have trouble sleeping have been turning to sleep aids in the hopes of finally getting rest.

“Sleep aid” is a generic term which refers to anything that helps a person combat insomnia. According to Mayo Clinic, a medical research group, common sleep aids are over-the-counter medications like melatonin supplements, Unisom SleepTabs, Benadryl, Unisom SleepGels, and Valerian supplements.

These supplements have been notorious for affecting the body in negative ways. According to Psychology Today, side effects of sleep aids include headaches, nausea, next-day grogginess, and vivid dreams.

According to Psychology Today, while sleep aids like melatonin are considered natural, the supplements often take about three months of everyday use to show signs of effectiveness. However, Stepanian was not bothered by the amount of time it took for her body to adjust because she felt it would be the healthiest option.

“It’s a natural way of sleep aid. Melatonin is a chemical that already occurs in our bodies, and it makes me feel better that I’m not putting strange chemicals in my body,” Stepanian said.

While social studies teacher and psychologist Dr. Paul Lazor agrees that sleep aids can be effective for some people, he notes that even “natural” supplements are not the same as the chemicals produced in the body. The supplements, such as melatonin sleep aids, are synthetically derived.

He cautions against using these supplements regularly. “A lot of sleep aids are actually mild tranquilizers, which are sort of habit-forming,” Lazor said.

Paige Alban and Ianna Pirozzi are In-Focus Editors for The Patriot and jcpatriot.com