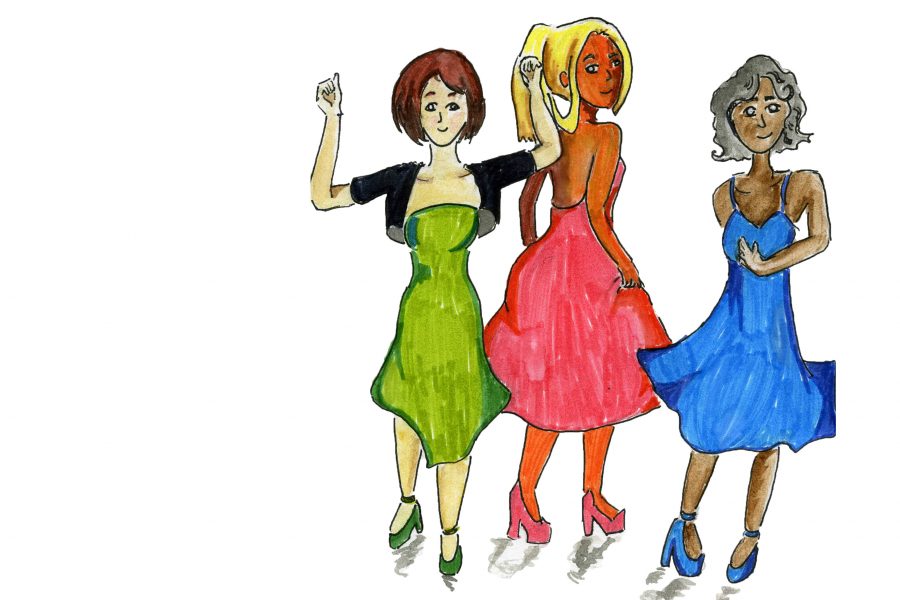 Fake it ’til you make it

As spring dances approach, many students turn to artificial tanning methods in order to replicate the summer glow that they desire

Tans fade but their impact stays

With skin tingling from the warm air that recently enveloped her skin, senior Logan Moore steps out of a tanning bed. Although she does not use tanning beds often, each time she spends a session under the lamp, she exposes herself to UV radiation. However, she sometimes turns to this method of artificial tanning when she wants results that will last for a longer amount of time than her typical spray tan.

“I will use both methods for special occasions. I will use the tanning bed if I have a longer time until the occasion, and if I don’t, I will get a spray tan,” Moore said. “Tanning you have to do for a week or more to see results. Spray tans you will see results right away.”

Moore first started tanning when she was 15 or 16 because she had easy access to artificial tanning methods. “My mom owns a hair salon and had spray tanning [there],” she said.

According to dermatology physician assistant Katie Hodges of Bernstein and Robinson Dermatology, creating an artificial tan by means of using a tanning bed is dangerous because it increases the chances of growing an atypical mole, which can cause cancer. “Generally [the moles] are benign, but when coupled with tanning beds, [they] increase risk. Family history [also] increases risks,” Hodges said.

The Centers for Disease Control and Prevention lists premature aging through wrinkles and age spots, change in skin texture, an increase in risk for potentially blinding eye diseases, and even sunburn as risks to indoor tanning. They define indoor tanning as “using a tanning bed, booth, or sunlamp to get tan.”

Some members of the JC community have been personally affected by tanning-related problems. For example, senior Olivia Barnhart’s mom, Deborah Barnhart, developed skin cancer in 2001. She had it for over a year, as her doctors did not originally believe it was cancer because the spot was so small.

According to Barnhart, her mom’s cancer was caused by “the small amount of sun exposure she did have,” rather than due to tanning habits. Now, Barnhart takes extensive precaution to try to avoid skin cancer.

“When we go in the sun, [my mom] really gets on me and my sister about sitting in the shade, wearing hats, and anything that really limits the sun getting to our skin,” Barnhart said.

English teacher Hayley Howe personally experienced melanoma in 2014. According to Howe, as a child she was out in the sun often because she lived near Ocean City, Md., and was active in sports. “It was just an outdoor childhood because I was near the beach and the bay. Even though I was outside, I always used sunscreen,” Howe said. As a teen, she got a job as a lifeguard, but she continued her skincare routine of applying and reapplying sunscreen.

In college, Howe did use tanning beds, but she did so infrequently. “I did do some tanning in college, but it was maybe 10 times. I could count the number of times on two hands,” she said. Howe received a wake-up call when several close friends who were otherwise healthy died from melanoma, which the American Cancer Society describes as a rare disease that is responsible for a majority of deaths related to skin cancer. “It was like the universe was telling me to see a dermatologist,” Howe said.

When she visited the dermatologist, there were two moles that caused concern, and further testing on the spot on her ankle came back malignant. “It was small enough that surgery was enough, but because it wasn’t in a fatty area, the scar is long,” Howe said. “It’s like poking a hole through paper. You have to fold it in weird ways to get it back together again.”

Although Howe has since made a full recovery, the process took longer than she expected. “I was on crutches for two weeks because every time I put weight on it, the stitches fell out,” she said.

Now that she is more susceptible to melanoma, Howe takes extra precautions. She continues to have routine check-ups with her dermatologist and surgeon, applies sunscreen, and wears long sleeves while she is outdoors for an extended period of time, even during the summer.

However, Hodges notes that many of the other methods that are used to create the appearance of tan skin are not harmful. “Spray tans are fine, but every time 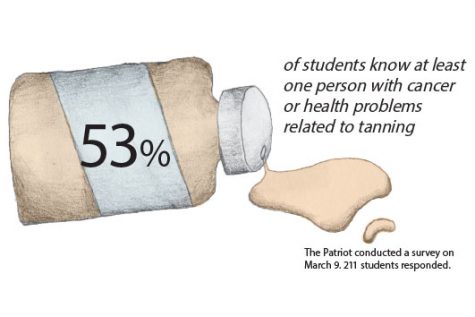 you step in a tanning bed, chances of getting cancer increases,” she said. She does suggest that before you get a spray tan, you apply sunscreen to protect your skin.

For her part, Moore is not worried about the risks of using a tanning bed because she uses them infrequently. She typically turns to spray tans because she considers them to be cheaper and more efficient. “Spray tans are more financially doable because you pay around $30, and for a tanning bed, you have to get a membership, usually with the shortest time being for a month, and the price depends on where you go,” Moore said.

While Moore is able to turn to out-of-home methods to create the look that she desires, junior Alayna Meekins uses lotions, such as Banana Boat Tanning Lotion or L’Oreal Sublime Bronze, that she can apply herself.

Altogether, though she wants a darker skin tone during winter months, Meekins is aware of the risks that other forms of tanning can cause. “I would do a spray tan, but I wouldn’t go in a [tanning] bed because of cancer. I don’t use spray tans because [using lotions] is quicker and $50 less expensive,” Meekins said.

Junior Gabriella Spilker has used every method of tanning to try and prepare for her competitive cheerleading competitions. She has been using artificial tanning methods year round since eighth grade and gets a spray tan almost every two weeks during competition season for cheerleading.

“I think [spray tans] are better than lotion because with lotion, you sometimes miss spots. The bed is nice, so you can get a natural tan, but also can cause skin cancer, so I think a good compromise is a spray tan,” Spilker said.

Fake it ’til you make it