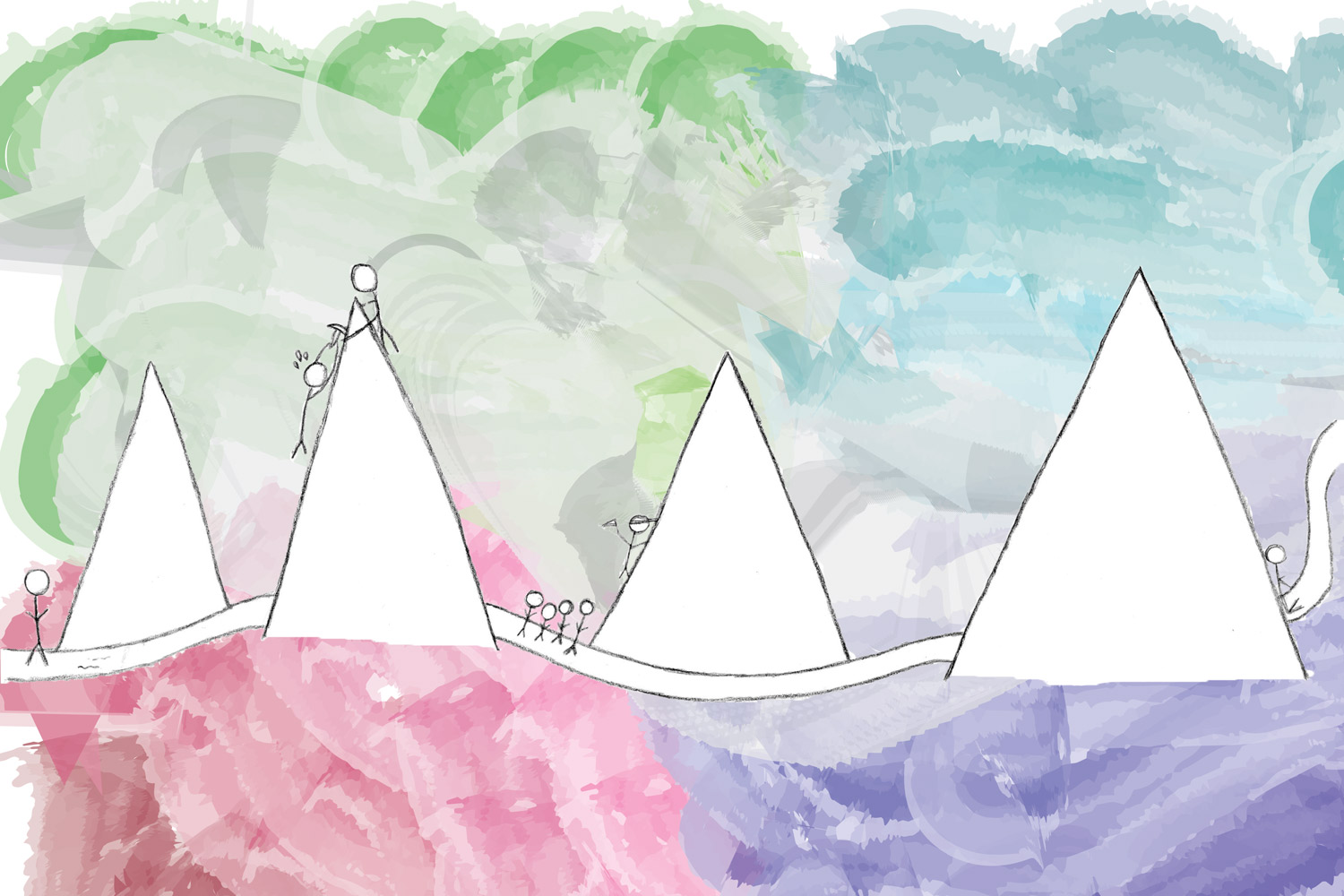 Persistent: Haitian man perseveres to save his community and his dreams

In the dead of night, several men approach a door and knock earnestly. A woman answers the door, confused because she does not recognize them. In haste, they ask to meet with her husband but are met with an apologetic response that he is not home. Unbeknownst to him at the time, this absence spared the life of Haitian Gabriel Thelus.

“They came to my house and knocked, met [my] spouse, and I’d say, [I was] fortunate that I wasn’t there. It would have been the night of my killing,” Thelus said.

The men who came to his home were looking to kill him because he wanted to majorly change the economic disparity between the rich and the poor in Haitian society.

This near-deadly encounter did not sway him, and he kept repeating to himself, “I don’t have to stop for those things because my life doesn’t belong to anyone, and I’m doing God’s work, so I have to keep going.”

Thelus, who visited JC from March 20-23, was and still is continuing his father’s mission of changing his hometown of Jacsonville, Haiti, through the development of stabler infrastructure for the village.

The mission takes on a special significance for him because Jacsonville, which was originally known as Matabonite, changed its name in honor of Thelus’ father. The community members did not want to live in a place that did not represent who they were. “We wanted a different name for the village because the people used to leave because it looked different [elsewhere],” Thelus said.

He describes himself as a “village developer,” which means that he works on projects to improve the functionality of the village because the people do not receive any assistance from the government for local improvements.

I would like to retire, but I don’t hear the call yet. I have had to tell my family, ‘Don’t be sorry for me if I get killed.’”

“I try to help out and make the community nicer, more tranquil, by picking projects and building streets so that we don’t have the community [separated] because we are trying to help the community be nice,” Thelus said.

Along with raising money to build streets and overseeing their completion, Thelus has helped to build houses and bring electricity and water systems to residents.

He also acts as a teacher and administrator for the school that he founded in order to provide greater opportunities for the children in his community. The school, Sainte Rose de Lima, currently educates about 320 students.

Socially, Thelus tries to keep religion an active part of his village. “As a leader in the community, I have to inform and to do what I can do, like Church,” Thelus said. “I want to make sure that the Gospel is getting around [and get] the community to go to church.”

Though Thelus is working to enact change that would better the lives of the Haitian poor, he notes that many of the richer members of his country are uncomfortable with the concept.

On that night when Thelus was sought out, the men were able to target Thelus because Haiti experienced a political coup in 2004, which ended that same year, so the police force was nonexistent and thus unable to protect his rights and safety.

Thelus’ changing concept of Haitian rights are viewed as a threat by the aristocracy, who believe that enhanced opportunities for the poor will lessen the established power in the country.

“A lot of people don’t understand, or they don’t want to accept change,” Thelus said. “They get so selfish. They don’t want to give up [their privileges] to let the people get a chance. Some people get frustrated because we are poor people looking for [better] conditions, and they want me to stop.”

They get so selfish. They don’t want to give up [their privileges] to let the people get a chance.”

Despite the challenges that come with opposing a culturally-accepted hierarchy that encourages limited change, Thelus still feels that it is important to work to better the community.

“I want to continue to do that because we wanted change for our village, and the fact that we didn’t know how to write and read deterred us [from going] to school and [getting] an education and trying to do it,” Thelus said.

Thelus believes that donating money is not enough of an effort by Americans to help improve conditions in Haiti, making up only “one quarter of the solution.” He adds that while prayer is an important component, having people actually visit his village is a more influential step to equality.

“I would like to see white people coming and show that we are brothers and sisters,” he said. “We can share our misery with them, that way we can show them that we can be equal.”

Though Thelus has made an impact in his community, he does not feel that he has accomplished enough in order to stop his work.“I would like to retire, but I don’t hear the call yet. I have had to tell my family, ‘Don’t be sorry for me if I get killed.’”

Sitting at her lunch table, Shannon Weber looks around and listens to her friends argue and shout an endless stream of insults at each other. It’s the same drama every day. She takes a deep breath and acknowledges the growing realization that this group of supposed “friends” is extremely toxic. She needs a change.

Weber, an alias to protect the student’s anonymity, was part of a group in which all discussions focused on one specific girl. “Everything had to be about her. You could definitely call her the queen bee of the group,” Weber said.

Weber was initially reluctant to leave her friend group because she was worried about how she would find a new crowd. “I’m a pretty shy person, so fitting into friend groups can be hard for me,” she said. However, the group of friends targeted Weber through social media and publicly embarrassed her.

Although it took Weber time to realize her situation was having a negative effect on her, she still decided to change and allow room for herself to grow. The change was voluntary, but Weber has still struggled to adapt to her new situation. “As soon as it became crystal clear what was going on, I left the group. I’m still floating around, trying to find a friend group, so it’s complicated whether I’m happier now,” Weber said.

The change for Weber has been difficult, but she admits that she would not go back. She sits with a new group at lunch, but that has not yet replaced the sense of belonging that she felt, even in her negative situation.

“I still don’t feel like I have a place. It’s complicated because there are a few burned bridges, and the girl from my old friend group has tried to patch some of them up, but I don’t want to go back,” Weber said.

Despite Weber’s ongoing struggle, she believes that she will ultimately find a new place in school with healthy relationships.

“I think that any change can be overcome in time, but you might need a second change, too, like a change in environment,” Weber said.

Strong: Junior learns how to cope

Sitting on the couch one afternoon watching “Shark Tank,” junior Jordan Wrzesien hears her mother call her brother upstairs and then shortly after, Wrzesien hears her name. Her mother, distraught, tries to explain the unimaginable reality that she had fallen asleep to the steady breathing of her husband, Wrzesien’s father, but had woken up to silence.

In January 2016, Wrzesien’s father passed away from cancer. “I woke up without a father, and there was nothing I could do about it,” Wrzesien said.

Wrzesien said the worst part of the process of adaptation is the constant reminders of memories that they could have created together. “You try to ignore it and move on with your life, but then the first holiday without him shows up, the first birthday, vacation, and all the pain you’ve worked so hard to ignore comes bubbling to the surface,” she said.

Although Wrzesien admits a change as impactful as the death of a parent may seem impossible to overcome, it can and did happen, and, whether or not she wants to, she has to work to move on. “You find strength in others to accept the unacceptable. And with strength comes hope for the future and hope that you’ll see them again,” Wrzesien said. “You just keep moving forward, and that’s how you adapt and accept a change as drastic as that.”

Wrzesien claims that anything, even a tragic death, cannot eradicate the ability to move on with life.

“You can overcome anything as long as you have the means and the tools. In this case, the means were the promise of a future I created myself, and the ideal that I wanted to celebrate my dad’s life, and the tools were my friends and family,” Wrzesien said.

Despite the continuing hardship that Wrzesien faces, she has managed to find some good in the situation by learning lessons about herself. “It makes you appreciate what you have and who you have because you realize that it really can change in an instant,” she said. “When you have to take care of the person who took care of you all your life, it humbles you and makes you grow up really quickly.”

Even though Wrzesien was faced with many challenges, she has kept an optimistic mindset toward change. “It makes you stronger, it makes you humble, and it makes you appreciative of everything you have,” she said.

Paige Alban and Ianna Pirozzi are In-Focus Editors for The Patriot and jcpatriot.com.