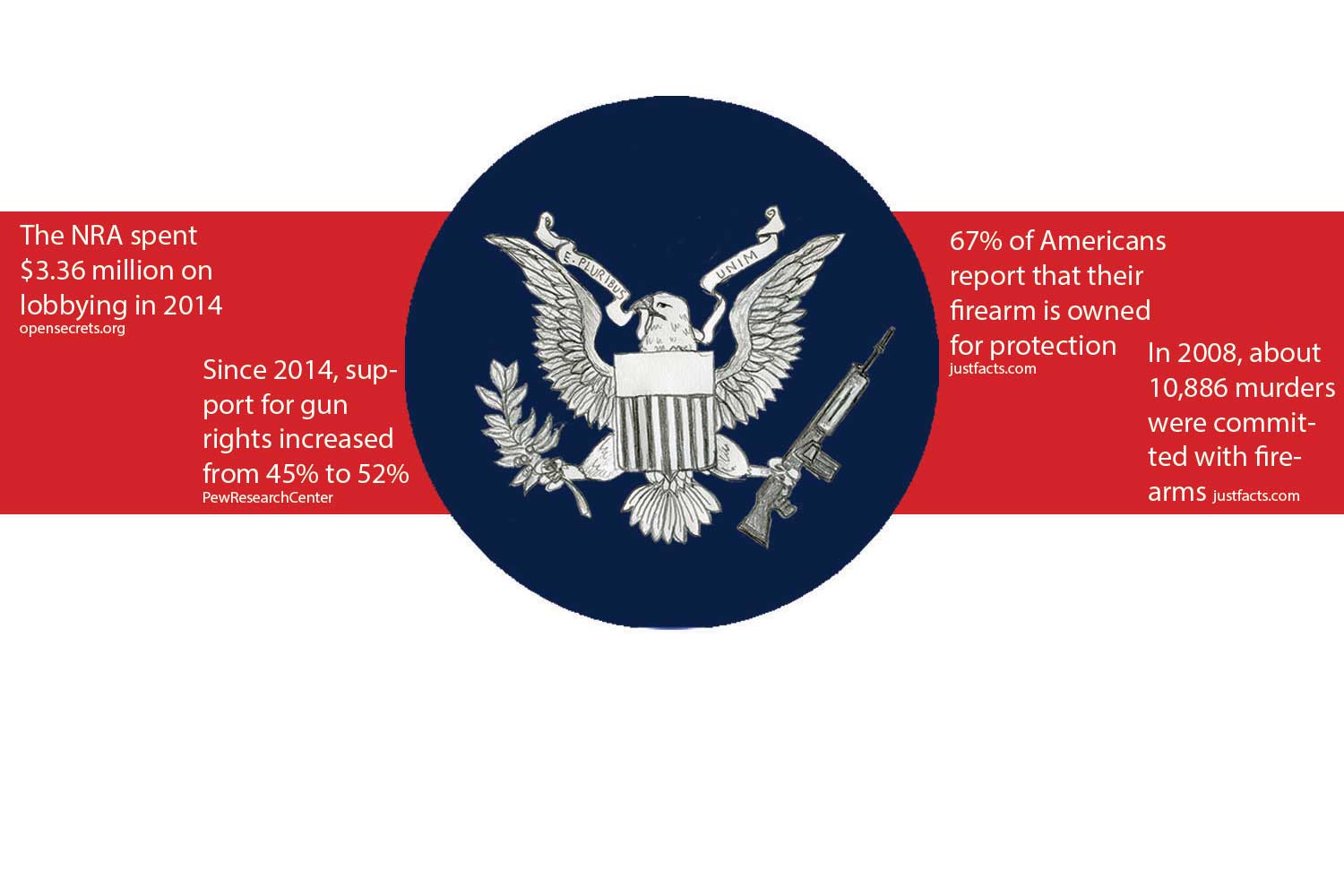 The Patriot Debates whether gun control policies are important in fighting gun violence or infringe on American’s rights.

What if students from an entire class at Saint Margaret’s middle school disappeared from their families’ lives? Or almost the entire middle school at Harford Day School? What about half the students at St. Joan of Arc or almost 1 in 12 students at Bel Air Middle?

The equivalent deaths happened across the nation in 2012 and 2013.

The difference is that instead of being centered in one community, the preventable deaths of almost 100 children were spread out across a nation which stubbornly refused to open its eyes to the source of so much horror.

It is time for America to open its eyes and address the plague of gun violence across our nation.

For some reason the same is not true for gun violence. When 33,804 people died from firearms in 2013, American lawmakers on the federal level did nothing to combat one of the largest killers in our country.

The problem is that gun sales are big business and organizations such as the National Rifle Association have deep pockets. According to opensecrets.org, an organization dedicated to tracking money in politics, the NRA and its affiliates contributed almost a million dollars to candidates and spent $3,360,000 lobbying in 2014 alone.

The only way to combat money like that is with votes. Political change comes when voters start voting out politicians who work with the NRA and voting in politicians who want to fix the problem.

The solution to gun violence in terms of gun control is two-fold. The first step is to ban all assault rifles. There is no legal reason to own a firearm which is explicitly designed for killing a large amount of people in a small amount of time. Assault rifles are bad for home defense because of their large caliber bullet and length. They are illegal to hunt with in most places and are not suited to most forms of hunting. That leaves recreational target practice as the primary legal use, which is a ridiculous reason to sell weapons designed for war.

The second aspect of gun control is to start treating guns as the dangerous machines that they are. In order to get a driver’s license in Maryland, a mandatory 60 hours of documented practice is required as well as 30 hours of instruction from a government trained instructor and a test to prove competency.

In order to buy a longarm (rifle or shotgun) in Maryland, you need to show identification. That’s it.

This disparity is as glaring as it is confusing. Gun deaths in America are up to 10.4 per 100,000 people, the highest of any developed nation according to statistics collected by the non-profit health research center kff.org. The majority of these deaths are not crimes but accidental deaths from improperly handled or stored firearms. That is why instruction and training are important for dealing with gun deaths.

A combination of expanded background checks, prolonged training, and a total assault rifle ban will cut down on intentional and unintentional gun violence and bring the U.S.A into the 21st century with all of its civilized counterparts.

Will Bolton is a Perspective Editor for The Patriot and jcpatriot.org

From the moment Congress approved the Bill of Rights on September 25, 1789, the nation ensure the right to bear armed weapons for American citizens. Congress promised that right would not be defied in any way by the government and that shouldn’t change even now.

The government should not enact gun control laws because the Constitution states and protects its citizens right to carry a gun.

In the last few months alone, the cause of concern due to gun violence and mass school shootings has risen. From the shooting at the Umpqua Community College in Oregon to the shooting at Northern Arizona University, the amount of people who are forced to stare straight into the barrel of a gun before being severely injured or fatally shot is out of control.

Because of the shootings and outcry from citizens to have something done, the government has been getting involved to try to prevent yet another public shooting crisis from occurring.

Or so they think.

Back in 2011, when Arizona’s Democratic House of Representatives member Gabrielle Giffords was shot, President Barack Obama flew to Arizona to immediately address the gun control issue.

Four years later and each time there is a shooting that replays inside the homes of millions of viewers around the world, the government feels the need to intervene. After the Charleston shooting on June 17, 2015, President Obama and other representatives from the House said that actions need to be taken immediately.

The truth is, the government can’t really do a thing.

They can calm the hearts and minds of millions of Americans, but they can’t stop an issue that’s been happening for years. During Obama’s speech after consoling Arizona’s community on the attack back in 2011 he said the following: “None of us can know with any certainty what might have stopped these shots from being fired, or what thoughts lurked in the inner recesses of a violent man’s mind.”

How is it possible for the government to place gun control laws on the country without truly knowing the motives of people behind the trigger?

Government intervention will never work and it’s never going to happen. Congressional Democrats in 2011 tried to pass a federal legislative bill banning any weapons with 10 or more rounds of ammunition in it. The bill was denied. The government isn’t stupid. They know that if they suddenly put all these gun control laws into effect people are going to get angry.

The Constitution trumps the government over everything, guns being included on that list. Gun control laws wouldn’t stop the violence going on, it’d make it worse. You’d only restrict law abiding citizens from getting a gun but you’ll always have some people who want guns for all the wrong motives and they’ll get it from people who agree with those motives. So now you have a mad man with an illegal gun on the loose, everyone is pointing fingers and the problem still isn’t solved.

A better solution would be to educate the public on how to be safe in their surroundings. Public service announcements should be available to the public on signs of potential shootings in schools. Their should also be immediate action plans in case a shooting breaks out as well.

You can’t stop people from carrying guns, but you can stop a gun from being turned on you.

Azanae Barrow is a Community Editor for The Patriot and jcpatriot.com.