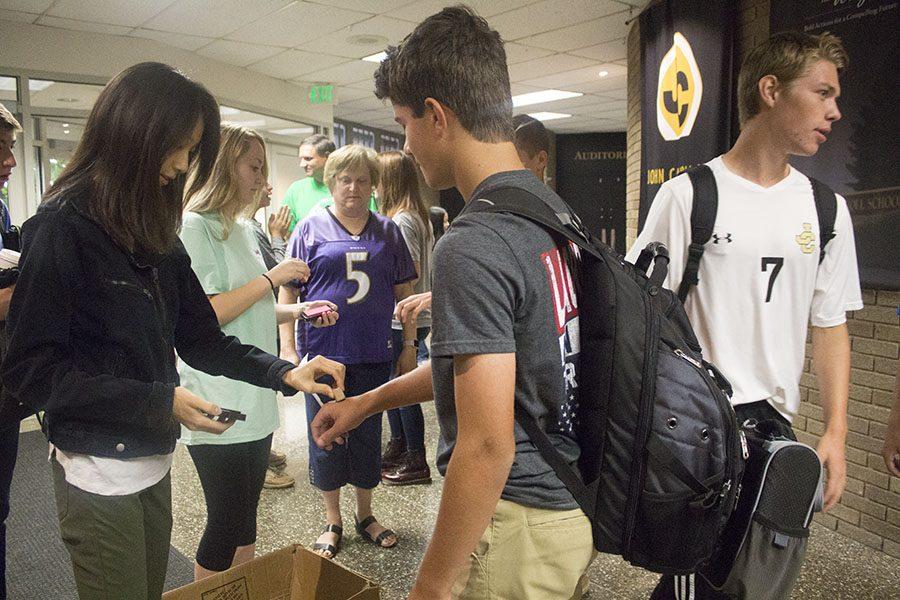 Junior Service Club President Caitlyn Trent stamps students’ hands, showing they donated money to the Ronald McDonald House, an organization that helps house and fund the families of children who have cancer. For a majority of dress down days, students donate a few dollars in order to be able to dress down, but does this act still qualify as charitable donation?

Patriot Debate: Dressing down for charity

The Patriot debates whether the ability to buy dress-down days is an effective way to raise money or whether it defeats the purpose of charity.

In an ideal world, the homeless have shelter, the hungry have food, and the poor have enough money to provide for their basic needs.

This situation just simply isn’t feasible in the 21st century, which is why so many nonprofit organizations ask for donations in order to support the needy in the community.

At JC, students who make contributions to these groups have been given several opportunities to dress out of uniform for the day, but the reception of a reward detracts from otherwise charitable intentions.

Charity, at its core, is based around helping others without the need for reimbursement. Thus, the concept of earning a dress down day for being a good person and labeling it as a “donation” is ridiculous because it essentially disregards half of the principles of charity.

An act of charity isn’t, and shouldn’t be, like a trip to the grocery store where you look around for something you like, hand over some money, and take it with you as you go on your merry way. It is not a business transaction or a compromise where you get something back in return. Charity is a trip down a one-way street. There should not be an expectation of a reward of any kind in the opposite direction.

The reasoning behind the incentive is good in theory, as it winds up collecting more money for various groups like Ronald McDonald House Charities, the Cambiando Vidas Service Trip to the Dominican Republic, or the Leukemia & Lymphoma Society. The practice unfortunately falls short because students are only donating so that they receive something in return

Does it objectively matter how the money or supplies get to a particular cause? No, but that “how” determines if an act can be described as charity. Benefits have the power to increase the number of altruistic acts, but that often comes at the expense of being the sole purpose of the act.

During my life, I have been on both the receiving and serving ends of the Ronald McDonald House Charities. The monetary donations were always appreciated, but the people who go out of their way to actually sacrifice their time by preparing a meal were the true heroes.

Students have no problem scraping together $5 to buy a cup of coffee at Starbucks, but they balk in real situations to do good for others. Ultimately, this reflects back poorly on themselves as individuals.

Students should spare themselves the embarrassment of needing an incentive to donate for children with cancer. Instead, they should look for opportunities to be selfless in ways that show a little bit of effort. Only then can they be regarded as “true heroes,” too.

Merriam-Webster dictionary defines charity as “generosity and helpfulness especially toward the needy or suffering.”

Charity is an essential part of our identity as a Catholic school. One of the most effective ways that students engage with charity at JC is through dress-down days, which allow students to dress out of uniform in exchange for a charitable contribution.

If students are asked to give a donation without a gimmick like a dress-down day, it can be difficult to remember to bring in the money. Students can be too stressed and preoccupied to focus on making it a point to bring in a cash contribution.

Students often have good intentions and want to support causes like the Ronald McDonald House Charities, the families of the police officers shot outside the Abingdon Panera Bread, and the Cambiando Vidas service trip to the Dominican Republic. Having a dress-down day is an easy way to get students’ attention. It’s a physical reminder to donate money toward a charity.

When students dress down on a set day and remember to donate a specific amount of money, it’s much easier for an organization to set fundraising goals. Money can be raised quickly and efficiently and spent on those in need as soon as possible.

Dressing down also raises awareness for a charity. Students are united in support of the cause that the charity benefits. This awareness is becomes more prominent when students receive wrist bands they must wear to dress down. These usually say the name of the charity and act as a reminder of the importance of the cause it supports after the dress-down day is over.

Other than the occasional bracelet, students do not receive anything of value in exchange for donations. Although dress-down days give incentive for students to give money, this incentive isn’t to be confused with a reward.

Dress-down days are an active way for our school community to engage with charitable organizations. They are proven to be an effective method for grabbing the attention of students, prompting them to give for a cause they care about supporting.

Part of JC’s mission statement is “instilling Catholic values” in its students. Charity is at the forefront of these values, and dressing down acts as positive encouragement for students to learn generosity and kindness, while giving them the opportunity to wear sweatpants to school.

Christina Giovanazi is a Community Editor for The Patriot and jcpatriot.com.

Patriot Debate: Dressing down for charity