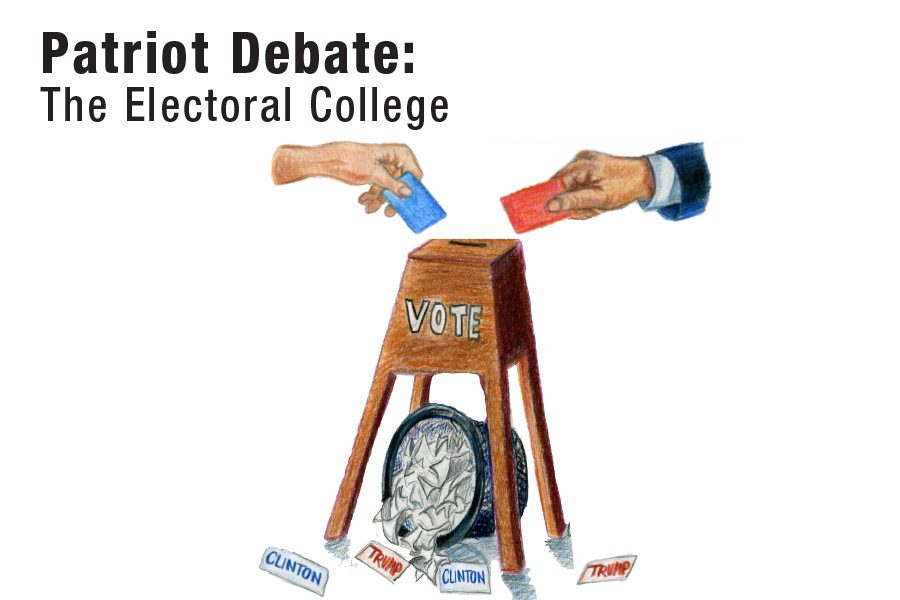 The Electoral College is used to elect the President of the United States. Each state is allotted a certain number of electors based on the number of delegates the state has in the House of Representatives as well as the number of senators. During the presidential election, the candidate who wins the popular vote in a state thereby wins the electoral votes for that state. The candidate who receives at least 270 electoral votes wins the election.

The Electoral College is one that is outdated, unreliable, and in direct conflict with our rights, so why is it still in use? Are the American people not trusted to make the right decision for their  country?

When the Electoral College was first instituted in 1804, it served as a way to guarantee that the uneducated and illiterate voters were not the ones making decisions.

This was because more often than not they were incapable of making the right one. However, in today’s society, where the majority of the population is literate and educated, this practice is obsolete and should be eradicated.

Although officials are elected by the public into their positions, there is still a possibility for a member of the College to vote against the general sentiments of the public.

They are just as human as the rest of the population and are just as capable, if not more, of manipulating the system.

Even though the Electoral College can be beneficial in sorting out the votes that do not represent the majority opinion of a district, it poses a threat to the ideals of democracy.

In 2012, 93 million citizens did not vote, according to the Bipartisan Policy Center. According to “American Government: Power and Politics,” the text JC students use in AP U.S. Government, citizens often refrain from voting in the Electoral College system because they feel their voices aren’t being heard.

The popular vote makes everyone’s vote count, regardless of the political ideology of the area they reside in”

In the case of the popular vote, constituents’ votes actually make an impact, something that citizens appreciate. The popular vote makes everyone’s vote count, regardless of the political ideology of the area they reside in.

The popular vote tallies every single vote cast for a candidate instead of counting the number of votes of districts who supported a candidate.

When more people are involved in the political process, the president selected represents the will of the people more accurately.

If voters felt that their voice was heard, they might be more willing to vote, something that could positively impact our society.

Overall, if the Electoral College voting process changes into one that is closer to a true democratic process, then Americans’ political beliefs will finally be heard.

Elizabeth Harmison is an In-Focus editor for The Patriot and jcpatriot.com.

Americans seek the best of everything, and they don’t care who knows it. They want the best economy, the best military, the best technology, and the best leader. Why then, would they still use the Electoral College for presidential elections? It must represent them in the best way.

First and foremost, the Electoral College emphasizes the importance of state rights in a time when federal power reigns supreme. In a country where the legislative process spans across several levels from local to statewide to federal, it is impossible to ignore the middle step in crucial decisions without disproportionately skewing power distribution.

Through the Electoral College, a voter casts his opinion in order to fight for multiple represented votes in the form of an elector”

If individual voters and federal power were the only important parts of the political hierarchy, then the country might as well be called “the Conglomerate of Independent Voters,” not the United States of America.

By making the presidential election a more local affair, candidates are forced to vie for the support of the population as a whole, not just for the largest demographic group.

They cannot ignore racial or ethnic minorities, as they might during a popular election, because they must win support in culturally-diverse regions of the country.

Technically, as critics of the Electoral College say, the electors for each state do not have to vote for the candidate that they are pledged to. However, these “faithless electors” are exceedingly rare. There have only been eight since 1950, and none of those instances affected the outcome of the election.

Ultimately, a vote under the Electoral College system is worth more than a vote under the popular vote system. According to the Bipartisan Policy Center, there were 126 million total voters in the U.S. during the presidential election in 2012 and 2.5 million in Maryland alone. In the overall election, a single vote is worth significantly less than in the closer state elections. Through the Electoral College, a voter casts his opinion in order to fight for multiple represented votes in the form of an elector.

Furthermore, it is rare that the Electoral College winner does not reflect the popular choice, so the eventual president isn’t “cheating” his way into office. In fact, a discrepancy has only happened four times: 1824, 1876, 1888, and 2000.

The Electoral College is more than just a tradition or a concept from the Founding Fathers that has since ceased to become relevant. It has evolved over time to fit the needs of the country, but it has nonetheless remained the most logical way to elect the president.