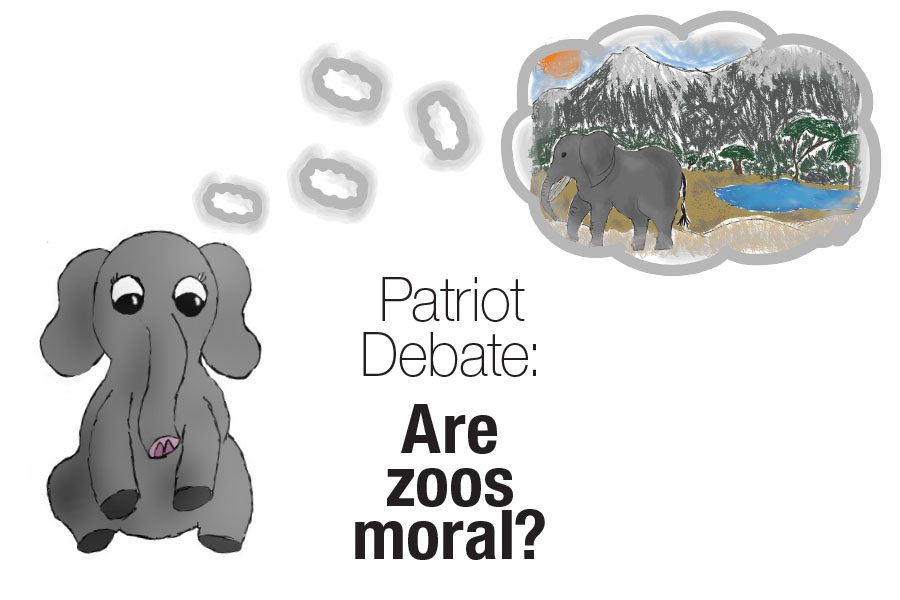 Is animal confinement, such as zoos, a positive option for the protection of animals in the long run?

According to Merriam Webster, a zoo is defined as “an establishment that maintains a collection of wild animals, typically in a park or garden, for study, conservation, or display to the public.” Would you strip away an animal’s protection and sanctuary in a zoo because of a simple stigma on zoos?

By their nature, zoos are locations where animals are taken to be saved and protected. Why then are they portrayed as establishments designed to humiliate and degrade animals, when they are made to protect and preserve species? To say that their sole purpose is to contain animals for entertainment and our leisure is simply incorrect.

It’s evident that zoos serve a larger purpose than simple entertainment, and they often facilitate animal rehabilitation. The Association of Zoos and Aquariums (AZA) is a conservationist group dedicated to the protection of endangered species.

According to AZA, they annually spend $160 million on conservation of endangered species. They ensure that zoos under their umbrella are committed to the rehabilitation of animals so they can be released at a later date.

In addition, the AZA has a government affairs team to present issues to Congress and get more animal rights laws passed to foster better relationships with federal and non-federal agencies alike. This helps protect and get better care for the animals in their establishments.

Every year, organizations including People for the Ethical Treatment of Animals (PETA), demonize zoos for their cruel treatment of animals when many of these claims are inaccurate, if not completely false. Zoos have a bad reputation for treating animals inhumanely, and while this used to be true in a few establishments, this has been remedied in every regard.

Zoos protect animals from the detrimental effects that humans and other factors have on their populations and habitats. Lack of nutrition and habitat are a major threat to the populations of endangered animals everywhere, and zoos assist with this by providing nutrition they wouldn’t have access to elsewhere. As a result, they give endangered species the opportunity to continue to survive.

They assist in the reestablishment of many critically endangered species, as well as in the community through educating children and adults on how they can preserve species and the environments they reside in. When people learn about these animals and the issues they face in the wild, they will call for their protection and human intervention to protect and save them.

Zoos not only help preserve animals, but they also give our species an opportunity to mingle and cooperate with other species, thus fostering a positive environment and a much more unified ecosystem. People believe animals lose their rights in zoos, but they have even less rights when they are over-hunted and experience the destruction of their natural habitats.

Zoos act as a safe haven for these animals who would be driven extinct otherwise by poaching, deforestation, or other loss of habitable ground, and environmental destruction caused by pollution. In zoos they are safe from all of these factors, and their rights are preserved and protected.

Zoos are important to protect and save endangered species. So before you demonize your local zoo, please consider what they do to help to protect species that would go extinct otherwise.

Walking through the Baltimore Zoo on a blistering July day, I can’t help but notice  the grim looks on the faces of the animals. The polar bears sit in open sunlight in pens with fences separating them. The chimpanzees are piled into a glass enclosure and bang against the glass as they are bombarded with camera flashes and loud noises. The scene sickens me, and I wonder, “What they did to deserve this?”

Each year, nearly half of the American population visits zoos and aquariums, according to Statistic Brain, a research institute dedicated to tabulating numbers and determining statistics.

With modern technology and advances in photo and video capturing, the debate over whether the existence of these establishments is necessary or ethical has become more prevalent. Even in 2016, there is little legislation protecting the rights of the animals in captivity.

The only major law enacted in the United States is the Animal Welfare Act, which only protects warm-blooded mammals like elephants, tigers, and lions from unfair treatment.All other animals are excluded from this act, and there are only minimal standards for the conditions the animals are subjected to in captivity.

The bottom line is that zoos and aquariums violate an animal’s right to life. They are taken from their natural habitat and placed in conditions where they are bored, restricted in movement, and subjected to stressful and unnatural situations on a daily basis.

These conditions alter the behavior and genetic makeup of the animals over time. The animals adapt to these unnatural situations and pass these traits onto their offspring.

Animals that are eventually released have problems readapting to their natural environment as they often lose necessary instincts regarding survival and interaction.

While many argue that zoos and aquariums are beneficial for the preservation of endangered species and the ability to conduct scientific research, they overstep the boundaries of human influence. Humans are merely part of the natural order and have no right or authority to alter its other members.

Zoos and aquariums can foster positive relationships between humans and animals and inspire concern for preservation, but ultimately their existence causes more harm than good. Animals have a right to exist in the wild, in the habitats they are naturally adapted to, and to be subjected to natural selection.

For those who want the opportunity to learn more about animals, visiting their actual habitats or sanctuaries where they dwell is a far more acceptable option.

In these areas, the animals survive in the proper conditions with the freedoms granted to them by their existence in the natural world. The utilization of technology to learn about animals is another alternative to visiting aquariums and zoos. High definition images and videos captured in the most remote areas provide the same insights and eliminate the cruelty.

It is undeniable that zoos and aquariums are large sources of revenue and are enjoyed by millions each year, but they cannot continue in their current state. Stricter legislation needs to be passed to protect all animals, not just the large, warm-blooded animals that garner compassion. Humanity needs to finally open its collective eyes and realize that zoos and aquariums are violating and harming their natural brothers and sisters.

Edward Benner is a News Editor for The Patriot and jcpatriot.com.