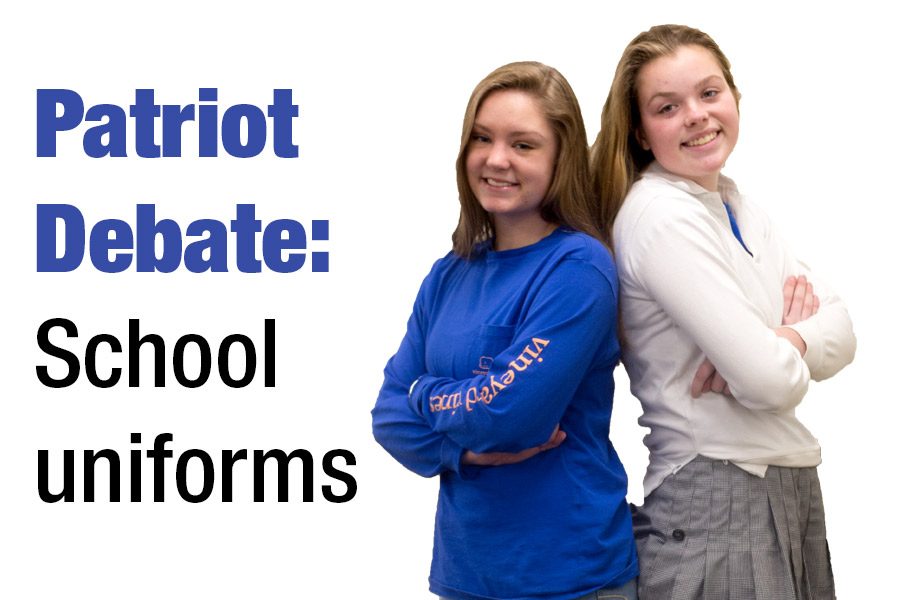 Do uniforms allow students to better explore their individuality?

Walking down the halls on a typical dress down day, I observe the bright colors and laughter emanating from my fellow classmates. The halls swirl through my head with a vibrancy in stark contrast to the usual gloomy grey and black uniforms. As I glance around, I smile and take in this joyous environment.

These smiles may be because the students are comfortable in their own clothing for once, the opposite of their usual polos and uniform bottoms. More importantly, it may be because they are allowed to express themselves for a change, even through something as simple as clothing.

This lack of comfort associated with uniforms is nowhere more apparent than when a school has gendered uniforms (females wearing skirts and males wearing pants), since any students who do not conform to these genders, such as LGBTQ students, may feel uncomfortable in the place where they are supposedly allowed to be safe and grow.

In a letter written to the president of the United States, male transgender student ‘Seamus’ notes that he is forced to wear a skirt and blouse all day, which makes him highly uncomfortable. Furthermore, he says that wearing this uniform, “nearly destroyed me.”

In addition to making some students unnecessarily uncomfortable, uniforms can present complications for teachers. Skirt length policies put teachers in difficult positions when they have to address female students on the length of their skirt.

While students must be judged on arbitrary glances by teachers, they are also measured against their peers. Child and Teen Development Specialist Robyn Silverman said in an interview with the Today Show that female students compare their body types to fellow students wearing the same uniform.

“As a body image expert, I hear from students all the time that they feel it allows for a lot of comparison,” she said.

According to Silverman, this comparison creates a hostile environment for all students as they wind up distracted from the learning experience. Students want some way to express themselves, despite a strict dress code which implements some restrictions.

According to National Association of Elementary School Principals, approximately 90 percent of school leaders prefer to keep the dress code simple by requiring students to wear polos and chinos in place of dress shirts and ties.

This simplicity and uniformity hinders students’ ability to grow as independent decision makers.

By requiring students to wear a uniform every day, we strip them of having the freedom of deciding something as simple as clothing, which is a crucial component of self-expression.

While schools may aim to develop students as holistic individuals, their uniform policies contradict this message. Instead, they tell students to blend into a crowd, and to submit to authority unquestionably.

Overall, being able to pick your own clothing benefits the students and the community. Allowing students to choose their clothing lets students express themselves and takes the stress of uncomfortable confrontation off of teachers, creating a more peaceful environment.

Paige Alban is a In-Focus Editor for The Patriot and jcpatriot.com.

As I stand staring into my closet, all I can see are tangible fragments of my stress. An hour has already passed and several combinations of different clothing options are well exhausted in my search for a socially acceptable outfit. The longer I stare, the higher my anxiety level increases.

These high levels of anxiety and stress are inevitable when dress down days take place.

Imagine attending a school where every night you experience these emotions while you pick out the outfit for the following day – it’s not one I would like to attend.

Although I realize that I am stressed more than the average person, it is common for people to worry about dress down days and whether they will be overdressed or underdressed when compared to their friends.

Fortunately, JC’s uniform policy eliminates these stressors and creates a positive atmosphere that allows us to not only explore our creative mind-set by encouraging us to express ourselves in more creative ways, but also to be able to unite as a community.

According to a survey conducted in 2013 by the National Association of Elementary School Principals, school leaders who have a school uniform policy in place believe that it has made a “positive impact on peer pressure and bullying.”

A mandatory school uniform eliminates pressure to have the “trendiest” styles and to dress the same way as everyone else.

As a result, students are able to focus more on their academics instead of having to worry about choosing an outfit each night.

This helps create a positive atmosphere that encourages achievement rather than one that focuses on who’s wearing the most expensive brand.

Uniforms do not limit one’s ability to express themselves and their beliefs. Rather they encourage others to find a creative way to do so.

In the Supreme Court Case Tinker v. Des Moines Independent Community School District, students were suspended after wearing black armbands to show their opposition to the Vietnam War. The Supreme Court declared that students’ constitutional right to free speech “does not relate to regulation of the length of skirts or type of clothing.”

This means that students still have the opportunity to express their own individuality while still in uniform.

Having uniforms encourages students to explore other ways to express themselves rather than relying on their clothes to do it for them. Oftentimes, students do this by wearing pins on their jackets or skirts as well as putting stickers on their laptops.

By wearing a school uniform every day, we present ourselves as a large community and are able to connect through the one thing we all have in common: we are JC students who strive for excellence.

Wearing a uniform each day helps us be easily identifiable and can provide a professional look to outsiders.

Overall, uniforms relieve students from the stress of choosing an outfit each night. The positive atmosphere that is established allows us to explore our own individuality by finding creative ways to express ourselves and to identify as an entire community together.

Caroline Cooney is the Editor in Chief of The Patriot and jcpatriot.com.