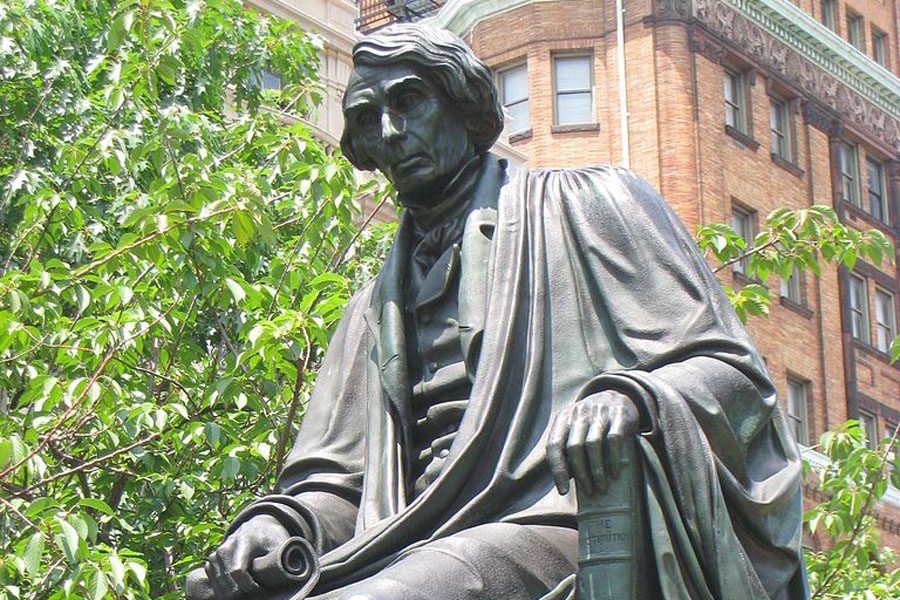 This is the statue of Roger B. Taney that once stood in Baltimore in Mount Vernon Place. The Statue was removed on Aug. 12 after the city council voted unanimously to take it down.

In Baltimore, statues were removed on the grounds that they were racist. Some believe this is the right way to go, while others think differently.

In Baltimore, several statues of Confederate leaders have been removed, including the four taken down on Aug. 16. This act was a blatant disregard for our history and America’s legacy. Before everyone gets up in arms and calls me a Confederate sympathiser, I am not. I’m just a guy who loves history and loves America even more.

The statues that were removed should not have been taken down, especially the statue of former Supreme Court Chief Justice Roger B. Taney.

His statue coming down was a direct result of his ruling in the Dred Scott case, but he had no connection to the Confederacy at all. The Dred Scott decision was counterproductive, but only served as Taney’s interpretation of the law and not his moral views. Earlier in his life, Taney freed nearly a dozen slaves that were given to him.

If all statues remotely related to racism, the Confederacy, or white supremacy are being torn down, why not go ahead and tear down the Washington Monument, Jefferson Memorial, or Lincoln Memorial? George Washington saw African Americans as inferior, Thomas Jefferson had a harem of slaves, and Lincoln was far from the wholesome abolitionist everybody thought he was.

Lincoln only freed the southern slaves and let the northern states keep theirs. He once said, “If I could save the Union without freeing any slave, I would do it.” He wasn’t a staunch anti-slavery activist like our history textbooks made him out to be. Think about all the monuments dedicated to people important in history who owned slaves or believed African Americans were inferior.

Many of the people who want to take down these statues can be as radical as the extremists who threaten violence to keep them up. I don’t agree with being that fanatical about anything, but it goes to show you that you can’t just say people are crazy white supremacists for wanting to keep these statues up.

Yes, the Confederate States of America were not a good model for building a nation, but keeping these statues up can help remind us all of the past mistakes our country has made and encourage us not to repeat them again. As the saying goes, “United we stand, divided we fall.”

The statues should come down

In Charlottesville, Virginia on Aug. 12, a white supremacist drove a car into a group of activists who were supporting the removal of a statue of Robert E. Lee, killing one and wounding 19.  In response to these protests and the attack, the Baltimore City Council removed four Confederate statues standing around the city in the middle of the night on Aug. 16. The decision to remove these statues from Baltimore was the correct decision because it helps keep the citizens safe.

This decision was made in light of recent dangerous activities of white supremacists and far-right groups across the nation. It is in the best interest of Baltimore citizens for the City Council to take down the statues because it will give these groups less of a reason to unite and become a threat to others. However, the statues are still aspects of our American history and they should not be vandalized.

The statues should be put in a museum where they will be preserved and viewed by choice. They should remain there until the actions of white supremacy groups die down and until acts of violence become less frequent. Afterward, there should be a council that decides what should happen to the statues.

The city government made the correct decision by taking them down overnight. This decision was fast, which did not give people time to react negatively or interfere with the removal, meaning white supremacist groups had no time to organize and arrange a protest. The removal of the statutes will end up preventing violence caused by what they represent in the long run and will keep the citizens safe.

Considering the fact that one of these statues was erected in 1948, during the era of Jim Crow laws, it is clear that their purpose was to scare African Americans and other minorities. These statues were built with a racist intention that was bent on disenfranchising people that are not white. This is not okay and is one more reason that it was the correct decision that the statues were removed.

In Baltimore, there is controversy surrounding the statue of former Chief Justice of the Supreme Court Roger B. Taney that was taken down along with the three other Confederate statues. Taney presided over the Dred Scott v. Sandford case. Even though he supported abolitionists in other cases, in Dred Scott v. Sandford, Taney failed to recognize that slaves are people and ruled that they were property. That means this statue could have caused an argument or ignite another situation, similar to what took place in Charlottesville, if it was taken down later instead of now, because people are still furious at white supremacist groups and remember what harm they can do.

Even though these statues represent views that are frowned upon today, they are pieces of history and should be treated with respect. They should be placed in a museum with other pieces of history. In order to prevent white supremacist groups from gaining traction and meeting in Baltimore where there could be another tragedy, all the Confederate statues must be taken down. Keeping the citizens of this great city safe should be the number one priority of the government and taking down the statues is a definitive step towards that goal.

Ryan Griffin is a Perspectives Editor for The Patriot and jcpatriot.com.