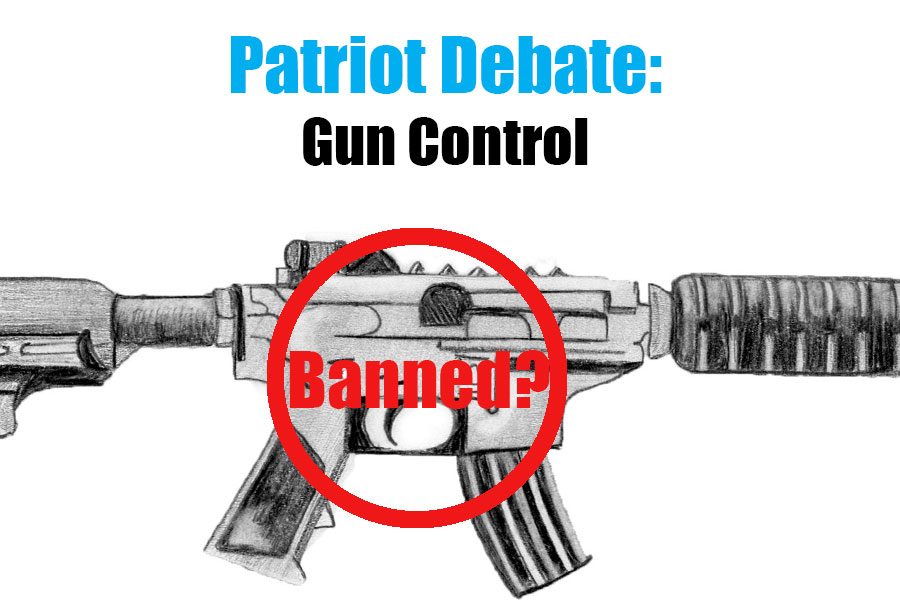 Imagine being home alone with nobody near you. You hear a banging on the door, but you aren’t expecting anyone. The pounding gets louder, and there’s a crash as the door breaks.You whip out your phone and dial 911. They say they’ll be there in ten minutes, but you need them now. You hear pounding footsteps getting closer. You grab your gun and wait in a room alone, finding a little comfort in the fact that you can protect yourself from the intruder.

One of the main reasons for owning a firearm is for self-defense. When there is a crime, preventing law-abiding citizens from owning guns only limits their ability to protect themselves against aggressors.

According to a study by The Economist, the fastest police response time in the country is nine minutes in New York City. When going into more suburban and rural areas, the time it takes increases, as there are fewer police officers and a larger radius to cover.
When it comes to having seconds between being dead or being alive, protection is key. While only about one fifth of all criminals carry guns when committing a crime, the victims do not know if the criminal is armed and they need a way to make sure they can defend themself.

While it is true that the Second Amendment was ratified and put into action in 1791, that doesn’t make it any less significant in modern times. This has led to a claim that because the Second Amendment originally applied to muskets, it does not apply to modern firearms. This is not the case, as our understanding of all the amendments has changed, but there should be clear definitions of what is a firearm and what should be purchasable. Other amendments have been interpreted to consider the current time and technology, with one example being that the Freedom of Speech, granted by the First Amendment, has come to protect people’s speech on the internet.

The Founding Fathers could not predict the future and all the different technologies there would be, yet all the other amendments interpreted for modern times, so why hasn’t the Second Amendment been interpreted as well?

The Supreme Court has also agreed through cases such as District of Columbia v. Heller and McDonald v. City of Chicago. These cases are clear examples that the Second Amendment is there to allow private citizens to own guns.

As Benjamin Franklin said, “Those who would give up essential liberty, to purchase a little temporary safety, deserve neither liberty nor safety.” He captures the situation perfectly. If people chose to give up the liberty to own guns. Then they would lose other liberties as well.

While gaining some extra safety may sound nice, sacrifing principles and liberty are harmful mistakes that only cause trouble later on. One example of this happening is through the PATRIOT Act. This act was intended to capture more information about terrorists, but instead it allows the NSA and the government to spy on your e-mails and violate your privacy.
People carrying firearms helps to protect the people. If a criminal thinks that someone they might harm has a gun, then they will more likely think about not committing the crime for fear of being shot. Gun control will take away everybody’s inalienable right.

Ryan Griffin is an Perspectives Editor for The Patriot and jcpatriot.org.

I turn on the TV and hear the not-so-shocking news that another shooting has occurred in a school, at a concert, etc. Yes, I’m devastated whenever there is news of a shooting, but what is sad is that I’m not surprised anymore. In today’s world, the reality I have come to realize is that I could go to the mall, a restaurant, or even school, and there’s a possibility that I could become a victim of a mass shooting.

We hear about mass shootings in America all the time, but why is there barely any news of other countries being affected by one? It is possible that the American laws regarding gun ownership contribute to the number of shootings that occur. According to a survey by Vox, “America has 4.4 percent of the world’s population, but almost half of the civilian-owned guns in the world.” There is no way the U.S. would suffer more severely from gun violence if we allowed fewer civilians to own firearms. With better gun control, tragedies like the Las Vegas Shooting on Oct. 1 may not have happened in the first place.

Most of the shooters causing these mass shootings use assault rifles, but this is not the case in which these lethal weapons cause harm. According to a study published by George Mason University, automatic weapons are also used alarmingly often in “ordinary crimes of violence and attacks on police officers.” Between 1994 and 2004, “the federal government banned military-style semiautomatic assault weapons for ten years, and deaths from mass shootings fell,” according to CNN. If the U.S. banned these weapons again, it is more than likely that the amount of mass shootings would drop once again.

Many conservatives argue that Americans are allowed to have guns because of the Second Amendment of the Constitution. This amendment states, “a well regulated militia, being necessary to the security of a free state, the right of the people to keep and bear arms, shall not be infringed.” This amendment does not translate to modern day Americans. It was ratified in 1791, when the “arms” being referred to were muskets, and people needed guns to hunt and protect themselves from the wilderness.

However, we now live in a much different time. A time in which parents have to worry about sending their child to school because school shootings are so common.
It is vital that gun laws have stricter requirements for owning a weapon. Politifact.com notes that “federally licensed gun sellers are required to run background checks, but not all sellers are required to be licensed, and some of those unlicensed sellers sell at gun shows.” This is incredibly dangerous. As long as you are buying from an unlicensed seller, you can buy any gun you want with no background check. This enables dangerous people to buy guns and get away with it, allowing them to kill innocent people.

Background checks should be required for any person to buy a gun. Assault weapons should also be banned altogether. While this will not completely stop mass shootings from happening, the number of innocent victims that would be killed would be less because the shooters would have to rely on weapons with a slower rate of fire, namely bolt-action rifles and handguns. Those weapons also carry less bullets in their magazines, reducing the number of victims.

In Canada, prospective gun purchasers must participate in a background check and take a public safety course. Implementing a federal law like this would be beneficial to the American people. People with a history of violence would be stopped from purchasing a gun by the background check, and all purchasers would be educated with the safety class. We need to be proactive in making gun laws and stop waiting for the next tragedy to erupt and cause us to ask ourselves, “What could we have done to prevent this?”

Caitlin Kennedy is an Entertainment Editor for The Patriot and jcpatriot.org.