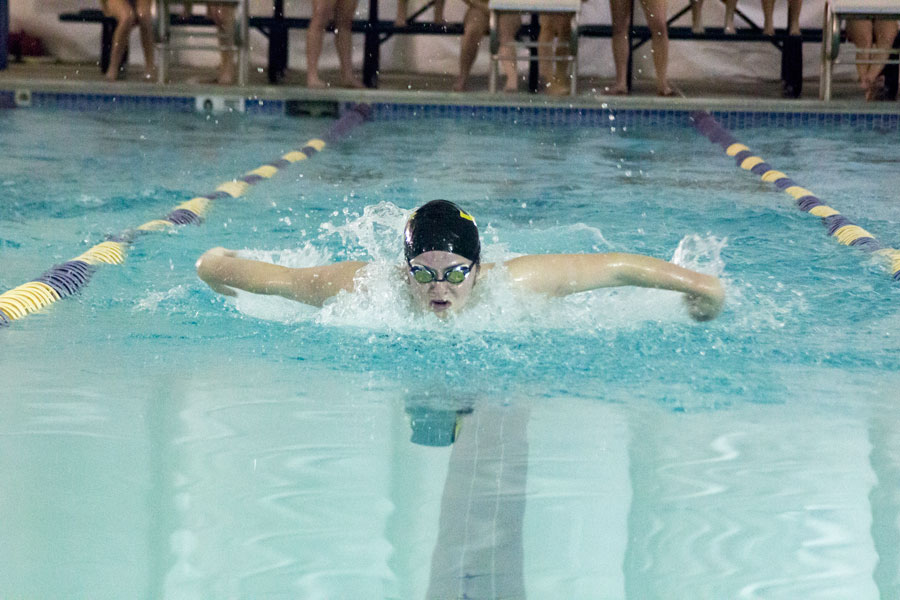 Sophomore Katie Smith swims butterfly in the 200m IM at a meet at the Severn School.

Swimming season comes to a close

With the loss of a handful of key swimmers, this year’s swimming team placed their focus primarily on team-building and team-restructuring. The men’s team finished the season with a 1-7 record, while the women’s team finished with a season record of 1-3.

Although the teams struggled to succeed, junior Luke Ensor asserted that if the team continued to stay together as a team, they could have the potential to improve. “I think if some of our kids stay around, we’ll improve next year,” Ensor said.

Even though this season’s main focus was improving their overall performance, championships showed that the team had come together as a team. “They performed better at championships than last year’s team. [Next year] we should be the strongest we have been in the last three years, even though we are losing our top female swimmer,” swimming head coach Larry Dukes said.

Junior Maddie Fraiji felt the team did well, considering the absence of last year’s key swimmers. “I thought we did well [and] improved on previous years. We’re losing a few seniors, but we have some strong juniors,” Fraiji said.

As a second-year swimmer, sophomore Alexander Kirkland shared a similar sentiment regarding the team’s overall improvement. “The meets were rough, but it was definitely better than last year because last year we had a few seniors and a few sophomores. I think if everyone who swims this year stays and we get some freshmen who swim, we’ll do better meet-wise,” Kirkland said.

The team’s championship performance gave Dukes more confidence in his team as a whole, but he concurred with Kirkland regarding result of more commitment. “If all of our younger people stay with it, we’ll continue to improve,” Dukes said.

James Keller is a Copy Editor for The Patriot and jcpatriot.com.

Swimming season comes to a close