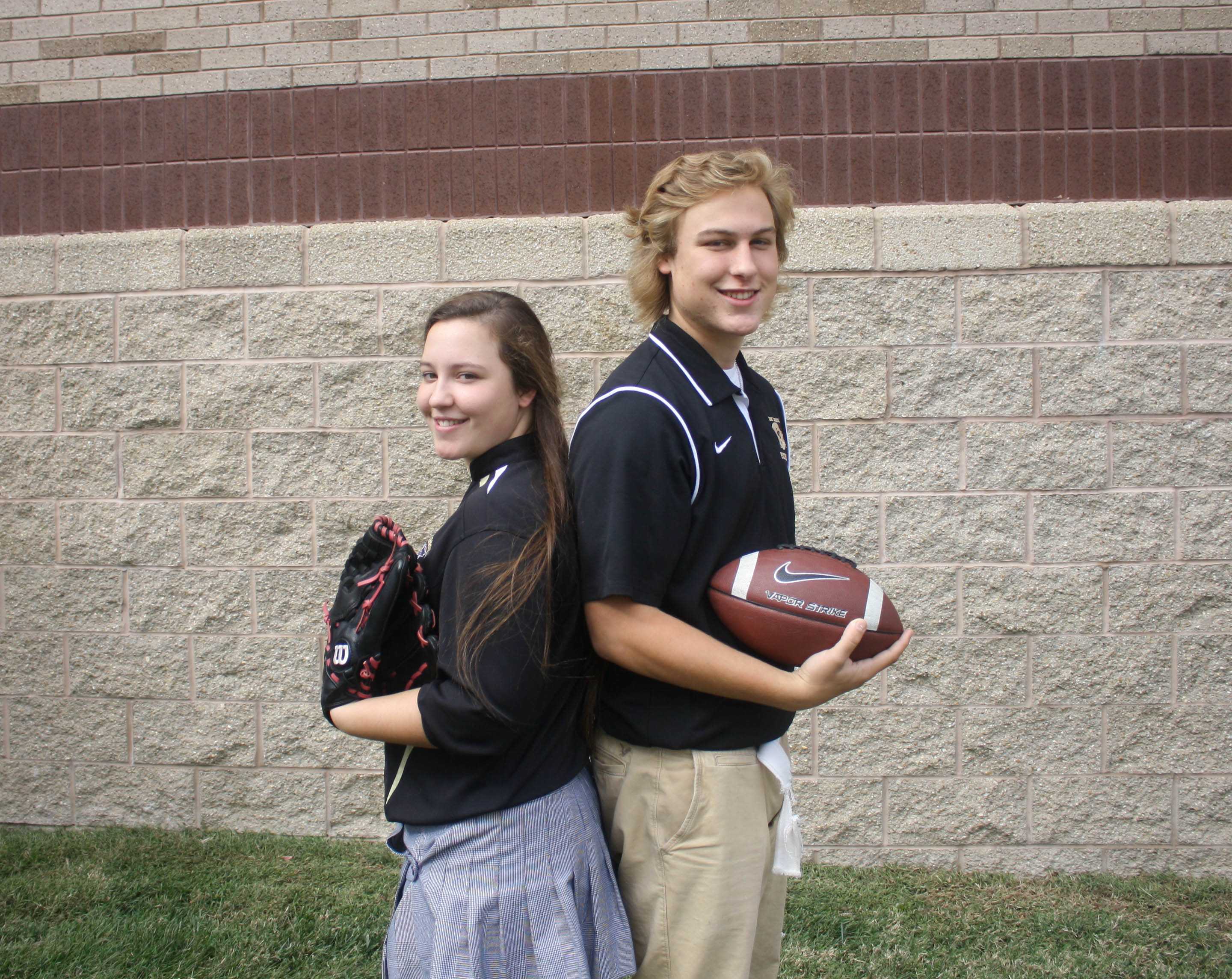 Senior Sean and Amanda Nastalski stand back to back representing the sport that they play. Although twins, Amanda and Sean are different in most aspects of their life. (Hanna LeBuhn)

Senior Sean and Amanda Nastalski stand back to back representing the sport that they play. Although twins, Amanda and Sean are different in most aspects of their life.

Most people know how it feels to live with siblings, but what about twins? What about triplets? The JC community has multiple students who tell what it is like to live with a sibling of the same age. Read more to find out about their lives.​

Wait, you guys are twins?

For seniors Sean and Amanda Nastalski, this is a question they get asked … all the time.

“Besides looks, we’re different in a lot of ways,” Sean said. “Amanda tries a lot harder in school, and I’m more focused on things like football.”

“We definitely have separate groups of friends,” Amanda said. “Even though we’re not together in school a lot, it’s really nice to have someone there all the time no matter what.”

“We are definitely much closer at home than we are in school,” Sean said.

The fact that few people realize that they’re twins has allowed each of them to branch off and do their own things.

Apart from school, Amanda and Sean find other positives in being twins.

“For the most part, having a twin is just like having any other sibling,” Sean said. Amanda agreed.

Sean and Amanda have a older brother as well, but they claim that they are closer because they can relate a lot better. Having a sibling, let alone a twin, means they experience the same things together.

“I like that we go through everything at the same time because you’re really never alone,” Amanda said.

Although having someone always by your side is mostly a positive thing, both Sean and Amanda admit that they hate having to share a birthday. “When we were little, we used to always do combined birthday parties,” Sean said.

“It’s probably the worst part about having a twin,” Amanda said.

Despite the fact most people don’t even recognize them as twins, they enjoy being able to experience things at the same time.

According to Sean, having a twin has made the college process a little easier because you have your sibling going through the exact same thing.

“We’ve looked at some of the same schools, but have different ideas of where we want to go,” Amanda said.

No matter where they end up in the future, both Sean and Amanda agree that having a twin is something they wouldn’t trade.

“I’m glad we’ve been able to go to the same school together,” Amanda said. “We care about each other like any other sibling, but I think we’ll always have a stronger bond.”

Hanna LeBuhn is the Print Chief for The Patriot and jcpatriot.com

Getting ready to wind down from a day at the summer camp, sophomore Caleb Olsen discovers a challenge when he goes back to find his belongings. One of his triplet siblings, sophomore Iain Olsen, relocated his clothes and bunk to the woods.

“It was really when I wanted to shower,” Caleb said. “I was [gross] from working all day.” According to Caleb, his brother had an accomplice to help hide his belongings.  This was added to the long list o f sibling pranks. 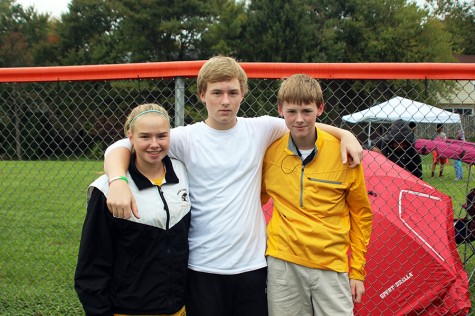 To make sure there wasn’t any confusion of the date, Iain said that the date is “for all of us.”

However, Caleb thought that their birth date was apparent. “Wow, we’re triplets, thank you,” Caleb said.

These three siblings do not look alike, nor do they want to. They all recoiled at the thought of looking identical. “I like being me, I don’t want to be confused with him or her,” Caleb said.

According to the Olsens, they do not get along as well at home as they do in school. Of course there are a few times in public they clash. For example, Iain resents being triplets when his brother “embarrasses [him] in public.”

In addition, Caleb doesn’t like being the same age when “put into groups because [they] have the same last name, so [the three] are always together.” This was affirmed firmly with nods from both Mary and Iain.

Not to mention, according to the three of them, they don’t resemble each other enough to be thought of as triplets, so the Olsens are always bombarded with shocked reactions when informing others.

“That’s the most awful thing,” Caleb said. “After fifteen years it’s just like, ‘yeah, yeah we are.’”

The Olsens are also on the school’s cross country team this year. The previous year, Mary was a part of the play production. However, Mary joined track after she decided she didn’t want to continue with the play.

Caleb and Iain weren’t originally planning on joining cross country either.  According to Iain, “[they] tried out [for soccer] and got cut.”  In order to have a sport in the fall, Iain joined the cross country team.

“Caleb wasn’t going to run until coach [Mike Monaghan] made fun of him,” Iain said.

One day when Iain showed for practice and Caleb didn’t join him, Monaghan asked of his whereabouts, having heard Iain had a brother.  After being told that Caleb “didn’t feel like coming,” he replied that Caleb must be the weaker of the two, according to Iain. Suddenly the team added another member.

Their differences don’t stop at only their appearance.  Mary wants to be a veterinarian, Caleb an environmental scientist, and Iain an engineer.

According to Mary, “we’re triplets but it’s still like we’re our own selves.”

Elizabeth Driver is a Copy Editor for The Patriot and jcpatriot.com

From birthdays to bathrooms, the Conits twins share everything. Freshmen Ariana and Dimitria are always, always together.

“[We] don’t really know anything else,” Dimitria said. From cheerleading during middle school to cross country in the fall of their freshman year, these girls like to do the same thing. They “like to work together” and compete with each other on “the littlest things,” Dimitria said.

“When we run at home, [Dimitria] will [continually] race me,” Ariana said.

Outside of sports, Dimitria and Ariana agree that the most annoying thing about being a twin is definitely sharing. Or people mixing them up. Or always being together.

“It can be annoying to have a twin,” Ariana said. “You always have to share something.”

Additionally, their friends, teachers, and even parents mix them up. “It’s annoying because they are my parents,” Dimitria said.

However, their older sister Marina, class of ‘14, never mixes them up.

Ariana and Dimitria feel a bit closer with each other than their older sister. According to Ariana, they both think that they have an individual and “different, separate bond with Marina.”

According to Dimitria, they “always base decisions off each other.” When Dimitria wanted to start running, Ariana reluctantly agreed because they always do everything together.

After high school, they both plan to either pursue law or interior design.

“I kind of want to be separated [for college],” Dimitria said.

“[Being separated] would be weird though,” Ariana said.

College would be a new experience if separated, considering they currently have all but two classes together and have always gone to school together.

For the most part, the twins have a similar personality. Although, Ariana thinks that Dimitria is “a bit bossier,” while Dimitria thinks that Ariana is a “little quieter.”

Besides slight differences, the twins know that they are almost identical in personality and style. “We share clothes … mainly clothes,” Ariana said.

“We get the same grades. We usually study together,” Ariana said.

“We make flashcards [together],” Dimitria said.

They always know what the other twin is feeling, “all the time,” they said, at the same time.

“This one time we were both on our phones [separately] and we saw a picture and we both said the same thing at the same time. It happens a lot,” Ariana said. They finish each other’s sentences and always seem to laugh at the same thing.

Morgan Taylor is a Copy Editor for The Patriot and jcpatriot.com