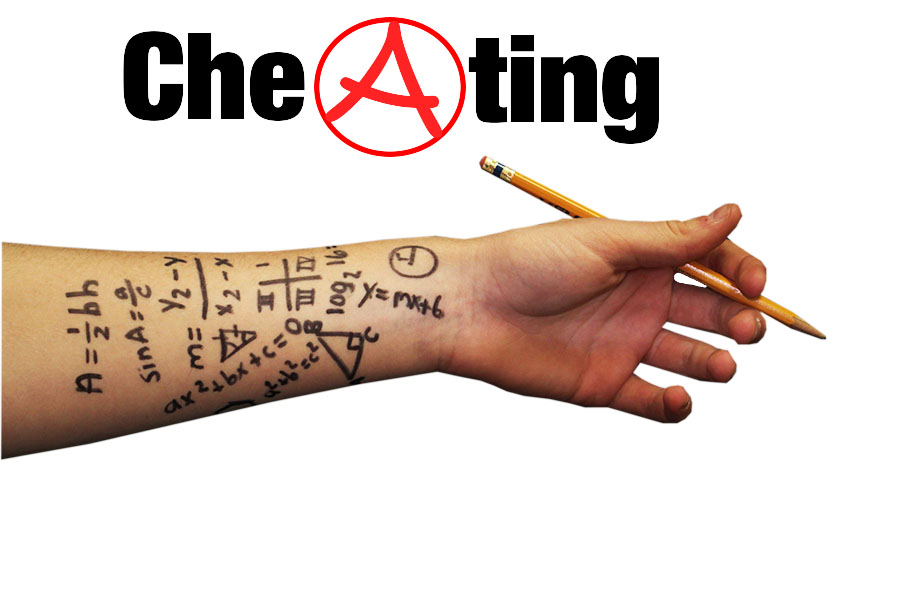 Thoughts circle through sophomore Jane Doe’s head, as she contemplates emailing her friend the answers to her homework. She eventually decides to press send, resulting in more problems than she expected from pressing a little button.

“This person cheated off me by copying my whole English outline for a book because I sent it to him,” Doe said. “I didn’t know what to do but I thought, ‘hey, he’s a friend. I should help him.’”

Since the outlines were noticeably similar, Doe got called to Dean of Students Sean Ireton’s office and was given a detention for cheating.

Doe is an actual student who wishes to remain anonymous, but her situation is not uncommon. Other students have witnessed, gotten in trouble, or even participated in cheating themselves.

A senior, who wishes to remain anonymous, has cheated with different strategies. “I write equations on the inside of my calculator,” she said. “If we have a test with definitions, I write them on a piece of paper and put it on the floor or something.”

According to a survey of students conducted by The Patriot on March 12, 2013, 42 percent of students cheat at least once a school year.

“I think cheating is a problem everywhere, there’s no denial,”  Dean of Students Brian Powell said.

Throughout the years, many teachers have caught students cheating, including Geometry teacher Jean Willan. “You know students are cheating when their answers are identical and nothing like what they should be,” Willan said. “You get a sense [when a student cheats] because they’ll, for example, hand in a perfect homework assignment but they can’t do the actual work in class quizzes or tests.”

According to previous Dean of Students and current Earth Science teacher Tim Perry, some students will ask other students, who took the test before them, what the questions are going to be on the test.

“It all depends on the integrity and character of students who had the test first, and if they’re willing to give up information to other students,” Perry said. “For reports, students might get one from the year before and change a few things, then turn it back in as their own.”

According to The Patriot survey, 85 percent of students cheat because they want a better grade.

With the implementation of Cyber Days, however, the administration has seen an increase in cheating. On March 2, Powell sent out an email to all students and faculty, emphasizing the need to avoid cheating. According to Powell, this email was sent out because of cheating on previous Cyber Days.

“I was concerned because of dealing with plagiarism after Cyber Days,” Powell said. “I wanted the students to think, ‘Am I going to do my own work?’”

According to The Patriot survey conducted on March 23, 73 percent of students believe that cheating is more common on cyber days.

Powell emphasized a quote in his email, which he believes is important: “Students today should be empowered by the amount of information so readily available to them — we should not use it as an excuse to give the minimum effort possible.”

“Information is so easily accessed. We’re in an education that’s not so much ‘knowing,’ but it’s ‘what can you do?’” Powell said. “You won’t be a good ‘do-er’ if you cheat.”

Powell’s goal with sending this email was to help students understand that doing their own work is the best moral solution. “Do your own work, it’s easier,” Powell said. “You can’t steal work ethic or character off of Wikipedia.”

Although cheating is a serious issue, some students look past it. “In Spanish class sometimes people look at my answers,” one freshman said. “But I just decide to let it go because they already took the class a previous year.”

Other students, however, tend to take matters into their own hands. A student who anonymously responded to The Patriot survey said, “someone cheated off my test when they were sitting next to me so I filled in the wrong answers because she cheats from me a lot and never gets caught. After she turned in her test, I changed the answers to the ones I really thought were right. I got an A, and she failed the class.”

If teachers catch their students cheating, they try numerous ways to stop it.

Willan focuses on the importance of the Honor Pledge with her students. “I make my students write the Honor Pledge because most of the time, they feel more obliged to follow it when writing it,” Willan said.

If Perry catches a student cheating, he follows the rules in the Student Handbook. “They get a zero [on the assignment], and I give a detention slip to the Dean. If they’re honest and tell me what they did, they’ll deserve consideration for honesty,” Perry said. “But, they’ll lose my trust and I look at them with more of an ‘eagle eye’ in assignments.”

According to Powell, there are different lengths of punishments for the different cases of cheating. “Punishments can range from two detentions to demerits. If it’s much more serious, it can lead to suspensions, which has happened multiple times,” Powell said. “We judge cheating on a scale, and it depends. We look at everything and try to be fair when dealing with it.”

Overall, teachers do believe that cheating does happen, but how students handle it and their lack of participation shows their integrity.  “If they start [cheating] as a freshman, they keep going as long as they can [before getting caught],” Perry said. “For the most part, our students are good people, but young people don’t want to do the work to get the grade. We have really good people who should be commended for their character and integrity.”

Nicole Arrison is a Video Editor for The Patriot and jcpatriot.com